The St Louis Cardinals are NLDS tyrants: A history

Share All sharing options for: The St Louis Cardinals are NLDS tyrants: A history

I set out to write about how extraordinary the Cardinals have been in the regular season from 2000-2014, and you'll be seeing that post soon enough (here's a teaser: The Birds' 90-win 2014 dropped their average number of wins per season slightly from 2000 on. This is a golden age, people.), but I kept finding myself distracted by a remarkable number: .800

That's the Cardinals' series winning percentage in 10 NLDS appearances from 2000-2013. They are 8-2, and those eight wins are a bigger number than any other team has made appearances, except sad old Atlanta, who made eight appearances with just a single series win to show for it. We won't speak of their wild card game appearance so as not to embarrass them further.

Not only have the Cardinals been nearly perennial participants in the playoff's first-round dance, but they've dominated their partners, winning four times for every loss they have recorded. 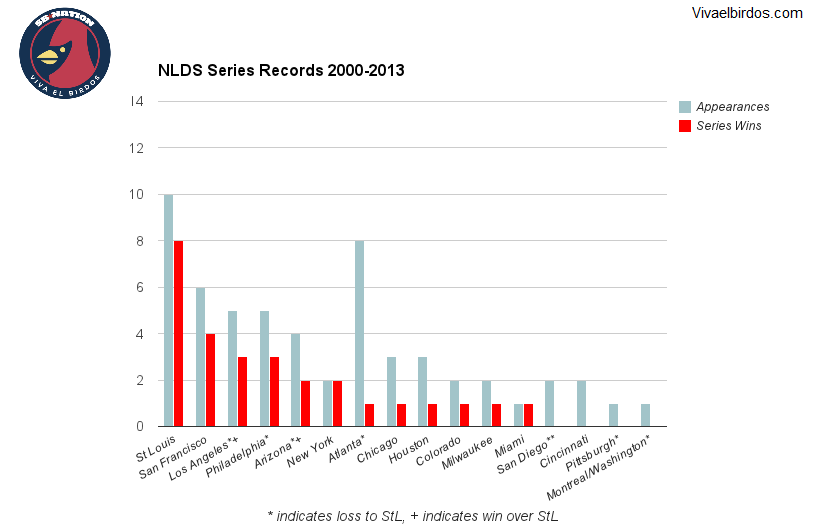 All together, the new millennium Cardinals have sent seven teams home in the NLDS alone, including the Padres twice.

This success is especially remarkable when we consider that the Cardinals have not been anything special after the NLDS. They are 4-4 in the NLCS and 2-2 in the World Series. .500 in the post-season is a perfectly good result, in fact it's probably what should be expected over any reasonably large number of series, but there's nothing expected about 8-2.

So this hasn't been a case of the big kid picking on the little kid. This has been two big kids getting together to fight after school, and time and again, one of them puts up his fists and the one with the red hat pulls out a knife.

Greg Maddux and Tom Glavine finished second and third to Randy Johnson in the Cy Young that year. The Cardinals were not impressed. They score six runs in the first inning of game 1 off of Maddux, adding another later, and matched that with seven runs in game 2 off of Glavine. Future and past Cardinals Rafael Furcal, Brian Jordan, and Reggie Sanders were on the losing side, while Eric Davis and Will Clark were in their Redbird cameos. The Cardinals OPS'd .870 against the Braves' famous pitchers, and outscored Atlanta 24-10 over the three games. Mark McGwire, Jim Edmonds, and Will Clark homered.

Albert Pujols' first post-season lasted just a single series, as the Diamondbacks took games 1,3, and 5, those bookend games notable as a pair of memorable pitchers' duels won by Curt Schilling over Matt Morris. Woody Williams out-dueled Randy Johnson in game 2, and Pujols, Edmonds (2), Drew, Renteria, and Fernando Vina all homered for the birds. Arizona would go on to win the world series on the backs of their two aces.

The 2002 Cardinals had their revenge, sweeping away the defending champs, as Matt Morris, Chuck Finley, and Andy Benes plus a host of relievers stifled the Diamondbacks to just six runs total. Once again, Jim Edmonds homered, as did JD Drew and new Cardinal Scott Rolen.

The 2004 offensive juggernaut made quick work of the Dodgers, scoring 22 runs in games 1,2, and 4, with a Jose Lima CGSO for the Dodgers in game 3 providing the sole bright spot for Los Angeles. Woody Williams, Matt Morris, Jeff Suppan, and Jason Marquis made starts, while Dan Haren showed up out of the bullpen. Once again, Jim Edmonds hit a dinger, and joining him in the fun were Albert Pujols (2), Reggie Sanders, Larry Walker (2), and some guy named Mike Matheny.

Once again, the offense powered the Cardinals through the NLDS easily, scoring 21 runs in just three games. Chris Carpenter started and won game 1,  Mark Mulder and Matt Morris did the same for games 2 and 3. Woody Williams appeared for the Padres, and took some lumps in game 3. Guess who hit a homer? Yes, Jim Edmonds. So did David Eckstein and Reggie Sanders. Albert Pujols settled for a 5 for 9 series with two doubles and four walks.

Chris Carpenter led the way with 13 and a third innings in games 1 and 4, allowing just a total of three runs and picking up a win each time out. Woody Williams was hit hard again, and Chris Young was the only Padre starter to last six innings. Adam Wainwright got a save in game 2, and Ronnie Belliard provided a lot of offense for the Cardinals with a nifty 1.072 OPS for the series. For some inexplicable reason, Jim Edmonds did not hit any homeruns, but Albert Pujols and So! Taguchi! did. The Cardinals, of course, would go on to claim their tenth WS crown.

After sitting out 2007 and 2008 just to let the other guys have a turn, the Cardinals returned to the playoffs in 2009, but didn't last long, as the Dodgers handed the Cardinals their only NLDS loss other than 2001 (the Birds swept the Padres in 96,  their only other appearance in the Divisional Series era). Adam Wainwright's 8 inning 1 run gem was the highlight of the series, and Ryan Franklin blowing the save with help from a memorable misplay by Matt Holliday was the lowlight. Clayton Kershaw was the Dodgers' starter that game, and pitched well, though he allowed the lone Cardinal homer of the series, a second-inning blast by Matt Holliday.

A special series opened a special playoffs for the 2011 Cardinals. There was good pitching and bad pitching, good hitting and bad hitting, rally squirrels, chants of do it for torty! and the buzzsaw of Hallday, Lee, Hamels, Oswalt to contend with. Somehow, the Cardinals beat Cliff Lee in game 2, and Oswalt in game 4 without getting any especially dominant performances from their starters. Lance Berkman and David Freese homered for the Cardinals that series and Octavio Dotel snuck in a pitcher win, but all of it was just setting up one of baseball history's greatest elimination game pitcher's duels. Against Roy Halladay, the Cardinals' lone run was scored as Rafael Furcal hit a lead-off triple and Skip Schumaker drove him in. Chris Carpenter's three-hit Complete Game Shutout made it stand.

The Cardinals' 2012 NLDS game five victory over the Nationals was one of the most dramatic come-from-behind elimination game victories in history, but coming as it did on the heels of 2011's world series game six, it loses a little of its luster, which is a shame. It was an extraordinary game. Setting it up were two tight victories for the Nationals in games 1 and 4 behind strong pitching, and a pair of Cardinal blowout victories in games 2 and 3 behind a 20 run outburst. Carlos Beltran (2), Daniel Descalso (2), Allen Craig, and Pete Kozma all homered for the Cards in the series, but they were not the problem for the upstart Nats in game 5. In Washington, the Nationals jumped on Adam Wainwright for six runs before he could record two out in the third inning, dropping the Birds' win expectancy to just 4%. The Cardinals chipped away at the lead with a run in the fourth, two in the fifth, one in the seventh, and another in the top of the eighth brought them to within a run as Joe Kelly, Trevor Rosenthal, Edward Mujica, and Mitchell Boggs kept the lid on the Nats' offense. However, things looked bleaker again as Jason Motte allowed Washington to stretch the lead back to two runs heading into the ninth. But the Cardinals rallied against Drew Storen and kept their season going by scoring four runs with two outs, including the tying RBI from Daniel Descalso on a single off Nationals' SS Ian Desmond's glove, and the winning RBI on a single to right by a warlock named Pete Kozma.

The Pirates looked likely to win their first playoff series in a generation after they took a two games to one lead with game four in Pittsburgh, which featured one of the most memorably boisterous crowds in recent memory. Games 1 and 2 featured a blowout for each team, as Adam Wainwright and Gerrit Cole each shone while AJ Burnett and Lance Lynn struggled. Carlos Martinez took the loss in game 3 after Kevin Siegrist allowed a pair of inherited runners from El Gallo to score in the bottom of the eighth after Carlos Beltran had tied the game in the top. However, Michael Wacha tamed the Pittsburgh crowd as he, Martinez, and Rosenthal combined to allow just a run on three hits in a 2-1 victory. Adam Wainwright easily out-dueled young Pirates star Gerrit Cole in game 5 back in St Louis, as the Cardinals cruised to a 6-1 win. The series featured homeruns by Matt Adams, Carlos Beltran (2), David Freese, Matt Holliday, and Yadier Molina.

None of the above matters a bit starting tomorrow, as the Cardinals prepare to face the Dodgers in their 2014 NLDS series, but nothing that can happen this week will change the fact that the Cardinals have been not just good in the opening frames of their many recent post-season appearances, they've been special.