What should we expect from Yadier Molina's hitting in 2014?

Here, we take a look at Yadi's hitting statistics and approach from 2011 through 2013. We'll conclude by looking at his projections for 2014.

Share All sharing options for: What should we expect from Yadier Molina's hitting in 2014?

I have always found it fascinating to keep track of Yadier Molina's development as a hitter—especially over the last three seasons. Two and a half years into his career, Molina had a .238/.291/.341 slash line. This mediocrity at the plate obviously did not deter then manager, Tony La Russa. He was later quoted in saying that Molina would have been his starter even if he had a .000 batting average. Well, to put his on-base percentage into perspective, Pete Kozma's career OBP sits two points higher at .293. Needless to say, he wasn't scaring any pitchers when he strutted his way to the plate.

This sure has changed, hasn't it?

Looking at his spray chart: 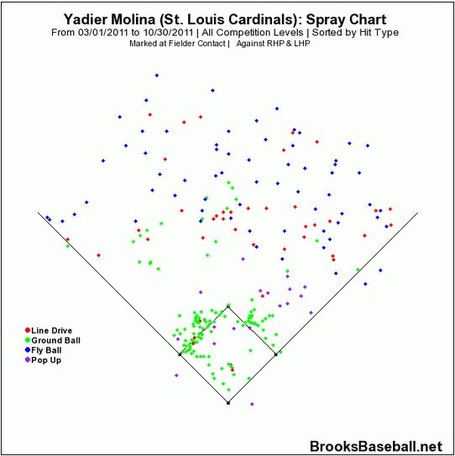 What about his actual hits? There is another chart for this, but I did not want to overwhelm you with pictures instead of actual analysis, so you can check out his player card here if you desire. As predicted, the overwhelming majority of his home runs in 2011 were when he pulled the baseball. This shouldn't surprise any of us considering there are few hitters than hit opposite-field home runs on a consistent basis.

However, after looking at the rest of the data points, it is apparent that there is a shift going on towards right field—mimicking what we saw in his line drive spray chart. It appears the majority of his singles were up the middle and evenly distributed to right- and left- field. Finally, without getting into the actual percentage, it also appears that his doubles have a slight lean towards right as well.

After looking at two different charts from BrooksBaseball, giving them both the good ole eye-test as well using simple math calculations, I feel safe in saying Molina's approach throughout 2011 was to go the other way. However, he pulled the baseball when the pitches deemed it necessary—especially for home runs.

Was his approach at the plate any different from 2011? Let's have a look: 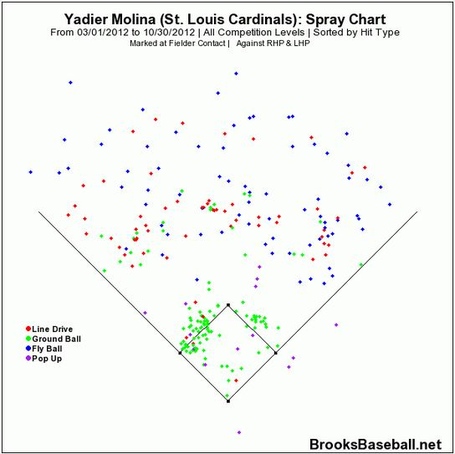 The hit result chart (found here) seemed to follow his line drive chart which makes sense considering line drives led to a higher percentage of hits A quick eye test shows that this 2012 chart has many more dots on the left-side of the outfield compared to the chart from 2011. With roughly 70% of his doubles occurring when he pulled the baseball, it appears that the statistics successfully back up the eye test here.

Molina started 2013 on fire, but he was eventually slowed by leg injuries and potential overuse behind the plate. He somewhat limped his way to a .319/.359/.477 slash line. He may have set a new career high in batting average, but both his on-base percentage and slugging percentage were less than they were in 2012. He again finished third in the MLB with a .362 wOBA—behind Carlos Santana (.364) and Mauer (.383). He had 44 doubles, 12 home runs, and 80 RBI.

Did he stick with the pull-hitter approach from 2012 or did he revert back to going the other way like he did in 2011? 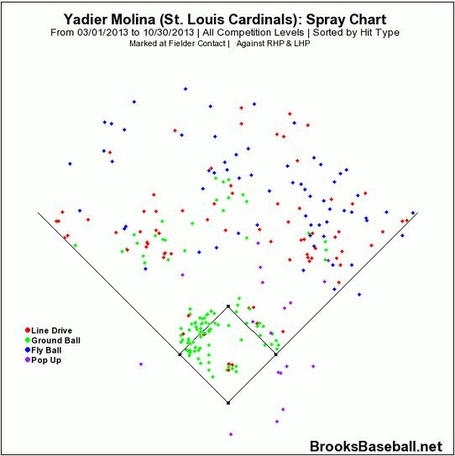 So what should we expect from Molina at the plate in 2014?

With Molina turning 32 years old in July and the fact that he has caught nearly 10,000 innings in his career, we shouldn't be too surprised by some statistical decline It appears the 2014 ZiPS Projection for Molina from Dan Szymborski has taken these two factors into account. ZiPS projects him to have a slash line of .293/.342/.433 with 31 doubles, 13 home runs, and 73 RBI. With his defense, leadership, and relatively cheap contract (comparatively), these projections are nothing to be mad about. Though still very good production from a guy as important as Molina, no one will deny the fact that these numbers are slightly lower than what we saw from 2011 through 2013.

With possible age-related decline along with the usual wear-and-tear put on a catcher (especially an overused one), we can all expect slower bat speeds in the future. Because of this, I wouldn't be surprised if Yadi takes an approach similar to those he had in 2011 and 2013—going up the middle and to the opposite field.

What do you expect from Molina's hitting in 2014?