During St. Louis Cardinals first baseman Matt Adams's rookie season, he saw more and more extreme defensive alignments as the season progressed. The opposition saw something in the lefthanded slugger's batted ball profile that led them to move their shortstop to the center of the infield, if not the right side, and their second baseman to shallow right. What was it?

Using the Fangraphs spray chart for Adams's big-league batted balls makes it pretty clear why the opposition chooses to shift its infield so that it covers shallow right field as well as the middle of the field. The majority of Adams's grounders are pulled to the left side. This isn't only true of grounders, though. Adams also hits a fair amount of liners to shallow right field where the opposing second baseman is sometimes lying in wait due to the shift. It also seems likely, given the Isolated Power (ISO) splits for Adams and most batters, that the first baseman's pulled grounders are hit hardest. With his speed (or lack thereof), the opposing second baseman can play deeper and be able to make plays on more grounders than he likely would have if he played a more traditional keystone location. With his batted-ball profile and slow speed, Adams is a very good candidate to employ the shift against.

For some perspective on Adams's batted-ball tendancies, a comparison of the average 2013 MLB lefthanded batter's spray share compared to that of Adams last season: 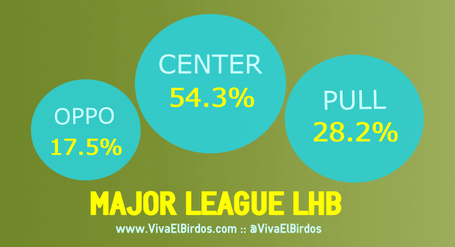 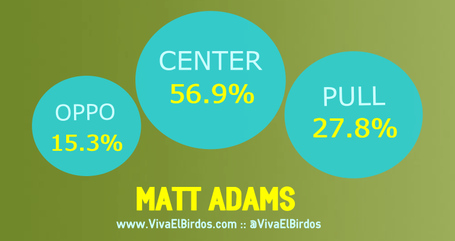 As you can see, Adams batted the ball back up the middle of the field a bit more often than the average lefty. He also pulled the ball slightly less often overall than MLB lefthanded batters did. Adams struck the ball to the opposite field about two percentage points fewer than average.

Now let's consider how Adams as compared to the MLB lefthanded batted average when he pulled the ball, hit it up the middle, or took it to the opposite field.

The aspect of Adams's batting profile that immediately jumps out is the mammoth power he showed when pulling the ball. The opposition can position their infield however they like. But if Adams swats the ball over the outfield wall, it's all for naught. Adams himself summarized this reality in R-rated fashion last season after smacking a homer:

Of course, the other way Adams can eff that shift, so to speak, is by shooting the ball to the opposite side of the field. This was something he demonstrated an adeptness at last year, even if it was comparatively rare. Whereas his fellow lefty batsmen were at their worst when hitting the ball to left field, Adams did well when he went oppo even if there was an understandable drop in power.

Adams has a lovely swing that allows him to hit the ball to all fields and with exquisite power. If the Cardinals' competition on any given day elects to deploy an extreme defensive shift against the lefthanded slugger, there are two ways he has shown he can beat it: (1) driving the ball a long way, and (2) hitting the ball to the opposite field. In 2014, he'll have to do both to be successful.