The Hitting Profile of Matt Adams

Matt Adams was a tremendous force against righties in 2013, but he struggled immensely against lefties. Will he make the necessary adjustments in 2014? This remains to be seen, but in the meantime, let's take a closer look at his hitting profile from 2013.

Share All sharing options for: The Hitting Profile of Matt Adams

Matt Adams was quite effective against right-handed pitching in 2013. However, he left much to be desired when lefties were on the mound. As a power-hitting left-handed bat, this isn't necessarily unexpected, but a better approach could likely lead to better results. Before we get into this "better approach" I speak of, let's take a look at his 2013 splits (via Fangraphs) and then his slugging percentage heat maps first.

Adams was 22nd in the MLB (with a minimum of 250 plate appearances) in slugging percentage against righties. His 20.9% HR/FB ratio against righties ranked 12th in the league. To be frank, Adams was in the top 15 or 25 in the majority of hitting statistics when facing righties in 2013. However, this was obviously not the case against lefties. I realize it is a much smaller sample size (just 52 PAs), but the drastic disparity between each split is somewhat alarming.

His slugging percentage heat map against righties in 2013: 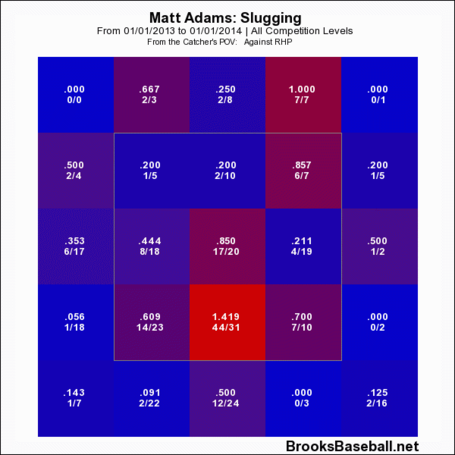 With righties on the mound, Adams absolutely feasted on pitches middle-down—as shown by his 1.419 slugging percentage in the bright red box. Eight of his 14 regular-season home runs came on pitches in this zone. Following the good ole eye test, many power-hitting lefties tend to be pretty successful on pitches down in the zone, so this did not surprise me. What did surprise me was how well Adams hit pitches up and in—his second and third highest slugging percentage zones on the map. Was this a statistical anomaly due to a somewhat small sample size or does Adams have something built into his swing to make him effective on pitches up and in?

His slugging percentage heat map against lefties in 2013: 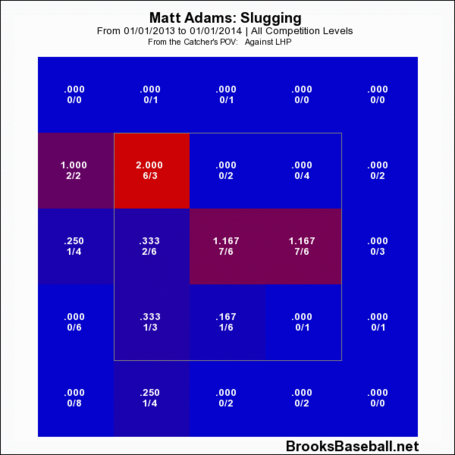 Not surprisingly, he loved pitches in the middle of the zone—as shown by the two reddish boxes containing a 1.167 slugging percentage. He also had some success on pitches up and away, but as you can see, the rest of his "heat" map is actually quite "cold"—ranging from bright blue to dark blue and looking more like batting averages than slugging percentages. Going along with his splits, this is obviously much less impressive than how he performed against righties.

The heat map takes into account all pitches from lefties—fastballs, cutters, changeups, sliders, etc. Did he have any success against breaking balls or off-speed pitches? Well, this graph is very telling (Follow that link. I did not provide the graph because I wanted to build up some suspense). He had just one hit against lefty breaking balls/off-speed pitches in all of 2013, and it was a mere single. Thus, all the red/purple in the above heat map can be 100% attributed to fastballs and its deviations (sinker, cutter).

At the Winter Warm-Up, he told the media that he worked on hitting lefties and their breaking balls all off-season. However, let's face it. Adams may never be that successful against lefties, but with production like he had against righties, that's okay. Yet, there is an easy fix he can incorporate into his 2014 approach: lay off those unhittable pitches (that are often out of the strike zone) down and away.

If a lefty pitcher throws a good (or even decent) breaking ball, Adams will likely never hit it, and that's not really his fault. If he does hit it, it likely won't amount to anything productive. Because of this, he should focus on mistake pitches (i.e. hanging breaking balls) only and completely forget about breaking balls down in the zone (unless there is two strikes of course). Let's take a look at this point through the use of the following graph.

Whiffs per Swing versus LHPs' Sliders and Curveballs: 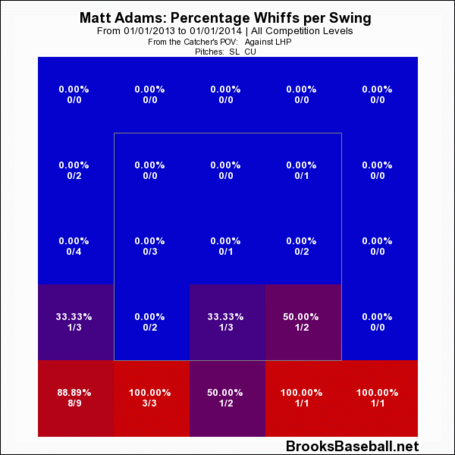 Adams faced 26 breaking balls in the bottom two rows of the map, and he swung and missed on 17 of them. With a whiff rate of 65.4%, a good start to his 2014 approach would be laying off breaking balls in these zones. By laying off these pitches, it will lower his strike-out rate (36.5% against lefties), and it will raise his on-base percentage.

As shown by his batting average matching his on-base percentage, Adams did not walk a single time against lefties in 2013. It was only 52 plate appearances, but I still found this quite odd. I looked into it further on BrooksBaseball.net and found that Adams faced 24 pitches with a three-ball count last season, and more than likely, he ended up swinging the bat. That means he had 24 chances to draw at least one walk and yet he never did. That's unfortunate, but a large part of this can be attributed to his approach against lefties in his rookie season.

Head on over to Rui's projection post and let us know if you haven't already.

Credit to BrooksBaseball.net for the heat maps and Fangraphs for the statistics used in this post.