The Brewers will pay Matt Garza at least $50 million over the next four seasons. Lance Lynn will earn a fraction of that with the Cardinals.

Share All sharing options for: Matt Garza's Contract with the Brewers Shows Just How Valuable Lance Lynn is to the Cardinals

The Milwaukee Brewers and free agent righthander Matt Garza finalized a four-year contract worth at least $50 million over the weekend. Reports of a finished deal between the two parties were tweeted last week, which the Brewers publicly denied while also stating negotiations were ongoing. The two sides finally entered into the largest free agent pitcher contract in Brewers franchise history on Sunday, relegating Jeff Suppan to footnote status in the annals of the Brew Crew. This deal shows us just how valuable Lance Lynn is to the St. Louis Cardinals.

First, let's distinguish Garza from Lynn. The newest Brewer has been a big-leaguer since 2006. He's made 191 starts in the majors and tallied 1,182 1/3 innings pitched. Garza has track record in MLB that Lynn does not.

For a pitcher, having a track record means usage. The wears and tears of repeating the unnatural motion of throwing a baseball thousands of times each year takes a toll on the body. Garza has had some problems with his pitching elbow:

There were some reports that concerns over the health of Garza's throwing elbow were what held up the deal over the weekend.

Lynn lacks both Garza's 191-start track record and the wear and tear that comes with it. Other than that, the two pitchers share a similar profile. This includes, to a degree, platoon splits. While Garza has not always shown a split between his performance against lefthanded and righthanded batters, one has emerged the last two seasons. That being said, Lynn's is even more pronounced than Garza's.

For example, lefthanded batsmen posted a .340 Weighted On-Base Average (wOBA) off Lynn in 2013 while righties managed just a .291 wOBA. Last year, Garza held righthanders to a .303 wOBA and lefthanders hit for a .320 wOBA against him. Lynn's 2013 platoon splits were more yawning than Garza's. How does this work out in the end? The two have to date allowed the other team to score earned runs at about the same rate. 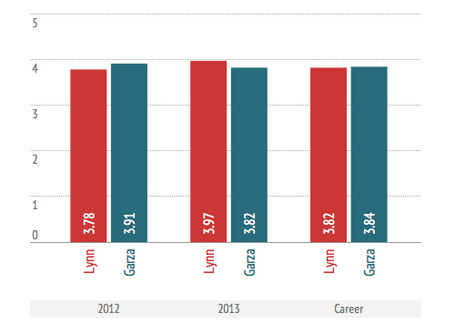 As the above chart shows, if we go strictly by ERA, Lynn and Garza are remarkably similar pitchers. Run prevention is what pitching is all about, so it's fair to tie the two righties together based on the rate at which they allow the opposition to plate runs. But their peripherals indicate that Lynn might be a better pitcher than Garza as the two prepare for the 2014 season. 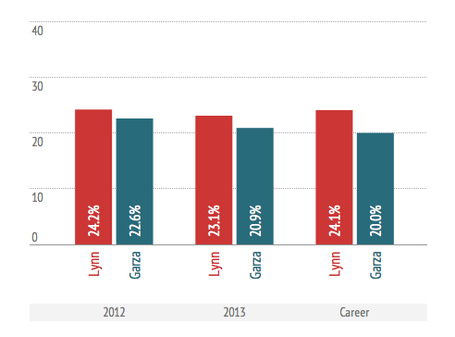 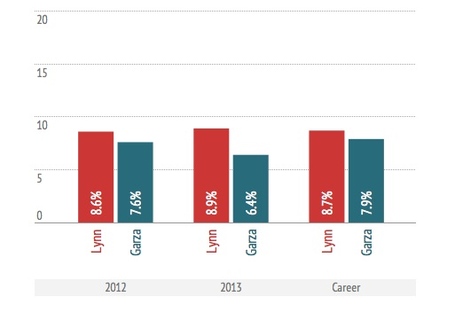 As the two charts demonstrate, Lynn strikes out opposing batters at a higher rate than Garza while the newest Brewer issues walks at a lower rate. This results in Lynn's 2.77 K/BB over his career being a bit better than Garza's 2.55. 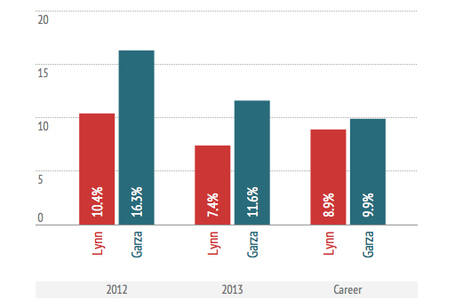 Fielding Independent Pitching (FIP) is calculated using only those outcomes that a pitcher has control over: strikeouts, walks, and home runs. Given their respective K/BB and HR/FB rates, it's not much of a surprise that Lynn has a lower FIP than Garza. 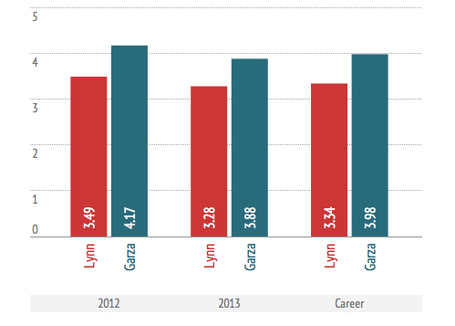 To be sure, Lynn has posted his lower FIP while pitching his home games in the run-suppressing confines of Busch Stadium while Garza has pitched most recently in the comparatively hitter-friendly ballparks of Wrigley Field and the Ballpark at Arlington. FIP- is a stat which compares a pitcher's performance to that of the league as a whole while adjusting for park effects. It is scaled to 100 with each point below 100 being one percentage point better than average and each point above 100,equaling a percentage point below average. In 2012, Lynn posted a 92 FIP- while Garza's was 103. Last year, Garza's FIP- was 95 to Lynn's 90. After adjusting for park effects, Lynn was still the better pitcher by FIP.

We know that a pitcher's FIP in a given year is more predictive of his next season's ERA than is a pitcher's ERA. It's true that some pitchers can establish a skill for defying FIP by allowing runs at a rate below the level at which his FIP suggests he pitched (e.g., Tom Glavine) and others can defy FIP in the opposite way, by allowing runs at a rate higher than his FIP indicates he should (e.g., Ricky Nolasco). These cases are typically exceptions to the general rule of thumb. Applying this rule to Garza and Lynn, the Cardinals' righty ought to have a better 2014 than the Brewers' new $50 million man. And Lynn will do so while earning something less than $600,000.