And you thought the Cardinals rid themselves of WIG last July.

It is a common practice in political circles to release damaging or controversial news to the media late in the day on a Friday. In that time-honored tradition, news broke on Twitter late in the afternoon yesterday that the Miami Marlins had agreed to a minor-league contract with former St. Louis Cardinals out- and error-maker Ty Wigginton. The Marlins-WIG contract reportedly includes an invitation to spring training in Jupiter, Florida at the complex Miami shares with the Redbirds. And you thought the Cardinals rid themselves of Wigginton last July. 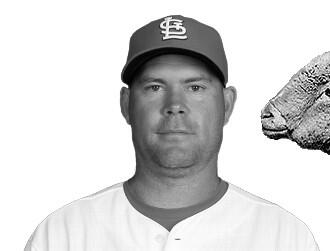 Upon the news that Miami had resurrected WIG, VEB community member cschepers dug up my post regarding last Hot Stove's announcement that the Cards had inked Wigginton to a two-year, $5 million deal. He then described the post as expressing "cautious pessimism." I have to say I'm embarrassed by how evenhanded my assessment of the signing was at the time it became legally binding on your favorite baseball team and mine. Then again, it's tough to get really worked up for the Cardinals' 25th man even when he decides to wear Lance Berkman's No. 12.

In a way, Wigginton demonstrates just how spoiled Cardinals fans currently are. General manager John Mozeliak's worst signing in the last few years was Wigginton (the "Wiggintier" of Mozeliak contracts?). Even when the depths to which Wigginton's baseball skill had plummeted became apparent and Dan Moore postulated his "Unified Theory of Ty Wigginton," WIG was much more a joke than an albatross. A waste of a roster space who couldn't hit or field, sure, but it's not like he played that much and didn't provide a source of amusement. After all, when asked to vouch for Wigginton as a player deserving of a roster spot, manager Mike Matheny touted the veteran's ability to discuss hitting with other players. It was all so farcical that a part of me was actually hoping the Cards would get something out of the $2.5 million they'll be paying Wigginton in 2014 and bring him back as assistant hitting coach (even if that wouldn't work because Wigginton would have to retire to take the job, and would forfeit $2.5 million by doing so).

It's fitting that what may very well be Wigginton's last attempt at the big leagues will come in a setting that is a twisted version of the plot to Major League. The Marlins are not tanking in order to move their franchise to a tropical locale. Indeed, the Marlins already convinced Florida politicians to provide public funds for a ballpark that better generates revenue for ownership in the most tropical of MLB locales. The Marlins ownership plot already having come to fruition, they've sold their talented players on big contracts and put together a shitty team with castoff veterans like Jake Taylor, only worse, and young up-and-comers like Ricky "Wild Thing" Vaughn and Willie Mays Hayes, only better. WIG will fit right in with the Marlins' ramshackle ensemble, at least until he gets a red tag in his locker.