After 33 seasons of managing and three World Series titles, Tony La Russa will enter the Hall of Fame without a logo on his cap.

Share All sharing options for: Tony La Russa's Hall of Fame cap will be without a logo

In a statement released by the Hall of Fame, Tony La Russa wrote:

"The Chicago White Sox gave me my start in the game as a big league manager for my first eight seasons in my 33-year managerial career. In Oakland, we recorded four first-place finishes in 10 years, winning three pennants and a World Series. And in St. Louis, our clubs won three pennants and two titles in 16 years. It's the totality of the success of each of those three teams that led me to Cooperstown, so I am choosing to not feature a logo so that fans of all clubs can celebrate this honor with me."

Alright, that's a completely understandable statement from La Russa. However, lets take a look at his career numbers anyway:

And for the visual learners, here is a pie chart showing the percentages of his regular season wins attributed to three teams he managed in his career: 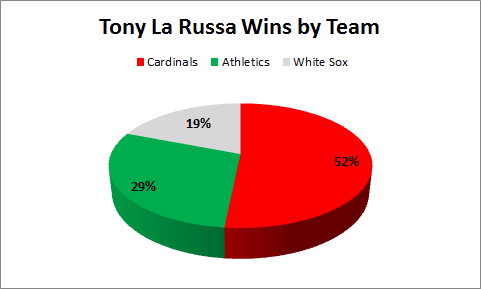 The percentages certainly show a skew towards the Cardinals in terms of regular season wins. However, where would La Russa be if the White Sox did not hire him way back in 1979 (at the age of 34) after his playing career came to an end? After Chicago, he moved on to Oakland where he won three pennants and a World Series title with the Athletics. Sure, he won 52% of his regular season games and two of his three World Series titles with the Cardinals, but to discredit what he did while with the other two organizations is irresponsible.
The fact is this: Tony La Russa was an integral component of three organizations over his 33-year managerial career. Is it unfortunate that he is not going in with the STL logo on his cap? As a Cardinals fan, of course it is, but I cannot help but be understanding.
The Cardinals were fortunate to have him as their leader for 16 seasons. Instead of calling his decision a "slap in the face" like I saw all across the Twitterverse, let's take the time to realize the bigger picture. His Hall of Fame bust doesn't need to have the STL logo for baseball fans around the country to remember the 2006 and 2011 World Series titles.
It was undoubtedly a tough decision, but as one can infer from his statement, he had very solid reasoning behind it. Also, in the end, is it really that big of deal what logo he chose? I would argue that it's not.
Your thoughts?