The Seth Maness sinker: How good was it?

Seth Maness was known for his ground ball-inducing sinker in 2013, but how did he compare to other sinker ball relief pitchers from around the league?

Share All sharing options for: The Seth Maness sinker: How good was it?

Seth Maness used his sinker a lot in his rookie season with the Cardinals. Including the playoffs (note: we will not be breaking down the Jonny Gomes World Series big fly in this post), he threw it 575 times. 137 of these sinkers were put in play, and 102 of the balls in play were ground balls. By simple division, this means that 75% of the time a hitter connected with his sinker it resulted in a ground ball. This seemed like a high percentage, but I decided to compare it to other sinker ball relievers from around the league to see if this was actually the case or not.

I narrowed my search to the top nine ground ball relief pitchers (by percentage and regardless of pitch type) who threw at least 50 innings in 2013. A quick note: Mark Melancon came in at number six with a 60.3 ground ball percentage, but since he no longer throws a true sinker (he has developed a cutter instead), I excluded him from the table. Thus, the players in the table below were the top nine ground ball relief pitchers who relied heavily on their sinker in 2013.

So how did the results of Maness' sinker stack up against those of the best sinker ball relievers in the league? Despite having the third slowest average velocity (90.38 MPH) of the group, Maness' GB% was the second highest, behind just Ziegler of the Diamondbacks—17.74% versus 19.17%. This is a good start, but as I did with Maness, I wanted to see the percentage of balls in play that resulted in ground balls. Predictably, Maness' 75% (calculated in the first paragraph) came in second behind Ziegler yet again who had 124 of 163 balls in play end up being ground balls—just over one percentage point higher than Maness.

Another important thing to note when it comes to sinker ball pitchers is fly ball percentage (FB%). A Maness sinker resulted in a fly ball just 1.22% of the time in 2013. To break it down a different way, he allowed only seven fly balls off his sinker all season. That's pretty amazing. This percentage was the best of the group which means one of two things: hitters could not easily pick up on the downward movement of the pitch or he was locating it well down in the zone. Let's take a look: 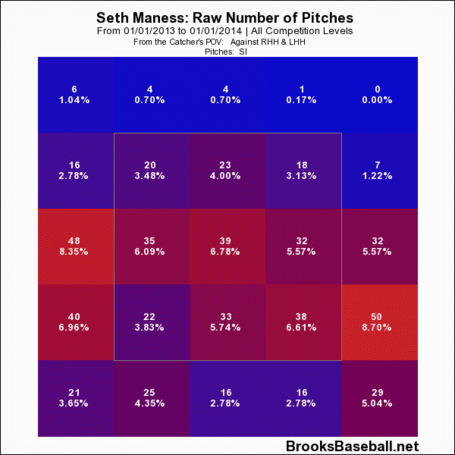 50.4% of his sinkers were in the bottom two rows of the heat map (provided by BrooksBaseball.net). With 32.4% of his sinkers being in the middle row and 17.2% being in the top two rows, it's apparent that Maness has some room for improvement when it comes to locating his sinker in 2014. If he can get 55% (or more) of his sinkers in the bottom two rows, he has the potential of being even more successful than he was in his rookie season. Will he top last year's 16 double plays (which was four more than any other reliever in the MLB)? Probably not, but it is still nice to know that he has room for improvement (better location and mixing of pitches) instead of being at his peak performance already at this stage in his career.

Another thing to keep track of is the development of his changeup over the off-season. It was his second most used pitch in 2013 (19.3%), and it was quite successful. It produced the most swings and misses (28.16% whiffs per swing) of any of his pitches, and it could be a perfect weapon to unleash when hitters are sitting on his sinker. With almost identical vertical release points (5.51 feet for his sinker and 5.53 feet for his changeup), hitters will continue to have a tough time picking up the difference between the two pitches.

With what appears to be a stacked bullpen going into next season, I don't expect Maness to log as many innings as he did in 2013. However, if he is able to successfully fine-tune the location of his sinker and gain more confidence in his changeup, he will be very effective out of the 'pen once again.

Credit to BrooksBaseball and Fangraphs for the data used in this post.