Is the Baseball Prospectus advanced scouting report on Matt Carpenter supported by the infielder's stats?

The folks at Baseball Prospectus ran a wonderful series of advanced scouting reports on players whose teams qualified for October baseball. Tim Steggall wrote the advanced scouting report on St. Louis Cardinals infielder Matt Carpenter. The piece is well worth reading in its entirety. Steggall watched Carpenter over nine September games and came away with some very interesting observations about the Texan. I thought it'd be fun to compare some of Steggall's observations to Carpenter's 2013 stats.

Leadoff hitter that will wear you down, make you show all your pitches, and set you up for the rest of the Cardinals lineup.

Carpenter saw an average of 4.12 pitches per plate appearance (P/PA) in 2013. Carpenter ranked 19th in all of baseball for most P/PA. He's a professional batter, who grinds out PAs.

Steggall on Carpenter vs. LHP:

LHP can get in on Carpenter, can move his feet. 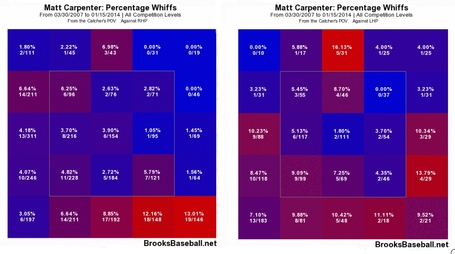 These two strike zone maps are from from the wonderful Brooks Baseball site. The one on the left shows Carpenter's whiff rate against righthanded pitchers. The strike zone map on the right shows his swing-and-miss rate versus lefties. Righties experienced success inducing swinging strikes against Carpenter down and in, off the plate. But southpaws had more luck coming in off the plate, just as Steggall observed.

Pitches out over the plate or not executed will get hit hard, but a LHP has a slightly larger margin of error than a RHP.

For this part of the scouting report, I thought it best to use line drive rate (LD%) as a proxy for hitting "hard." 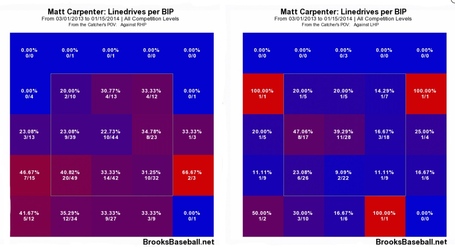 Gap-to-gap power. Not so much over-the-fence power, but consistently hits the ball with authority. With such a short swing and seeing the ball so deep into the zone he sacrifices home run power for consistent contact and consistent barrels; rarely hits the ball in the front zone. Most of his slugging comes in the form of doubles.

The MLB average was has Carpenter led the league with 55 doubles in 2013, setting a new Cardinals franchise record for a lefthanded batter. Carpenter's doubles total not only bested Stan Musial's St. Louis record, it also led MLB last year.