Shelby Miller had a terrific rookie season for the St. Louis Cardinals—finishing third in NL Rookie of the Year voting. He used one pitch more than any other starter in the majors—his four-seam fastball. I take a closer look at it here.

Share All sharing options for: The numbers behind Shelby Miller's four-seam fastball

According to the PITCHf/x Leaderboards on Baseball Prospectus, Shelby Miller threw 2,093 four-seam fastballs over the course of his rookie season—the second most in the majors behind just Chris Tillman, who threw 2,132. This only tells part of the story, though. Of qualified starting pitchers, Miller had the highest four-seam fastball percentage—73.6%—in the major leagues, and it wasn't all that close. Jordan Zimmerman, with the second highest percentage in the majors, threw his fastball 62.1% of the time—11.5% less than Miller.

If Miller is throwing his four-seam fastball 73.6% of the time, a hitter's task list essentially decreases by a third (removing movement from the list) three out of every four pitches. Obviously, not one pitch is ever perfectly straight. I get that. This is shown by the fact that Miller's four-seam fastball averaged 5.53 inches of horizontal movement last season. However, this type of movement is much more predictable for a hitter considering it is consistent movement throughout the flight of the pitch instead of the late, sharp movement seen in two-seam fastballs, cutters, splitters, and even some changeups.

This raises the question: how was Miller so successful if he threw a "straight" fastball three out of every four pitches (73.6%)? In short, Miller throws so many fastballs because it is effective. His fastball ranked 19th in the majors at 9.1 runs above average (according to Fangraphs). I always knew he threw a lot of four-seam fastballs, but I never knew he threw that many of them. It obviously helped that his fastball averaged 94.42 MPH—ninth fastest (of qualified starting pitchers) in the MLB and slightly faster than elite starters such as Max Scherzer (93.96), Justin Verlander (93.92), and Clayton Kershaw (93.31).

Velocity is desired and it is something that cannot be taught, but what about Miller's location? Big league hitters, over the course of a game and especially over the course of a season, can catch up to the fastest of fastballs. A good fastball located on a corner, though? They usually stand no chance. Well, here is a graph charting the location percentages of every four-seam fastball thrown by Miller in 2013: 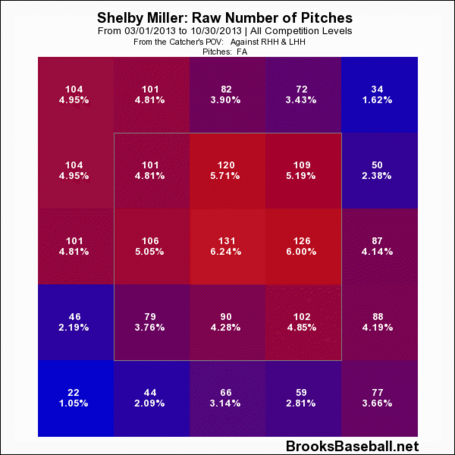 I was surprised to see three of his top five percentages (5.05%, 6.00%, and 6.24%) were in the bright red band right in the middle of the zone—three locations pitchers usually want to avoid. However, this is just a raw data chart, and it doesn't put these numbers into context. A large majority of these pitches could be "get-me-over" fastballs early in the count or after Miller had fallen behind the hitter. It's apparent Miller "lives" up and the zone—41.75% of his fastballs fall into the top two rows of the chart. With a four-seam fastball that averages 94.42 MPH, who can really blame him?

Putting it all together: Miller throws the ninth fastest fastball (on average) in the MLB and a good majority of them are located up in the zone. The combination of the two leads to one thing in particular: whiffs. The whiff percentage per swing against Miller's fastball was sixth in the MLB at 23.73%. Notable pitchers with higher percentages include Zack Greinke (25.32%), Yu Darvish (26.88%), and Madison Bumgarner (27.48%).

There has to be a secret behind Miller's success with his fastball last season. Whatever it is, I sure hope opposing hitters don't pick up on it for many years. Something about his release point makes his fastball deceptive to hitters, and after watching numerous highlights, I cannot even begin to figure it out. If Miller wants lasting success in the majors, one would logically think he needs to incorporate secondary pitches into his repertoire more often, but I'm not going to complain as long as he remains successful. We will see how he approaches hitters in 2014.

Special thanks to the PITCHf/x data obtained from Baseball Prospectus and BrooksBaseball.net for this post.