Will the St. Louis Cardinals Pull a Skip Schumaker with OF Prospect James Ramsey?

Anybody can play second base, so why not Cardinals outfield prospect James Ramsey?

Share All sharing options for: Will the St. Louis Cardinals Pull a Skip Schumaker with OF Prospect James Ramsey?

Baseball's annual amateur draft has become bigger and bigger with each year. A big reason for the increased interest is the increased coverage. Major League Baseball launched the MLB Network and the channel covers the league's amateur draft the same way ESPN does the NFL's.

And so when the St. Louis Cardinals selected Florida State center fielder James Ramsey with the 23rd overall pick of the June 2012 draft, the MLB Network was ready with an on-screen graphic. 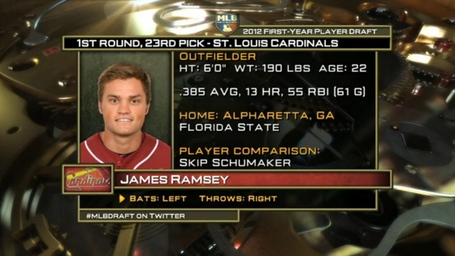 My thought when I saw this on the screen: "THE CARDINALS USED A FIRST ROUND PICK ON A PLAYER WHOSE NO. 1 PLAYER COMPARISON IS SKIP SCHUMAKER!?!?" I quickly went to CollegeSplits.com and discovered that the comparison could not have been more off-base in terms of Ramsey and Schumaker's respective batting profiles. The following chart contains Ramsey's NCAA batting stats with Schumaker's MLB batting stats:

Ramsey is a patient batter who sees a lot of pitches and consequently walks and Ks a lot. Schumaker is the opposite. He strikes out at a rate well below average and draws a walk less often than average. Ramsey also hit for power in college. Schumaker, on the other hand, has never hit for much power.

By offensive skill set, the Ramsey-Schumaker comparison is Exhibit A in support of Rob Neyer's criticism last year of the 2012 MLB Network draft comparisons. So why was Schumaker MLB Network's chosen comparator for Ramsey? There was some question about Ramsey's ability to stick defensively in the outfield, so he may be moved to second base down the line, as Peter Gammons explained on MLB Network right after the pick was announced.

This offseason has seemingly made moving Ramsey to the keystone all the more plausible. In November, general Manager John Mozeliak traded David Freese and Fernando Salas to the Angels for Double-A outfielder Randal Grichuk and major-league center fielder Peter Bourjos, which added two layers of organizational outfield depth. Last week, the Cardinals claimed Rafael Ortega off waivers from the Rangers. At his new Cardinals blog Mad Em-Dashes, Dan Moore looked at how the crowded outfield picture down on the Cardinals' farm might look in terms of assignments:

Grichuk might start in Double-A, just like he did in his injury-shortened 2012. But he theoretically could also start the year off in Triple-A Memphis. Even without Grichuk, the Memphis outfield is looking fairly crowded.

Enter MLB.com's Bernie Pleskoff, a wonderful man to follow on Twitter, with a blog post on the prospect of the Cards moving the outfielder they selected in the first round of the 2012 draft to the keystone because of the organization's outfield glut. St. Louis should consider Ramsey as "an additional infield option," writes Pleskoff, because:

He has enough arm strength, speed and quickness to play second base. His feet are quick enough to provide the range and coordination needed to turn the double play. He has good baseball instincts and appropriate six for an infield role.

Pleskoff, a longtime talent scout, feels that Ramsey has the physical tools to handle the infield. This also separates him from Schumaker. While Schumaker's outfield arm strength was an asset at second base, his lack of quickness and speed gave him the range of a potted plant on the infield.

While the Cardinals have a lot of minor-league outfield talent, their high-minors second base talent is not so impressive. Here's a look at the men who played second base in more than ten games for Springfield or Memphis last season:


*Indicates the player played at multiple levels in 2013. The PA total listed corresponds to the level given on the chart.

The trade of Freese moved Matt Carpenter back to his native third base and opened the door for Kolten Wong to be the primary St. Louis second baseman beginning Opening Day. After Wong, however, the organizational second-base picture is pretty cloudy. There is not a single player who we can say will definitely be the primary Memphis second baseman.

What's more, Ramsey profiles as a better offensive player than anybody on this list not named Kolten. Here are Ramsey's career minor-league stats:

*Ramsey also played one game for Triple-A Memphis in 2013.

If the Cardinals are open to moving Ramsey to second base, 2014 seems like a good year in which to do it.