Is Matt Holliday really the low ball hitter many people say he is? Also, as he ages, will he be able to catch up to pitches up in the zone? I take a look at these two ideas in my latest for VEB.

Matt Holliday has been one of the most consistent hitters in the MLB throughout his 10-year career. This can be seen by his terrific .311/.387/.531 slash line. However, in just five days, he will turn 34 years old—an age where many players begin the twilight of their playing careers. Players begin to experience dreaded age-related decline, and ZiPS took this into account—projecting a line of .277/.360/.468—much less than his career averages.

A large component of the decline in a hitter's prowess at the plate is due to decreased bat speed. Decreased bat speed does a lot of negative things to a hitter, and one prime example is the fact that long fly balls become outs at the warning track instead of round-trippers into the bleachers. However, I will leave this up to John Brenkus of ESPN's Sports Science to discuss at some point.

Instead, I want to address the following comment I received (from "lil_scoot") two days ago: "I always hear that Matt Holliday is a 'low ball hitter'. I have also heard that as he ages he won’t be able to catch up to pitches up in the zone. I think it might be an interesting topic to look in to someday, if someone can find that data."

The second part of her comment is what I am going to explore in terms of decreased bat speed—assuming he has had a decrease in recent years. Decreased bat speed will lead to bigger holes in one's swing—especially on pitches up in the zone.

Let's first take a look at a phrase that gets thrown around a lot—both on Twitter and TV broadcasts. 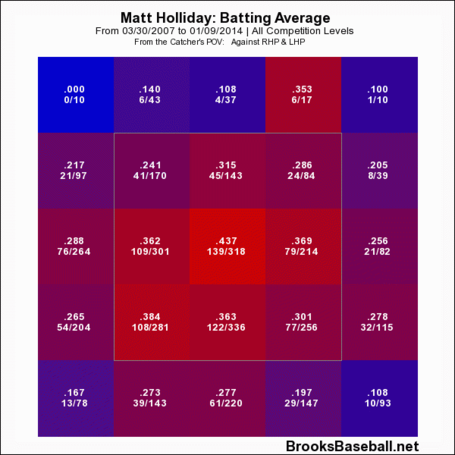 BrooksBaseball has tracked every single at-bat from MLB players since 2007 through the use of the PITCHf/x system. Predictably, Holliday's highest average (.437) comes on pitches right down the middle. His second (.384), fourth (.363), and seventh (.301) highest batting averages come on pitches down and inside the strike zone. I threw out the high and away zone (.353) due to its small sample size (only 17 at-bats).

Based off these numbers, I guess one could say the majority of Holliday's better batting averages are on pitches down in the zone—giving a solid reason to classify him as a "low ball hitter." However, he has good averages on pitches up in the zone as well—excluding up and in where he has a .241 average in 170 at-bats. A big thing going for the "low ball hitter" classification of Holliday would be his averages in the four dark red zones that are low and out of the zone (which read from left to right: .265, .273, .277, and .278). These averages are much better than his averages on pitches up and out of the zone where he has averages ranging from the low .100's to the low .200's.

To conclude the first part of this post, I guess one can classify Holliday as a "low ball hitter." Yet, if a ball is inside the strike zone (which is all we really want a hitter swing at), it doesn't really matter if it's up, down, or in the middle for Holliday (excluding up and in as I already stated). When he does choose to expand his zone, then yes, he is much better on low pitches than high pitches. So next time you hear someone call Holliday a "low ball hitter," don't necessarily throw tomatoes at them, but rather know that it is not as "black and white" as they may make it seem.

Holliday won't be able to catch up to pitches up in the zone as he gets older.

This may be the case, but let's first compare his whiffs per swing in 2007 and 2008 to his whiffs per swing in 2012 and 2013 to see if we can see any big differences five to six years later in his career. For the sake of this post, I set the data so that it only showed fastballs, sinkers, and cutters because even an MLB player with a slow bat should be able to hit a hanging curve ball up in the zone. Plus, the question at hand is if Holliday will be able catch up to pitches up in the zone. This, to me, implies fastballs (and its derivatives). 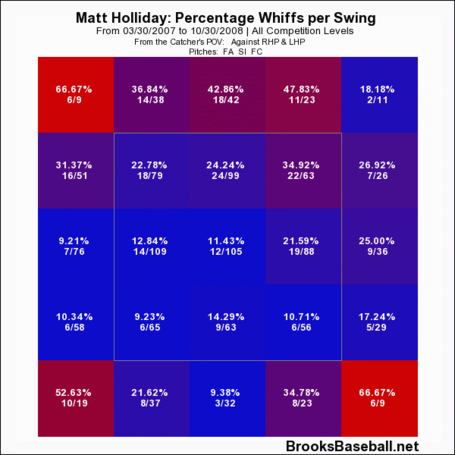 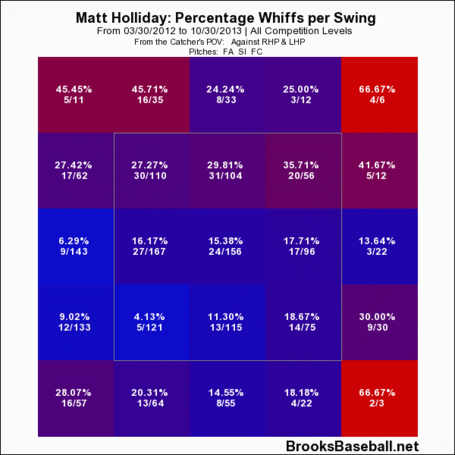 However, the point of using these two graphs was to see if there were any signs of Holliday's bat slowing down—especially on pitches up in the zone. Well, Holliday had just one more whiff in '12/'13 than he did in '07/'08 on pitches up the zone. Amazingly, he took the same number of swings (441) in the two time-frames. The conclusion I draw from this is that his bat has not yet slowed down compared to what it was when he was with the Rockies. Another conclusion could be that his bat speed has indeed slowed down, but he is being more selective—swinging only at pitches he truly feels he can hit. This conclusion is kind of weak, though, because a hitter like Holliday is usually only going to swing the bat when he feels like he can it—unless he is fooled or there are two strikes in the count.

In summation, Holliday can be classified as a "low ball hitter," but it's not as clear-cut as people make it sound. He has a better average when he expands his zone down than when he expands his zone up. Holliday swings and misses at a higher rate on pitches up in the zone, but his percentage is no different than what it was back in 2007 and 2008. His age-related decline may become more of a problem this season. You bet I will be keeping an eye on the numbers in 2014 and beyond.

Until next time...
Joe
Feel free to follow me on Twitter: @stlCupofJoe
As usual, huge thanks goes to BrooksBaseball for providing me with the graphs/charts I used in this post.