Pete Kozma saw a sudden change in outcomes between his epic month or so in 2012 and his dismal 2013. Was that just noise? Was it something real?

Share All sharing options for: Pete Kozma: A Tale of Two Hitters

Pete Kozma's 2012 is surely one of the more fascinating blips in baseball performance.

A perpetual offensive underachiever in the minors, little if anything was expected of him when he took over in the wake of Rafael Furcal's injury. He then proceeded to massacre baseballs in a way no one could have predicted.

The easy, and probably in many ways most appropriate, way to deal with Kozma's 2012 is to dismiss it as a statistical anomaly and move on to the next baseball puzzle. I tinkered around on Brooks Baseball a bit to see what, if anything, might suggest something other than Ordinary Baseball Weirdness (OBW) behind his numbers.

I didn't see a lot in the pitch selection or approach against him that changed. The preferred way of pitching to him has always been low and away; he's hideously bad at hitting balls low and away. Even in 2012, he really struggled to get his bat around and do anything useful with it.

The first time I saw anything that gave me some pause was when I started to look at before-and-after spray charts. 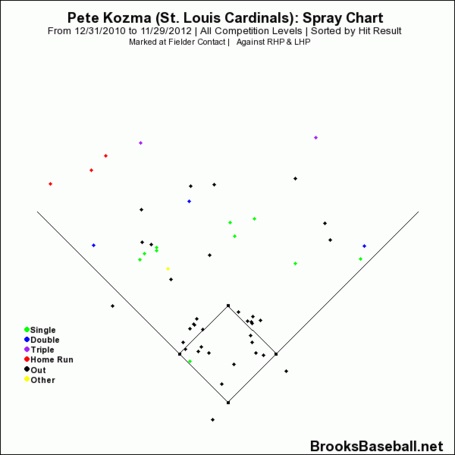 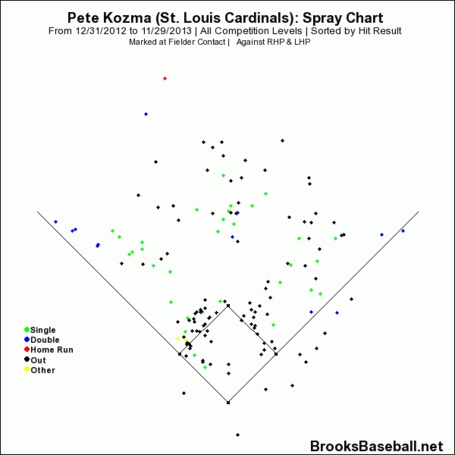 Take a look at the number of outs that Kozma has hit to right field in 2013. The distribution of outs, or really, just balls going out to RF is really striking to me. It's not what you would expect from a right handed hitter at all. By contrast, take a look at his 2012 numbers and the number of hits - especially his 3 deep home runs - going to left field. In 2012, the number of pulled balls to the outfield seems to run about 2:1 against balls hit to the opposite field; in 2013, the reverse is true.

Even in his otherwise feckless 2013 season, he hits extremely well as a pull hitter, especially if he can get the ball out of the infield. He has a .351 batting average in 2013 as a pull hitter; you wouldn't think Pete Kozma was a .351 hitter in 2013 doing anything.

Now, what I have some difficulty parsing is whether this is just BABIP weirdness expressed graphically. Kozma is not a particularly pull happy hitter generally. His pull/center/opposite numbers seem more or less consistent across the two seasons.

There are some differences across the two seasons, although the sample size should give us some caution. Here are his LD/GB/FB numbers in 2013, as a pull hitter: 25%/60%/15%; in 2012, 20%/60%/20%. That actually suggests the little difference in his hitting. His groundball numbers stayed the same as a pull hitter. I don't put much reliance on minor differences between LD and FB numbers, since they can easily be classified in different ways.

So, maybe much of what we're seeing in the charts above is a LOT of shallow pop flies to RF in 2013. About twice as many, based on what the batted ball data tell us. And that matches the spray chart interestingly; there are a lot of black dots in very shallow RF, probably from very high popups. Nobody is getting thrown out at first on a dribbler that makes it to RF, so I somehow doubt that is just fielding differences.

Maybe the only weirdness in the above charts is just ordinary variation in batted balls and the very small 2012 sample size we're addressing.

But maybe (MAYBE) Kozma was more successful in 2012 at getting his bat around and driving balls to left field. Maybe his 2012 stance or approach was helping him get around and make more solid contact, instead of lofting balls to shallow right field like he's done this year.

I don't really have an answer here. I don't anticipate that we will see much of anything from Kozma in the future. I just put these differences forward for discussion and observation.