Siegrist has proven to be dominant in the early part of 2013. It's a valid question whether that will continue but, until it stops, here's a look at how he does it.

After Friday's game, Kevin Siegrist has an ERA over 0.00. After facing over 40 batters across 12 innings, Starlin Castro connected to hit a home run off the left hander. Siegrist's emergence as more than just a LOOGy has been impressive and somewhat unexpected. The degree of his dominance has been captivating.

Siegrist was a flier pick (41st round) in the 2008 draft. He made stops in short season clubs and then incrementally climbed the ladder from Quad Cities to Memphis. That journey began as a starter for the most part. From 2008 through 2012, Siegrist appeared in 75 games, of which 54 he started. He posted mediocre strikeout rates and had control issues. Those first five years were almost entirely unremarkable. It wasn't until 2013 that he as converted to full time relief in Springfield.

In 20 innings of work, Siegrist struck out 35 and walked 7. Suddenly, Siegrist was a dominant reliever. A brief stint in Memphis ensued -- again with more than a strikeout an inning -- before he found himself called up to the big leagues. Marc Rzepczynski was firmly entrenched in his own personal implosion leaving the bullpen with just an aging Randy Choate to retire left handers. Siegrist rose to the challenge.

On June 6th, Siegrist was called in from the pen during a blowout (12-5) game against the Arizona Diamondbacks. Siegrist allowed an inherited runner to score off a Gerardo Parra single. Then he struck out Didi Gregorious looking and Eric Hinske swinging. Coming back out for the 8th inning, Siegrist induced a pop-up and then struck out 2 more batters. 6 batters faced. 1 hit. 1 pop-up. 4 strikeouts.

Siegrist features a handful of pitches (fastball, two seamer, cutter, curveball, changeup) but mostly works from his curveball and his fastball. He clocks in a 94 mph with his fastball, which is a bit higher than his days as a starter in the minors, not unexpectedly. Siegrist is getting lots of called strikes at the moment with a swing rate at balls in the zone well below average. He's also generating swinging strikes at an above average rate. Hitters don't read his stuff well, don't make good contact when they do get a hold of it and miss against Siegrist more often than an average pitcher. That's a pretty good combination for success.

Given that mix of pitches, it's unsurprising -- but encouraging -- to see that Siegrist primarily locates his pitches down and away. 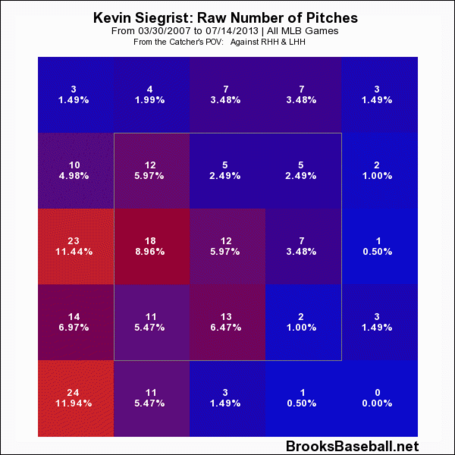 What Siegrist is apt to do for the strikeout is come over the top with his fastball. That's something you can do when your fastball sits at 94 and has touched 97. 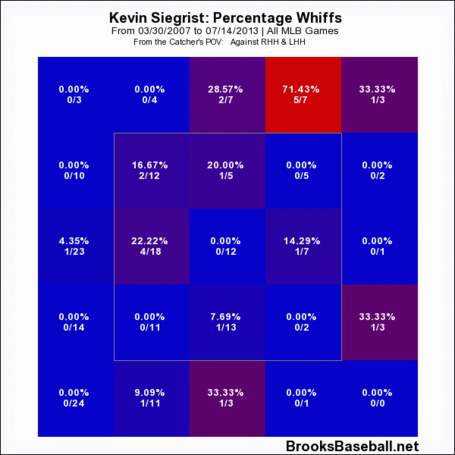 Siegrist hasn't shown any appreciable split in the majors though parsing a sample size of 12 innings is specious. In the minors this season, he's shown the typical splits with more success against same handed hitters mainly in the form of a higher strikeout rate.

It's worth placing caveats on Siegrist's projection beyond this point. Prior to 2013, there was little evidence that he would be a dominant reliever. Prior to 2013, his fastball was not considered to have elite velocity for a left hander. 2013 only as about 40 innings worth of data spread across 3 levels of competition. These are all reasons to be very cautious in assuming that the current performance appropriately reflects his true talent level.

Even if it doesn't, Siegrist's first 12 innings in the majors have been damn fun to watch. The St. Louis Cardinals continue to display a new method for bullpen building. Minor league starters in Kevin Siegrist, Seth Maness, Trevor Rosenthal and Carlos Martinez lead the way augmented by veteran relievers Randy Choate and Edward Mujica. Keith Butler is the only homegrown reliever not to be a former minor league starter currently in the bullpen.

The Cardinals have had some trouble finding steady starters but, despite losing Mitchell Boggs and Marc Rzepczynski to general ineffectiveness, the club has shown that it can quickly repair a bullpen during the season. Kevin Siegrist has been a major part of that recent patch job. In some ways, the patches have proven better than the originals.