The Cardinals select one of the top prep shortstops with their second round pick.

Share All sharing options for: Round 2, Pick 57: Oscar Mercado, SS 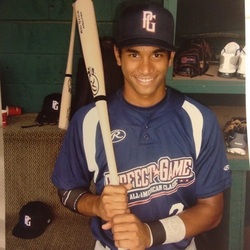 Shortstops who can stay at the position are hard to come by, so when one does, especially one with some potential with the bat, they tend to get a lot of attention. Case in point: No. 1 overall pick Carlos Correa in 2012 and first-rounder Francisco Lindor the year prior. In 2013, the honor of being the top high school shortstop will go to Mercado. He has very good actions at shortstop, with no question about his ability to defend at the premium spot. He'll need to add some strength, but he also showed some offensive ability over the summer, standing out at the East Coast Pro Showcase. His potential and his glove work will undoubtedly put him high up on Draft boards in June.

Smooth actions in the field and one of the few true shortstop profiles in the draft class. Mercado projects to stay at short, but has shuffled around some this summer to accommodate the showcase format and has looked strong across the three-, four- and five-spots. He needs to add strength, but currently shows an ability to produce good backspin in batting practice and maintains a solid swing plane in-game that keeps the barrel in the zone. He’s an excellent baserunner whose instincts and aggression allow his average speed to play way up.

There's more at the link but this strikes me as the consensus opinion on Mercado. He's got a strong defensive reputation, good instincts and questionable results at the plate. BP followed up with similar thoughts in May of 2013.

[...] At his best he shows a mechanically sound swing and bat control and gap power. Mercado likely will never hit for power, but he does play the small game well. He's an average runner with outstanding instincts on the bases, as well as in the field. He's a smooth, fluid defender whose glove will give him a chance to survive as a pro while his bat develops and strength catches up. [...]

Baseball America also had Mercado as one of the top high school defensive players coming into the 2013 draft.

If you here questions regarding Mercado's drive, they probably stem from this Keith Law review:

Shortstop Oscar Mercado from Gaither HS in Tampa was similarly disappointing when I saw him over the weekend, playing a low-energy game on Saturday that featured two throwing errors to first on routine ground balls and a sloppy uppercut swing that helped him work his way out of hitters' counts in two of his trips to the plate.

Mercado's reputation in this draft is that he's one of the only shortstops who is a lock to stay there, but he didn't show the hands or the arm for that on Saturday and he certainly didn't show the effort level, even in pregame warm-ups. He looked better last summer, but another scout who's seen Mercado this spring said what I saw was representative of his showing so far this spring.

Jason Churchill had Mercado as the top shortstop coming out of high school.

At the plate, his lack of strength is noticeable when compared to guys like Jan Hernandez but he won't get the bat knocked out of his hands. His swing is efficient and he makes solid contact. He has quick hands and shouldn't have a hard time catching up to velocity. With added strength and reps he could grow into an average or better hitter. Power will never be a strong suit but he should be able to hit some extra base hits. He could be a .280/.330/.400 guy with above average defense.

Here's a profile about Mercado's childhood and upbringing. Not a lot of substance from a baseball perspective but an interesting read.