The St. Louis offense punctuated the Cardinals' four-game sweep of the Brewers at Miller Park by plating 10 runs behind Jaime Garcia, who allowed a single run to Milwaukee over eight innings of work.

A day after the Brewers knocked St. Louis ace Adam Wainwright around with 11 hits and 5 runs, lefty Jaime Garcia shut the Milwaukee lineup down. The Cardinals offense backed up Sunday's starter by continuing their brutal assault on the Brewers pitching staff for a fourth consecutive game. By the time 54 outs were recorded at Miller Park, the Redbirds were 10-1 victors.

After the Milwaukee team moved to St. Louis and became the Browns, the Milwaukee Brewers were founded as a minor-league club in the minor-league American Association. In 1913, the Brewers won the first of back-to-back American Association championships. On Sunday, the clubs commemorated the 100th anniversary of this championship season by wearing jerseys that were kind of like the ones the minor-league Brewers and major-league Cardinals wore that year. The Cardinals sported caps with a stylized "STL" on them even though the 1913 Cardinals didn't. Fans can buy the cap that no St. Louis Cardinals player ever wore until May 5, 2013 here for $34.99. 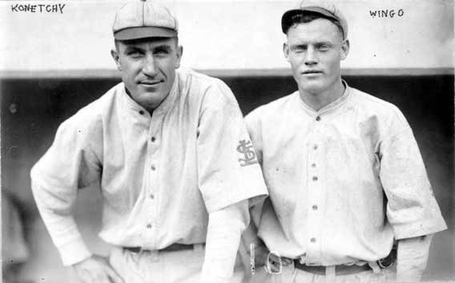 A photograph of the St. Louis Cardinals 1913 uniforms via www.retrosnapshots.com

Garcia confounded the Brewers for eight innings in his road gray 1913 fauxback uniform. The lefty entered the game with an MLB-leading 68.2% groundball rate that was 8 percentage points ahead of his teammate Jake Westbrook, who was second on the list. Garcia has not had a game this season in which less than half of the balls opponents put in play were grounders. This pattern held true on Sunday even though Garcia allowed his lowest groundball rate in a start at 51.9%.

Garcia allowed eight hits and issued just one walk over eights innings. He struck out three Brewers, as well. The strong start lowered Garcia's 2013 ERA to 2.25 and his FIP to 3.07. However, his xFIP rose to 3.42. The seven Brewers Garcia left stranded raised his LOB% for the year from 74.7% to 77.1%.

The Cardinals put together a rally in the second inning. After David Freese led off by striking out, Daniel Descalso worked a walk. Pete Kozma then singled. Garcia struck out on a foul bunt attempt. As they've done so often this year, the Cards struck with two outs. Jon Jay was hit by a pitch to load the bases. Then Shane Robinson and Matt Holliday drew back-to-back bases-loaded walks that plated two. Mr. RBI Allen Craig cleared the bases by lacing a liner that landed just on the fair side of the left field foul line and then shot into the left-field corner. Yadier Molina gave the inning a serious tone by driving in Craig with a grounder up the middle to give the Cards a 6-0 lead. Freese ended the inning with a line out to Ryan Braun in left field, giving him the dubious distinction of having bookended the inning with outs.

Robinson led off the fourth with a single and Holliday then assassinated another member of the Rawlings family. The Hollidinger shot out of the yard in typical laser-like fashion, clearing the home team's bullpen and landing on the pavilion. With John Rooney calling play-by-play, Mike Shannon was free to chuckle heartily while oohing at the massive blast. The call was perhaps the season's best to date.

The Brewers touched Garcia for a run in the fifth. Carlos Gomez led off the inning with a double. Yuniesky Betancourt flew out to Robinson; Gomez tagged up and advanced to third. With one out, Alfred Figaro BABIP'd a weak bouncer that a charging Daniel Descalso could only glove to Craig at first. Gomez scored on the play, giving Figaro his first career RBI on a grounder that didn't make it to the cut of the infield dirt. Next up was Norichika Aoki who flew out to Robinson for the inning's second out. Jean Segura rapped an infield single that bounced off Garcia and to Descalso. Braun notched the Brewers' third infield single of the inning. With the bases loaded, Garcia struck out Aramis Ramirez with a slider in the dirt that Molina blocked.

The Cardinals answered in the top of the sixth. With two outs, Holliday singled. Then Craig lifted a fliner down the right-field line that Aoki played horribly. Aoki's strange leap allowed the ball to bounce past him and into the right-field corner. Holliday scored and Craig reached third. Because Aoki didn't come into contact with the batted ball, the hit was scored a triple, which was Craig's first three-bagger of the season.

In the top of the eighth, the Cardinals further padded their lead. Jay singled. Then Robinson and Jermaine Curtis, who pinch-hit for Holliday, walked. With the sacks packed, Craig flew out to Aoki in right. Then manager Mike Matheny pinch-hit for Molina with Tony Cruz. The seldom-used backup catcher singled on a grounder to right that pushed Jay across home for the Redbirds' tenth run.

Carlos Martinez came on in relief of Garcia. The rookie notched his first MLB strikeout on a 99-mph fastball that Gomez ticked with the bat but Cruz caught for the third strike. Hopefully we will see many more K's from the young man with the "Tsunami" tattoo.

The four-game sweep of Milwaukee is the first time the Cards have ever swept the Brewers in a four-game series. Today's win gives St. Louis a 20-11 record on the season. The Cardinals' .645 winning percentage is the best in the National League and ties them with the Red Sox and Rangers for the best winning percentage in all of baseball.

The Cardinals have an off-day tomorrow in Chicago. In Tuesday's Game 1 of the season and two-game series, Lance Lynn is slated to start against Travis Wood. In a curious scheduling quirk, the Cardinals will have as many days with games against the Cubs this week as they do off-days.