With the injury to John Gast, the Triple-A replacement for the injured Jake Westbrook, the Cardinals have called up Michael Blazek to bolster the bullpen.

St. Louis Cardinals rookie southpaw starter John Gast lasted just two innings in Los Angeles on Saturday before he left the game with a shoulder injury that has since landed him on the 15-day disabled list. Due to the six innings the Redbird relievers tossed after Gast's exit, the Cardinals promoted Michael Blazek from Double-A Springfield to bolster the pitching staff.

The Cardinals selected Blazek in the 35th round with the 1,068th pick of the 2007 amateur draft. Then 18 years old, Blazek had recently graduated from Arbor View High School in Las Vegas, Nevada. St. Louis assigned Blazek to the Florida Gulf Coast League in 2007, where he got off to a good start to his professional career.

Blazek spent the 2008 campaign with Johnson City in the Appalachian League where his ERA was quite a bit worse than his FIP. In 2009, the Cardinals sent to Batavia, where he pitched in the New York-Penn League. In 2010, he spent most of the season in the Quad Cities where he worked as part of the franchise's piggyback starter system. This made his assignment to start 2011 as a starter in Double-A Springfield a bit of a surprise to Jeff at Future Redbirds. Blazek's 2011 was underwhelming and his 2012 wasn't head-turning.

After being groomed as a starter throughout much of his ascent through the Cardinals system, Blazek has been deployed in relief this season as the Springfield closer. The righty has seen his strikeout rate shoot up, which has allowed him to enjoy success--that, and not allowing a homer yet. It will be interesting to see which of his five pitches he uses in relief for the Cardinals, should he get the chance.

The Cardinals have demoted Carlos Martinez to Triple-A Memphis and recalled portly reliever Victor Marte. It is likely that Marte will battle Ty Wigginton for post-game buffet prominence while surrendering runs at a healthy clip when manager Mike Matheny calls upon him in the later innings (and inserts as part of a double-switch Wigginton into the game while removing David Freese, Carlos Beltran, Matt Holliday, or Allen Craig). 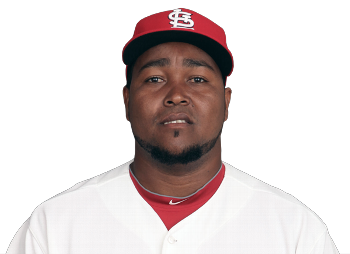