One Reliever in a Bullpen of Suck

What happened to Joe Kelly?

Share All sharing options for: One Reliever in a Bullpen of Suck

Last night, Jake Westbrook needed 91 pitches to get through the first 6 innings.

To complete the final 3 innings, the bullpen needed 87 pitches.

That is not a recipe that lends itself to success. This season has exposed the entire bullpen in early going. Mitchell Boggs and Joe Kelly have both been egregiously bad. Trevor Rosenthal has shown a penchant for home runs. Arguably, control pitchers Fernando Salas and Edward Mujica have been the most reliable. Despite their qualified success, the bullpen innings have continued to go to Rosenthal and Boggs disproportionately.

It's important not to react too strongly to early season samples but clearly something is wrong.

If there's a player in the bullpen that I've been most disappointed by, it's got to be Joe Kelly. Kelly was an underrated talent in the minors with a heavy sinking fastball and plenty of velocity. Overshadowed by guys like Shelby Miller, Rosenthal and Carlos Martinez, it was Kelly who came up in 2012 when a rotation position opened.

Kelly tossed 107 innings across 16 starts and 8 relief appearances. His command was spotty at times but he generated lots of ground balls and struck out enough batters to get by. Kelly's 4.00 FIP from 2012 was a little below average but certainly above replacement level.

Flash forward to 2013 and Kelly is sporting a 6.23 FIP, which is, I suppose, better than his 8.31 ERA. Historically, pitchers get better when they move to the pen. Their velocity increases, they rarely face batters multiple times and they can receive better matchups to suit their skillset. A move like this should make a player better not worse.

There's a couple oddities to Kelly's line. First of all, his walk rate has actually dropped precipitously in the early going. Kelly's actually throwing more first pitch strikes and generating more swinging strikes than he did in 2012. The failure of Kelly's early going has been predicated on one specific thing: home runs. He's allowed 3 in 8.2 innings pitched.

Pitches getting hit into the air is the antithesis of what made Kelly a success in the minors. It's clearly not working out for him in the majors. That's a results problem though. It's also likely to even out over time -- a 27% HR/FB rate is not going to happen over the course of a season. (Tip of the cap to survivor bias.)

What's causing the results? Hard to say but there looks to be a noticeable shift in Kelly's release point in 2013. Take a look at this comparison of Kelly's horizontal release point from 2012 to 2013 via Brooks Baseball. 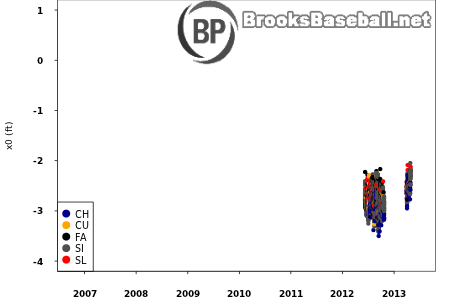 It looks like Kelly has moved significantly. Instead of plotting all the data points, what happens when you average by pitch type? Well, it becomes even more pronounced. 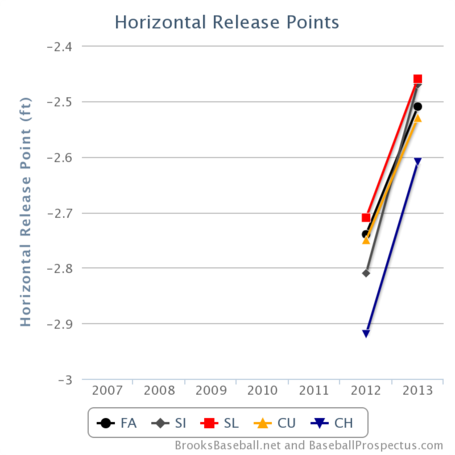 Kelly's shifted about 4 inches. When we're averaging like this, we should avoid most of the concerns about pitch f/x data integrity and park specific bias. This doesn't look like a mirage of uncalibrated input data. This looks like a real change. Kelly also has some deviation on his vertical release. 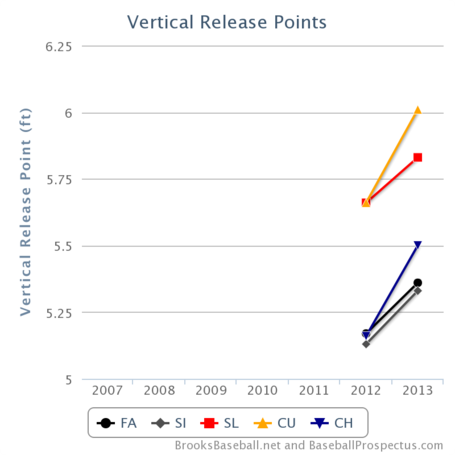 His vertical release point is anywhere from 3-4 inches higher depending on what pitch you're looking at.

It's hard to say whether the changes measured in pitch f/x are intentional or out of whack mechanics in the early goings of the season. It's also important not to read too much into a causation effect. Kelly's release point has changed. Kelly has pitched worse this year. That does not mean that Kelly's change in release point is making him pitch worse.

It's still not clear why Kelly is pitching worse either. I'd offer a couple of options. 1) This is purely a case of bad luck. When looking at such a small sample size, the three home runs are just three pitches that happened to get blasted. 2) Kelly is having issues with his command. We've seen that his control his better -- he's walking fewer batters than in 2012 -- but being in the strikezone is only half the game. If Kelly is putting too many pitches in the heart of the strikezone, that could be problematic. 3) He's tipping his pitches. This is the one I worry about the most and the one I feel least equipped to analyze. With the change in release points, Kelly now has some daylight between his various pitches based on the chart above. Is that enough for batters to sit on his fastball (all three home runs were hit on fastballs) and lay off the breaking pitches?

In the grand scheme of things, Kelly isn't the reason why the Cardinals 2013 bullpen has been atrocious. That's required a group effort. It's frustrating to watch a prospect who was surprisingly good in the rotation last season in the face of skepticism regress in what should be a more conducive environment to performing well.