Garcia WIGs Out in Philly, Cards Thumped 8-2 in Rain-Shortened Loss

Mike Matheny started Ty Wigginton at third base on Friday night with groundballer Jaime Garcia starting. The results were as predictable as they were sad.

Share All sharing options for: Garcia WIGs Out in Philly, Cards Thumped 8-2 in Rain-Shortened Loss

Friday night's game between the St. Louis Cardinals and Philadelphia Phillies was over long before the rain drops began falling on Citizens Bank Park.

After 1-2-3 top of the first for Roy Hallday, Cardinals lefthander Jaime Garcia ran into trouble after retiring the first two batters sent to the plate by the host Phillies. Garcia walked Chase Utley. A ten-pitch at-bat for Michael Young ended in a single. Next, John Mayberry rapped a double, making the score 1-0.

Then Garcia and the Cardinals were Wigg'd.

Garcia did what Garcia so often does. The southpaw induced a groundball to third base, which was being manned by Ty Wigginton on this night for some odd reason. Wigginton somehow managed to bend over and field the ball but then he showed why he is one of the worst fielders and players in all of Major League Baseball. Wigginton threw the ball away. Wigginton's E-5 turned what should have been the third out of the inning turned into the second and third runs for the Phils.

Garcia followed up the Wigginton error by surrendering a triple to Ben Revere that made it 4-0. After that, Humberto Quintero doubled. Roy Halladay was called out on strikes and the inning ended with all of the Phillies' starting nine having dug in for a plate appearance. The score was 5-0 after one inning. For all intents and purposes, the game was over.

Carlos Beltran swung the bat well, belting two dingers on the night, but his a homer. Matt Holliday did the same, but the two solo home runs were the Redbirds' only hits and runs on the evening. Not even heavy rain could save the Cardinals on this night. By the time the showers came, the game was already official. The Phillies won the game after 6 1/3 innings by the score of 8-2 thanks to Garcia's poor effort, which was aided and abetted by WIG, whose specter still haunts the tarp-covered field in the City of Brotherly Love. 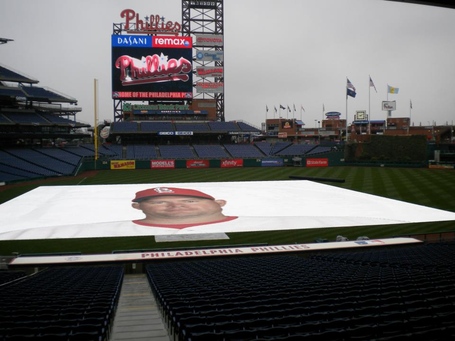