Friday night is the reward for cultivating a prospect over years of minor league training.

Watching Shelby Miller dominate the Milwaukee Brewers for 7 innings on Friday night was fantastic. Doing so at the ballpark was bone chillingly cold. (No seriously, St. Louis was like ice on Friday night.)

Miller threw 113 pitches over 7 innings. He struck out 8, walked 0, hit one batter and allowed a single. He was impressive.

Milwaukee's lineup is not overpowering. They do feature Yuniesky Betancourt for three at bats, after all. Anytime a pitcher dismantles a lineup so effectively, it's worth considering what happened.

First of all, Miller does not throw as hard as he was often reported to throw in the minors. He can dial it up past 95 but routinely sits in the 92-94mph range. There's nothing wrong with that and it was clearly effective on Friday night. 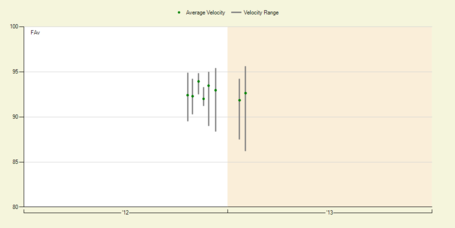 Of the 113 pitches Miller threw, 84 were fastballs. Miller was often criticized in the minors for being overly reliant on the fastball but Friday night it worked. There's some variations to his fastball captured in this spread with a max velocity of 96.6 mph and some fastballs below 92.

That said, the secondary pitch that Miller relied on was clearly his curveball. With the exception of one changeup, Miller worked exclusively as a fastball-curveball pitcher on Friday night. He had 14 swinging strikes in total with 5 coming on the curveball. If there's a succinct argument to be made for his success, it probably revolved around consistently mixing in the curveball. 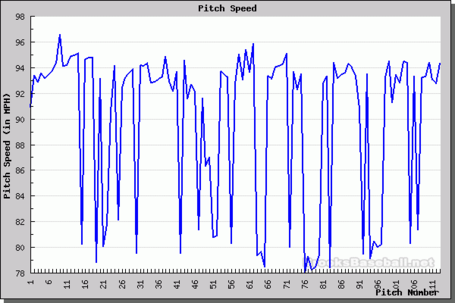 One other curious item is that Miller actually got significantly more efficient as the game went along. After needing 62 pitches to make it through the first three innings, he needed just 51 to go through the next four. And while it feels like a no-brainer in retrospect, kudos to Mike Matheny for sending Shelby Miller back out for the 7th. Miller was at 99 pitches despite a quick 6th inning. Given the kid gloves we've seen applied in the past, that was a pleasant surprise for me.

There are still aspects to Miller's game that need refinement and that changeup is something to keep an eye on but this is more along the lines of the Shelby Miller we all hoped for. This was the Shelby Miller that struck out 70 in his last 10 games at Memphis last year. This is the player that has the potential to be a dominant ace with a plus fastball and an out pitch in his curveball.

There's a lot of valid concern about the Cardinals rotation this season with recently injured players like Adam Wainwright and Jaime Garcia being asked to lead the rotation. But, outside of Westbrook, the Cardinals have put players into the rotation that can do what Miller did on any given night. It's not just the dominance but it's the strikeouts. Without disparaging Westbrook, the other four starters all have swing and miss stuff that can set them apart from the more recent pitch-to-contact necessity pitchers that we've seen in recent iterations.