After Wandy Rodriguez shut them out Saturday—Yadier Molina had the day off—Puerto Rico's path to the 2013 World Baseball Classic championship runs through two-time champs Team Japan, as the semifinals begin Sunday at 8 PM CDT in San Francisco. Both of the St. Louis Cardinals' remaining WBC participants, Molina and Carlos Beltran, figure to be in the starting lineup. 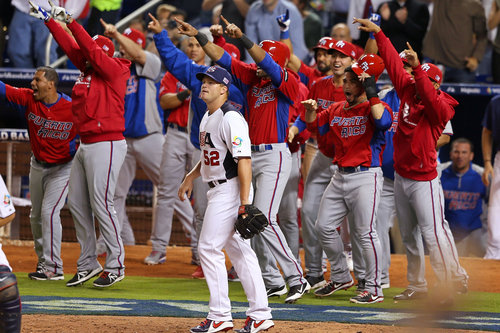 For live news and updates on the 2013 World Baseball Classic, click through to SB Nation's WBC hub.

Japan began the WBC looking weaker than they have in each of the last two tournaments, with none of Major League Baseball's Japanese players agreeing to participate. But after losing to Cuba in Round 1 (and not exactly dominating Brazil and China) they outscored the Netherlands 26-10 in two Round 2 games and slipped by Taiwan to advance to the semis. Not known for their slugging, Japan is currently second in the WBC behind Cuba in home runs and slugging percentage.

You'll have to have MLB Network or ESPN Deportes, as usual. Players worth watching for Japan include Shinnosuke Abe, captain of the Yomiuri Giants and a catcher who hit .340/.429/.565 last year in a Pacific League that hit .244/.310/.338, and starter Kenta Maeda, who's thrown 10 scoreless innings with 15 strikeouts and one walk in two WBC starts so far. 25 next month, he led the Central League with an ERA of 1.53 in 206 innings last year.

Or you can just watch all of them and then compulsively beg for the Cardinals to sign them, like I'll be doing.