In 2012, 19-year-old Oscar Taveras received a non-roster invite to the St. Louis Cardinals major league spring training camp. Taveras had turned heads, including azruavatar and mine, in the Quad Cities. But, the kid who won Midwest League batting crown with a .386 average was still lesser known.

Wearing No. 91, Taveras made it into a game late in spring training. Dan McLaughlin and Ricky Horton had no idea who he was. Neither did the FOX Sports Midwest production crew. The broadcast famously identified him as "Minor League Guy" as Horton joked that "'Joe Minor League Guy, No. 91, had a great year last year." The inning ended with McLaughlin stating, "We head to the bottom of the ninth with Minor League Guy stranded at third," as Horton giggled. The YouTube snippet of the broadcast is surreal viewing nowadays, given how far Taveras' star has rocketed upwards. 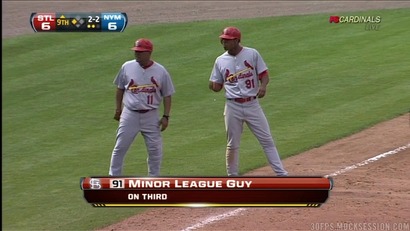 Taveras was sent to Double-A Springfield at the start of last season. During the Midsummer Classic, he participated in the Future Stars Game. Bernie Pleskoff of MLB.com describes Taveras' batting practice session before the game:

Taveras takes batting practice very seriously. In fact, at the Futures Game, Taveras' batting practice was a "must-see" event, one I won't soon forget. One drive went over the batter's eye in center field. Another landed in the fountain. People stopped in their tracks to watch. His power display was beyond my expectations.

In 124 games at Springfield, he hit for a .321 average, .380 on-base percentage, and .572 slugging percentage. His batting line also boasted 23 homers, 37 doubles, and 7 triples that produced a .252 Isolated Power (ISO). According to Statcorner.com, Taveras' .416 wOBA was good for a 120 wOBA+. It's no wonder that Taveras was named the Texas League Player of the Year and Cardinals Minor League Player of the Year.

Taveras' superb season as 19/20 year old in Double-A gave professional prospect evaluators reason to take notice. Kevin Goldstein and Jason Parks both worked for Baseball Prospectus last summer and were amongst the most prolific Twitter users in terms of sharing their assessments of prospects. During the 2012 season, they did so regarding Taveras.

Parks sent out some of the more amusing tweets on Taveras.

Do you like Bacon? He's bacon. RT @thebighurt23 @professorparks Could you give me a scouting report on Oscar Taveras?

Most people have stupid ringtones. My ringtone is the recorded sound of Oscar Taveras murdering a village full of people with his swing.

Before Kevin Goldstein left Baseball Prospectus for the Houston Astros front office, he tweeted his opinion on Taveras.

If I re-did a prospect ranking right now, I'd have Oscar Taveras as the best offensive prospect in the game.

I didn't say all around, just pure offensive prospect. I don't think there's a better hitting prospect in the minors than Taveras.

The Hot Stove evaluations have been no less flattering for Taveras. The offseason rankings from prospect evaluators have been glowing. A consensus seems to be growing that ranks Taveras as one of the top 5 prospects in the game today.

Most recently, Parks wrote up the top 10 Cardinals prospects at Baseball Prospectus. In naming Taveras the Cardinals' top prospect, Parks shares many insights and fun quotes such as "one pro scouting director said Taveras' biggest weakness is that he doesn't play for the scouting director's team." One quote in particular from Parks' piece stuck out to me: "high floor/cathedral ceiling." The notion of Taveras having a "cathedral ceiling" immediately brought to mind bottle caps.

Stan Musial grew up in Donora, Pennsylvania, a town of about 7,500. It was a steel-mill town and Musial's father made his living in the mills. Musial and his friends didn't have baseball's growing up so Mrs. Musial made them. She wound a ball of yard and used black tape for the stitching. However, Musial wasn't always fortunate enough to play with a homemade baseball while growing up. As Musial discussed during a 2002 Hall-of-Fame interview, he and his brother would hit bottle caps.

We had some bottle caps and broomsticks. Of course, my brother would pitch, ya know. With a bottle cap, you can make it move and curve and swing around and, of course, trying to hit that bottle cap is quite a feat.

Roberto Clemente hailed from Carolina, Puerto Rico, just east of the capital San Juan. Like Musial, Clemente and his brothers did not have the opportunity to play with a real baseball. Like Musial and his brother, the Clemente brothers used bottle caps. As H.R. 4831, which renamed a Chicago post office for Clemente, recounts:

Cane sugar workers in Puerto Rico lived a very humble life and a life of poverty. Roberto began playing baseball like many of his contemporaries did, doing batting practice with a broken broomstick hitting bottle caps. He said that, after swinging hundreds of times at bottle caps, a baseball looked as big as a coconut.

Henry Aaron was born in Mobile, Alabama and grew up in a poor part of the greater metro area. The excellent SABR biography on Aaron by Bill Johnson explains:

Henry was born, and the Aarons lived, in a poorer neighborhood of Mobile called "Down the Bay," but he spent most of his formative years in the nearby district of Toulminville. The Aaron family lived on the edge of poverty, in part due to the general economic conditions of the Great Depression, so every member of the family worked to contribute. Young Henry picked cotton, among other odd jobs, and while his parents could not afford proper baseball equipment for recreation, Aaron was able to practice in endless sandlot games and by hitting bottle caps with ordinary broom handles and sticks.

As a kid, Taveras would play a game that involved taking the cap off water jugs and trying to hit it when it was pitched like a tightly spinning and veering Frisbee. His dad, who played pro ball, could pitch corn kernels to him. They fastened a tire to a fench. and Taveras whaled away on it to hone and strengthen his swing. Sometimes he'd use a tee, moving the location of the ball around to improve his plate coverage.

The title of Parks' recurring Baseball Prospectus column is "Prospects Will Break Your Heart." Truer words have never been spoken. The first prospect I seriously tracked through the minors was Rick Ankiel. No prospect's fortunes have been as heart-wrending. Ankiel the Pitcher stands as a powerful anecdotal antidote to expectations for Taveras running wild. Nonetheless, I envision the vaulted Santa Taveras cathedral ceiling in my head, buttressed by All-Star appearances, featuring an MVP flèche, and a chevet of batting titles. All because of bottle caps. 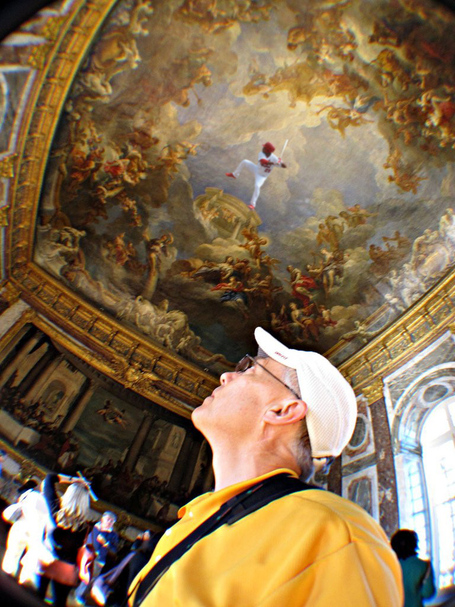