With all the talk about the Cardinals' starting rotation, few are paying attention to the team's relief corps.

Share All sharing options for: Using Reliever Projections In An Attempt To Answer The St. Louis Cardinals' Biggest Question Mark

In 2012 the Cardinals won 88 games and the second Wild Card berth on the strength of their offense and starting pitching. The Cardinals placed second in the National League in runs scored despite playing their home games in pitcher-friendly Busch Stadium. Their starters finished fourth in the NL in innings, third in ERA, and second in FIP. Last year's weakest link for St. Louis was relief pitching. The bullpenners ranked ninth in the NL with a 3.90 ERA and eleventh with a 3.92 FIP. Today I thought we'd see if there exists reason for optimism regarding the relief corps as the 2013 season ramps up.

As a group, the Cardinals were worse than average in strikeouts per nine innings, home runs allowed, ERA, and FIP. They did manage to strand more runners than average, 75% to 73.7%, while also having a below-average BABIP against them. These two factors would likely largely offset their inflated home runs allowed. The takeaway is that the 2012 relief corps was, as a group, mediocre. That being said, it had its bright spots....er, spot? 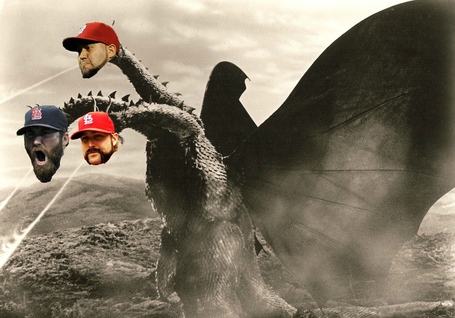 The three-headed monster of Mujica, Boggs, and Motte (MUBOGMOT, as pictured) proved quite effective for the Redbirds. Boggs and Motte performed well throughout the season's entirety while Mujica and later Rosenthal proved effective down the home stretch of the season. The foursome were the only relievers with 20 or more IP to finish the season with ERAs lower than the MLB average relief pitcher ERA of 3.77.

The positives of 2012 require some grains of salt when looking ahead to 2013. Motte and Boggs seem unlikely to hold opposing batsmen to a BABIP in the .240 range. Each also posted an ERA significantly below his respective FIP. Mujica put together an excellent 26 1/3 innings wearing the birds on the bat, but it would be unrealistic to expect either a 1.03 ERA or 2.34 FIP over a full 162-game season.

To get an idea of what to expect from the Cardinals bullpen in 2013, I took an average of the following projection systems: Bill James, ZiPS, PECTOA, Streamer, and Marcel. I cheated somewhat here. I think Shelby Miller is the prohibitive favorite to win the No. 5 starter slot, so I excluded him. Consequently, I included Joe Kelly and Trevor Rosenthal. The projections for these two are a mishmash of starting and relieving. I've included the IP totals so that you can feel free to adjust was you deem appropriate.

*No Bill James projection was available.

The projection averages forecast regression nearly across the board. Some of it is good (Salas) and some of it not so great (Boggs and Mujica). For those worried about the more expensive Motte, he has the best average forecast of the lot. Because of the inherent volatility of relief pitching, it's a good bet that there will be a reliever who struggles in 2013 as Salas did in 2012. In that same vein, a reliever will likely success in the same way Boggs did last year. In 2013, the Cardinals bullpen looks to be fairly average.