The St. Louis Cardinals needed a healthy season from one of their damaged front-line starters. That leaves—Jaime Garcia.

Share All sharing options for: Jaime Garcia's health is crucial as the St. Louis Cardinals react to Chris Carpenter's injury

Looking back on 2013 the St. Louis Cardinals would probably be perfectly happy to have cobbled together a full season of starts from Chris Carpenter and Jaime Garcia. Unfortunately for Garcia, that theoretical platoon turns out to look a lot like the full season the Cardinals hoped to get from Lance Berkman and Carlos Beltran in 2012.

Chris Carpenter: Requiem for a Warrior 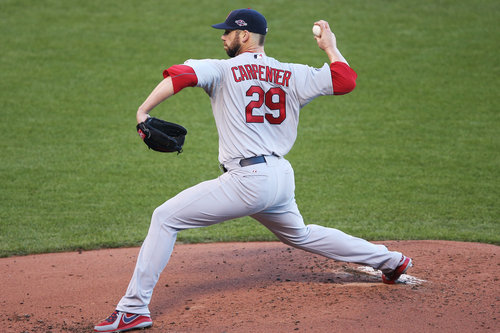 Fortunately for Cardinals fans: Jaime Garcia is already throwing! Derrick Goold posted the proof on Instagram! Which is to say that if he were going to have Carpenter-type problems, where he tries to start throwing and realizes he can't do it, they would probably have already cropped up by now. That only leaves—well, a million other shoulder-related ways for him to be ineffective or miss significant time. But it takes one off the list!

The back of the rotation—where Shelby Miller, Trevor Rosenthal, Joe Kelly, etc. are already queuing up—will get more attention, but expectations for Garcia have gotten so low that he's one of the Cardinals who might actually surprise us positively in 2013. As disappointing as his ERA and his results were, is FIP and xFIP were in line with his career in 2012 when he was on the field.