With a 2-0 NLCS lead over the Dodgers, the Cardinals face lefthander Hyun-Jin Ryu in Game 3 at Dodger Stadium.

The St. Louis Cardinals will take the field at Dodger Stadium for today's NLCS Game 3 with a 2-0 series lead over Los Angeles. The Redbirds will start staff ace Adam Wainwright. The Dodgers will hand the ball to Hyun-Jin Ryu, a lefthander they signed out of Korea during last offseason's Hot Stove.

The Dodgers paid a $27.7 million posting fee to the Hanwha Eagles just for the right to attempt to sign Ryu. Negotiations generated a six-year contract worth $36 million. After concerns were raised during spring training about the 6-foot-2, 255-pounder's conditioning, Ryu's salary is looking like an absolute bargain.

In his first MLB season, Ryu notched 192 innings over 30 starts. The lefty amassed 3.1 Fangraphs WAR (fWAR) over those 192 innings. Ryu was one of 18 National League pitchers who totaled 3.1 fWAR or more during the 2013 regular season. Ryu's fWAR gives us an idea of the overall value Ryu brought to Chavez Ravine. The following chart shows how his rate stats compared to the average 2013 NL starting pitcher.

Further parsing of Ryu's stats reveals a curious reverse platoon split. The lefty was actually more effective against righthanded batters than lefthanded batters during the regular season. This is true whether one looks at Ryu's performance or the results batters generated against him.

Ryu's pitch usage becomes all the more interesting against the backdrop of this reverse platoon split. The Pitch F/X data available at the wonderful Brooks Baseball gives us some insight on the southpaw approaches lefthanded and righthanded opponents.

Against lefties, the southpaw is by and large a two-pitch pitcher. Combined, Ryu throws his four-seam fastball (58%) and slider (29%) approximately 87% of the time. Ryu works the outer part of the plate when throwing his four-seamer against lefthanded batters and will also change the hitter's eye level by working up and down in the zone with the pitch, as the following chart shows. 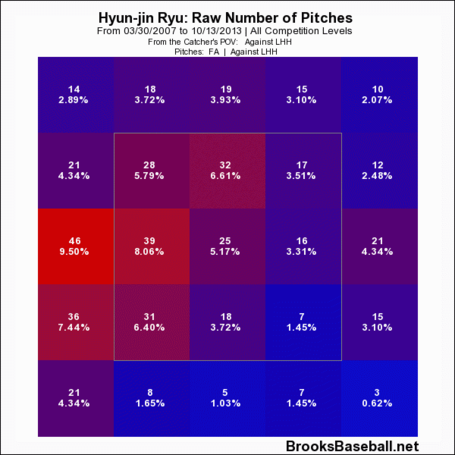 After establishing the outside part of the strike zone, Ryu then attempts to get opposing lefthanded batters to chase his slider outside the strike zone and away. 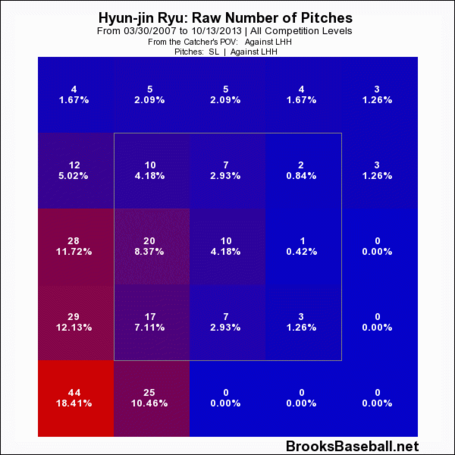 Against righthanded batters, Ryu deploys his repertoire in a bit more balanced fashion. Whereas Ryu frequently throws his slider against lefthanded batters, he rarely does so against righties. Instead, Ryu works primarily with his four-seamer and changeup. 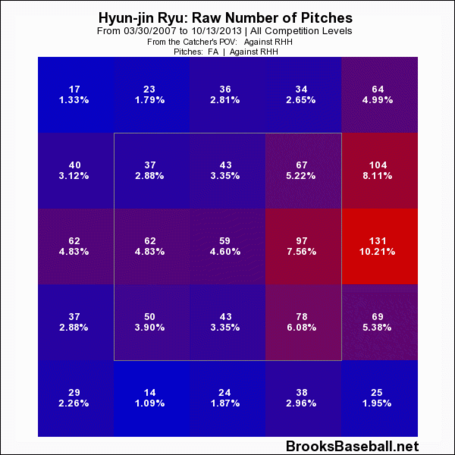 While Ryu will work inside and out with his four-seamer against righthanded batters, he does throw it most often to the outside part of the plate in order to set up his change. Ryu typically throws his change in a complementary fashion--off the outside corner, attempting to induce his opponent to chase its diving action out of the zone. 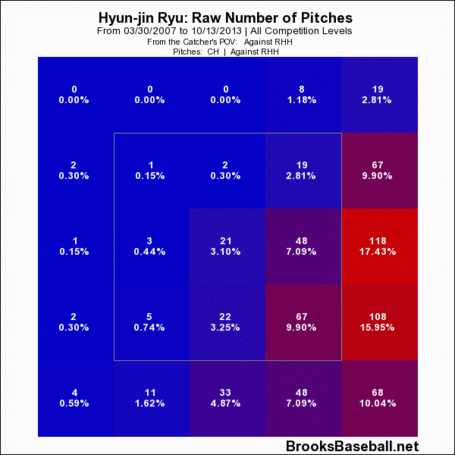 Against righthanded batters, Ryu utilizes his slider in the exact opposite way of his change. Ryu prefers to attack the inside part of the zone with his slider against righties, likely to keep them honest against his four-seamer and change. 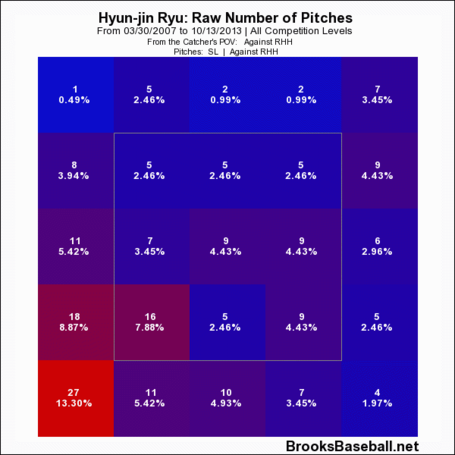 The Cardinals were one of the worst teams in baseball against lefthanded pitchers during the regular season. On Saturday, they managed to beat the game's premiere southpaw with one run on two hits. While Ryu is no Clayton Kershaw, the Korean portsider will nonetheless pose a challenge to this Redbirds lineup.