while it's totally logical to consider fatigue as a possible explanation for late-season struggles, many people are wielding the "fatigue" claim like a bludgeon every time a pitcher has a couple bad outings.

however you look for evidence of such fatigue (other than in the incredibly imprecise line score), the evidence just isn't there for adam.

we had some good discussions about control and fatigue back when lance lynn was looking hittable. even if you think control is a sign of late season fatigue, it's not there for waino.

nor do his august stats show signs of his control declining on a per pitch basis. in may and june, he threw 206 and 216 balls. in august, he threw 196.

if you're looking for evidence that he's losing velocity, you won't find evidence of fatigue there. his pitch f/x chart shows his game-by-game velocity has looked pretty decent in recent games, even if he's not back to where he was a few years back. his 4-seam: 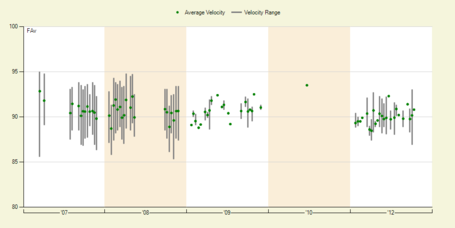 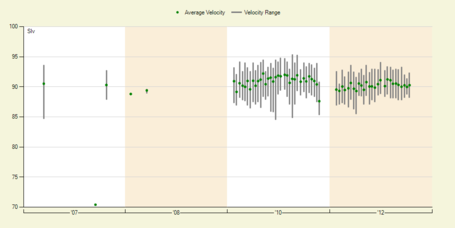 every pitcher gets hit around in a few games. adam had two rough outings in a row. but there's no particular reason to think that the calendar is the cause, rather than the myriad other reasons that a pitcher might allow 5 runs.

last night's performance wasn't even terrible, other than its brevity and the number of runs scored. both wainwright and RA dickey gave up 8 hits, both struck out five, both gave up a homer. dickey went six and two-thirds innings, and adam went five. adam gave up two walks, and dickey gave up one.

i really don't see anything in this game worth tearing our hair out for. his shorter outing on august 31 was ugly, but doesn't appear to be part of a larger trend.

for whatever reason, a lot of people apparently familiar with the game of baseball are unable to see a couple of bad games without needing to turn the events into a story. the best evidence indicates adam wainwright had a couple bad games; saying anything beyond that - without pointing to any other evidence - is just speculation.