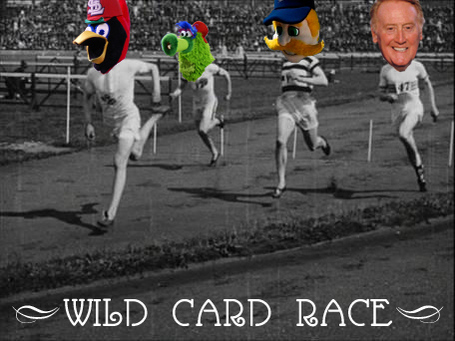 After Sunday's afternoon games, the Cardinals and Dodgers remain in the same position as they did entering play today while the Phillies have dropped and the Diamondbacks have climbed. The Dodgers must win tonight on Sunday Night Baseball to keep pace with Milwaukee and St. Louis. Here are the standings after the afternoon games and before tonight's Reds-Dodgers game.

After the jump, a recap of today's afternoon games and a look ahead for the National League Wild Card competitors.

The Cardinals beat the Cubs at Wrigley on Sunday afternoon in a game less dramatic than the clubs' previous two encounters. Kyle Lohse made yet another quality start for the Redbirds, allowing threes run on fives hits and a walk over six innings pitched. Lohse also notched five strikeouts on the afternoon. MUBOGMOT handled the final three innings without allowing a run. Motte recorded his 40th save. The Cards' offensive effort was led by Allen Craig, who went three for four with a walk and knocked in two runs. Also of note, warlock shortstop Pete Kozma jacked his first MLB homer. The 6-3 win was the Cardinals' sixth win in their last seven games. St. Louis now flies to Houston for a three-game series against the Astros beginning Monday night.

Next Series: The Cardinals fly to Houston for a three-game series beginning on Monday night.

The Brewers continued their red-hot play with their second win in three games at Washington. Despite only plating two runs with their eight hits in four innings against zombie Chien-Ming Wong, the Brewers defeated the Nats 6-2. Starter Yovani Gallardo allowed two runs in five innings before the Milwaukee bullpen took over. A unit that struggled much of the season tossed four shutout innings against Washington. The offense knocked the ball around the park, tallying 15 hits on the afternoon. Six Brewers had two hits or more. The fourth game of the series will take place in D.C. on Monday afternoon.

Next Series: After playing the Nationals on Monday, Milwaukee flies to Cincinnati for three games.

The Dodgers play the Reds tonight on Sunday Night Baseball. In order to keep pace with the Cardinals and Brewers, the Dodgers must win. To do so, L.A. will need their bats to wake up. They're averaging 2.68 runs per game this month and are coming off a shutout at the hands of Mat Latos on Saturday.

Next Series: After playing Sunday night in Cincinnati, the Dodgers fly to San Diego for a series starting Tuesday.

I dropped the Diamondbacks off the Wild Card race updates, but their series against the hapless Rockies has allowed them to leapfrog the Phillies in the standings and back into the update. Arizona outscored the Rockies 10-7 on Sunday afternoon, the D-Backs' third straight win over Colorado. On Monday, the Diamondbacks will go for the vaunted four-game sweep.

Next Series: After playing the Rockies on Monday, Arizona faces the postseason-bound Giants.

The Phillies lost a pitching duel in Atlanta on Sunday. Tim Hudson took the requisite twelve paces and fired a lethal shot through the heart of Cliff Lee. In reality, both pitchers threw well enough to win. Hudson lasted 7 1/3 innings, allowing a run on two hits and a walk with four strikeouts. Lee threw eight innings, giving up two runs (one earned) on nine hits with eleven strikeouts and zero walks. The Braves' decisive run came via a Dan Uggla sacrifice fly in the third inning. The loss deals a major blow to the Phillies' Wild Card chances.

Next Series: The Phillies fly home for a series against the postseason-bound Nationals beginning Tuesday.