First of all, THANK YOU VEB.

I just did the math, and over $3500 of our total funds raised came from YOU. We had everything ranging from small donations to huge donations, both anonymous and claimed with pride. Every dollar went to a terrific cause and helped us surpass our goal, which we wouldn't have even sniffed without your help. Thank you so much! Like so many of us here, I came for the writing, but stayed for the community. You all are the best. 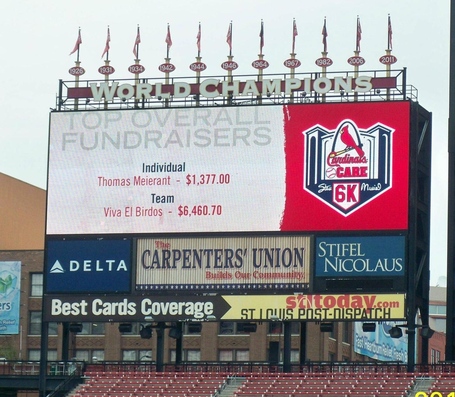 I'll give a brief report of the general day here with a few key pics, but I'll post more of my individual stories in the comments, and I hope my teammates will do the same. Also, I invite everyone to put many, many photos in the comments section with impunity. There are lots of great pics that our wives and girlfriends took, plus the official ones from cards care aren't even up yet.

We met up at Azru's and walked on over to the stadium. We milled around for a bit while waiting for things to get started, which were delayed around 15 minutes. 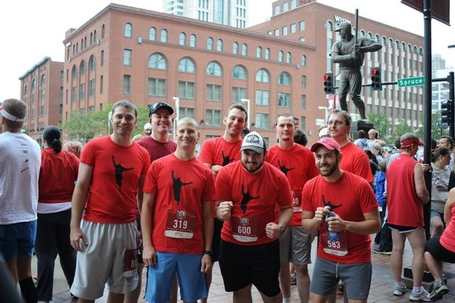 Now that we've all outed ourselves, From left: Scoot, Azru, myself, Hazel, Buddha, Evilfrog, Pattimagee in the front right, and SecondHalfMatt in back of him. The shirts came out fantastic. Note scoot's tight, form-fitting shirt with the girlish arms. That's because it's IHB's shirt. I'll let him tell the rest of that story.

They called us to line up by expected time. This was very useful for Pattimagee, Hazel and myself, who all started in the front or toward the front, but not so much for everyone else, as they will surely report.

We got some brief thank you's and announcments from Jackie Joyner Kersee, Caitlin Motte, and some PR people, and after our patriotic song moment, we were off.

The course started up north on 8th, turned around and wrapped around the east side of the stadium. We traveled south on Broadway for around a mile to Lafayette, then headed back North. We took Chouteau west to 7th, and headed back north to the stadium. We entered in some mysterious parking area, wrapped around a few hundred meters in tunnels, then entered in right field. We wrapped around on the warning track and ended in left. Jackie Joyner Kersee and others were there to put our medals on, and then we were ushered up to the stands near 3rd base, and out into the halls where we could check our times and take advantage of free cookies, fruit, and drinks. 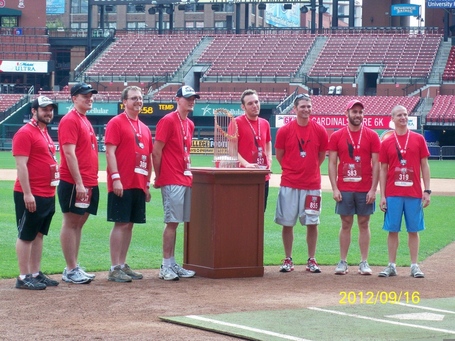 We were told very clearly not to touch it, as "it costs $1100 to clean." Both scoot and my father asked if they could lick it. They were told no. 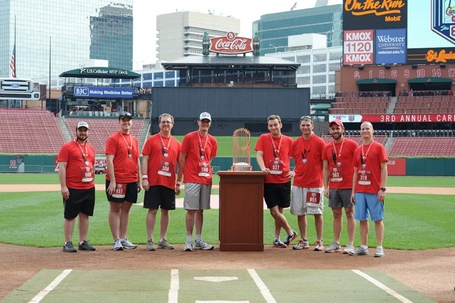 We hung out in the dugout for a while with the race winners while waiting for the ceremony to begin. 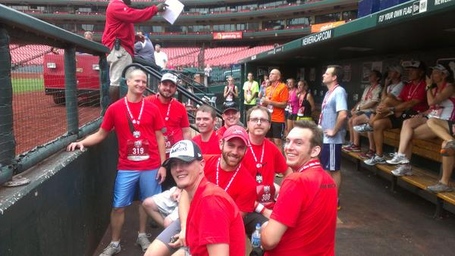 We spoke briefly to Caitlin Motte, who seemed very nice. After the winning runners got their plaques, we were invited up on top of the dugout for pics. JJK handed us nice certificates (I'll insert a pic here when I have some time), and we were thanked and applauded for, etc. 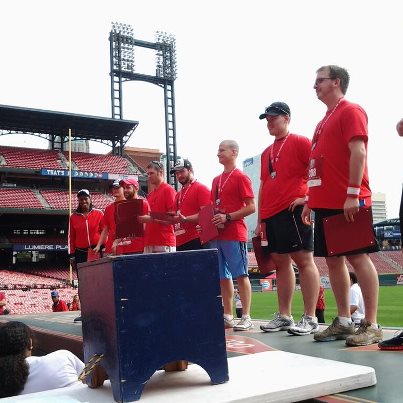 There's JJK on the left. This is a crummy pic, and I'll replace it when something better comes along.

It was a great experience, and I think many of us are resigned/excited to do it again next year.

Thank you all so much, and three cheers for Evilfrog for organizing this, and for the incredible shirts!

Runners, let's see your pics, and hear your individual experiences below.