In Celebration of the 1982 St. Louis Cardinals

Share All sharing options for: In Celebration of the 1982 St. Louis Cardinals 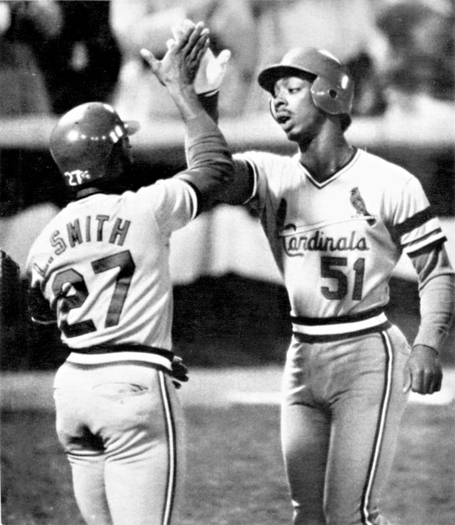 Over the weekend, the Milwaukee Brewers came to Busch Stadium to take on the St. Louis Cardinals in an intra-division matchup that would normally be a run-of-the-mill series in August's dog days. This year, however, the matchup marks a thirtieth anniversary celebration of the club that won the Cardinals' tenth ninth World Series championship. The weekend was a celebration of good times, with even the Brewers getting into the spirit with lovely 1982 throwback uniforms to match our Cardinals'.

This post is a look back at the 1982 World Series champions.

On any give game day at Busch Stadium, one is likely to see a jersey with No. 1 "SMITH" on the back in "victory blue." The problem with these jerseys is that Ozzie Smith was not the only Smith on the 1982 St. Louis Cardinals; in fact, he wasn't the best Smith on that club. Lonnie Smith posted a .307/.381/.434 line over 672 PAs that year, which was good for a team-leading 136 wRC+ and .373 wOBA. Worth 7.0 defensive runs by Total Zone, Smith led the '82 club with 5.4 fWAR en route to finishing second in the National League Most Valuable Player vote. For context, Smith posted a higher fWAR in 1982 than either Pujols, Holliday, or Berkman did in 2011. Given how excellent Smith was for the world champs, one wonders why we don't see a few more No. 27 "L. SMITH" jerseys in victory blue at Busch.

1982 was Smith's first season in The Birds On The Bat. He was hit by a bout of bad batted-ball luck. His .259 BABIP held down his offensive line. Even so, Smith managed to walk in 12% of his PAs and posted a .339 OBP despite a .248 BA. His .303 wOBA was good for a wRC+ of 88. SSmith's defense at shortstop was incredible. By Total Zone, he was worth 21 runs on defense alone. It's a testament to just how great Smith was with the glove that this ties for his second-best fielding season by Total Zone. Slightly below-average offense plus Smith's exceptional defense equaled a 4.1-fWAR player that year.

The other half of the Cardinals' double-play combo that season put together a similar season. Herr walked in 10.2% of his PAs, which allowed him to post a .341 OBP despite a .266 BA. Herr's .305 wOBA and 90 wRC+ were posted without a single homer and combined with excellent defense to give the Cardinals a 3.1-fWAR second baseman.

Rounding out the infield was Oberkfell at the hot corner with a most cromulent offensive line of .289/.345/.379 (.317 wOBA). His nearly league-average production (98 wRC+) combined with very good defense to give the Redbirds 2.6-fWAR. Oberkfell's 8.0 fielding runs by Total Zone were third-best in MLB that season, but still the lowest Total Zone rating amongst the infielders--a testament to just how good his cohorts were.

In his rookie season, McGee played in 123 games, totaling 439 PAs. He stole 24 bases and walked in an incredibly low 2.7% of his PAs. McGee's .296 BA made him a great offensive player to my childhood self when scanning the back of his baseball card. Nowadays, though, we know that he paired that BA with a .318 OBP, which is not very good. Nonetheless, his line was only barely below-average, equating to a 96 wRC+. His base-running skill gives him a .315 wOBA for the year. For some reason, Total Zone doesn't like his defense for the year (-4.0) and so McGee posted 1.0 fWAR.

Forsch was a solid No. 2 starter for the Redbirds. He totaled 233 IP with a 3.48 ERA and 3.76 FIP. If Andujar's K/9 rate is surprising, Forsch's is astounding. His K/9 of 2.67 was the second-lowest amongst qualifying starters behind only Mike Caldwell of the Brewers (who threw 258 innings with a 3.91 ERA). Forsch posted a 2.9-fWAR season.