Here's a look at today's St. Louis Cardinals trade gossip on the internet from this Trade Deadline Eve.

Derrick Goold, ace St. Louis Post-Dispatch reporter, has an article featuring a quote from general manager John Mozeliak for us to parse.

"We've kicked the tires," Mozeliak said. "It's just we're not finding the right fit out there right now."

This quote tells us that the Redbirds are performing their due diligence, inquiring about potential trades. It also tells us that the Cardinals are finding the asking prices not in line with what they're willing to give up on the day before the non-waiver trade deadline. And, of course, the Mospeaky inclusion of "right now" informs us of the fluidity of the situation and that trade talks could take a turn toward fruition at any time (or not at all).

It seems that Tampa Bay may not pull the trigger on a James Shields trade after all. The Rays are just 2.0 games back in the Wild Card race with Evan Longoria nearing his return from injury. This has reportedly made them less likely to trade James Shields, a workhorse starting pitcher that Joe Strauss of the Post-Dispatch and other MLB gossips of national repute have tied the Cardinals to in their trade deadline rumormongering. With the Rays' asking price reportedly "north of Greinke", one wonders how serious a contender the Cards ever were for the 30-year-old righty.

The Phillies have reportedly gone into sell mode as they attempt to lower their payroll so as to not feel the bite of the MLB luxury tax. On the block are veterans Hunter Pence, Shane Victorino, Ty Wigginton, Joe Blanton, and Cliff Lee. Britt Ghiroli of MLB.com reports that their is a bit of a bird fight for Blanton with the Orioles, Blue Jays and Cardinals are interested in the right-hander. However, the Orioles are the ones most interested.

Buster Olney speculated via Twitter that Lee may be a potential fit for St. Louis.

TOTAL SPECULATION: You wonder if the Cardinals, with expiring contracts for Berkman/Westbrook/Lohse, would have any interest in Cliff Lee?

Jeff Passan was quick to douse this speculation with cold water via a tweet of his own.

Quell the Cliff Lee-to-the-Cardinals speculation. Even if Philly kicks in $ source says "extremely doubtful" St. Louis tries to acquire him.

Joe Strauss took to the radio waves and shared that the Cardinals have had internal discussion about Taveras. Not about trading the younger slugger, but about promoting him. Not promoting him to Triple A, but to St. Louis. This is an interesting turn-of-events, one I'm not sure what to make of. Would it be best for Taveras to go to Triple A or skip Memphis and come straight to majors? I don't know. The notion immediate brings to mind Angels 20-year-old MVP candidate Mike Trout. Both for his drool-inducing upside and his rough big-league start. In 2011, Trout made his big-league debut straight out of the Texas League and he hit for the following line:

There's little reason to think Taveras would perform much better. But what if he did?

The St. Louis Curse of -lby continued at a pace that even Co-lby Rasmus would find amazing as the national gossips have taken to piling on She-lby. Jayson Stark used his Grumblings post to allow someone with a rival club to trash Miller anonymously. Remember in spring training when the Cardinals were upset because Miller came to camp with a too-skinny physique? Well, now he's apparently too fat.

The Cardinals have never been more open to dealing their onetime top prospect, Shelby Miller. But his stock has plummeted dramatically. "We've lost interest. I know that," said one NL executive. "The stuff coming out of his hand isn't as good. And the body doesn't look good. He's gotten a little heavy, and he's not the same guy."

But don't just take this anonymous NL executive's word for it. See for yourself just how chubby Miller has gotten. Here's a picture of Miller with the I-40 Cup from July 7, 2012, from Chirp Chatter, an MLB Pro Blog. 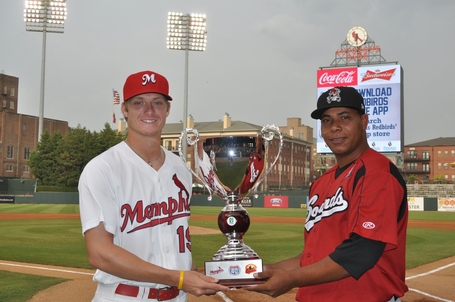 Lastly, I leave you with Grant Brisbee's well-written post calling the Cardinals "baseball's weirdest team" this trade deadline. An excerpt:

The St. Louis Cardinals might be worried they're slipping out of the race, so they're being careful on the trade market. The Cardinals also don't have many holes. That's a weird combination of sentences.