Being the 100th Best St. Louis Cardinal of All Time

Share All sharing options for: Being the 100th Best St. Louis Cardinal of All Time

How far back do you have to go, down the list of Cardinals greats, to find a player you booed, or would have? Not very far, I don't think. That was my take-home from all the lists in Bill James's Historical Baseball Abstract—the best right fielder might be Babe Ruth, and the 20th-best right fielder might be a borderline Hall-of-Famer, but get to 50 or 60 and you've got the likes of Reggie Sanders in there.

bWAR is a good way to start this conversation—Stan Musial is first, with 123.4, and Lou Brock is 10th, with 39.9, but Ray Lankford is 16th (35.3) and Brian Jordan is 45th. Matt Holliday, who still seems like an interloper to so many Cardinals fans, has the 66th-most wins above a replacement player of any Cardinal who ever lived—and that's before taking his peak ability, how much value he's packed into so few games, into account.

So what's it like to be the 100th-best St. Louis Cardinal of all time? I'm hoping, if nothing else, that discovering that gives some journeyman ex-Cardinal a thing to write under his name when he's signing baseballs at the Winter Warm-Up. And who on the 2012 team has a chance to break into this list, or to run further up it?

By bWAR, the entrance fee for consideration among the 100 best Cardinals of all time is about 10 WAR. You can do that in one year, if you're Albert Pujols, or five, if you're an average baseball player. Here's who's on that list:

On my spreadsheet, at least, the 100th best Cardinal of all time—assuming no error on bWAR's part, which is one of those things you can do when your spreadsheet is not doing anything important—is Yank Robinson, a 19th-century infielder who came to my attention when I was making up the stolen base lists in The Ultimate Cardinals Record Book.

Yank started at second base on all four of the Browns' mid-1880s World Series teams, back when second base and third base were reversed on the defensive spectrum, and was kind of a poor man's Cupid Childs, leading the American Association twice in walks and once leading it in on-base percentage (.400) despite batting just .231. He was also an accomplished baserunner, stealing 75 in 1887.

He was a fine player for four years before falling off abruptly at 29, whereupon he jumped from the Browns to the rival Players League in 1890. He came back to the vastly weakened American Association the next year, and then spent a season in the National League, but he was done.

At 10.4 WAR in his Browns career he's the kind of guy who is mildly underrated by a flat WAR list; he had a short career, especially in St. Louis, and it looks a little shorter still because they didn't play 162 games back then. This low on the list, in particular, you can be a good player for a few years, or an okay player who sticks around the team forever.

With Colby Rasmus (6.5) and Brendan Ryan (7.1) purged, the nearest active Cardinal to 10 WAR is Jon Jay, who has 5.4 in his Cardinals career to this point. He needs about two seasons at his current level to dethrone Yank Robinson, though Robinson would probably win that battle on peak considerations. David Freese and Kyle Lohse (4.9), Jason Motte (3.9), Lance Berkman (3.8), and Allen Craig (3.6) are next on the list; if Craig is as good as he's appeared to be in 2011 and 2012 he could move up the list quickly.

None of these players seem like threats to get much higher up the list, though; Jay would need to be an average starting center fielder—specifically, the Cardinals' average starting center fielder—for five more years to get into the Top 70, where you have guys like Pepper Martin and Edgar Renteria. Lance Lynn has a shot if this year isn't a fluke.

The contenders for the bottom of the Top 50 players in Cardinals history are a little less than twice as valuable as the contenders for the Top 100. Mark McGwire, at 18.4, happens to be 50th on the nose, although that requires an incredibly negative view of his defense and no allowance for peak performance. He edges out Ripper Collins and Ernie Broglio, guys like that.

Players with 20 WAR have made an undeniable impact on the Cardinals franchise. Between 18 and 22 you have Joe Torre, Whitey Kurowski, John Tudor, McGwire—stars for a few years who helped define their Cardinals era. Adam Wainwright's already on this list (20.7), thanks in part to his hitting. Yadier Molina probably is, too; he's got 16 bWAR but 22.9 fWAR, thanks to some very different measurements of catcher defense.

Matt Holliday's a little less than one Matt Holliday season from joining this tier. Right now he's at 16.1 Cardinals bWAR, which puts him just outside the Top 60. Give him 15 WAR through 2016—a conservative estimate, I hope—and he's inside the Top 20, which will hopefully be enough to get the Church of Clutch off his back.

30 WAR gets you inside the list of the Top 25 Cardinals of all time. It's all big deals, from here on out; Max Lanier, who clinched the Cardinals-Browns World Series and defected to the Mexican League while he was at it, is 25-by-default, with 28.6 WAR. That puts him between Marty Marion (29.6) and Mort Cooper.

Holliday appears to be on his way here, and if Wainwright sticks around he could join him. Molina's entrance depends on whether Baseball-Reference ever updates its catcher WAR, which is one of many reasons I wouldn't do an actual ranking with one statistic and no manual adjustment or thought. The Cardinals' active leader in bWAR is Chris Carpenter—he's at 25.3, and 30 looked readily attainable before he missed all this year.

It's a long way up to the top of this list. Let's use Oscar Taveras as an example—he might actually be the second coming of Vladimir Guerrero, but to reach the Top 5 of this list, to dethrone Ozzie Smith, he would have to be Matt Holliday for about 12 seasons in a row.

The Cardinals have been around for well over 125 years now, and there've been so many good players that Yank Robinson's name can go unspoken for months at a time. Good players show up every year; every prospect and near-prospect in the Cardinals' system might be, eventually, the 100th-best Cardinal of all time. That's the space in which we spend most of our time arguing, the gap between Future Redbirds's 10th-best prospect and its 20th. Being a great player is something else entirely. It's climbing all the way up this: 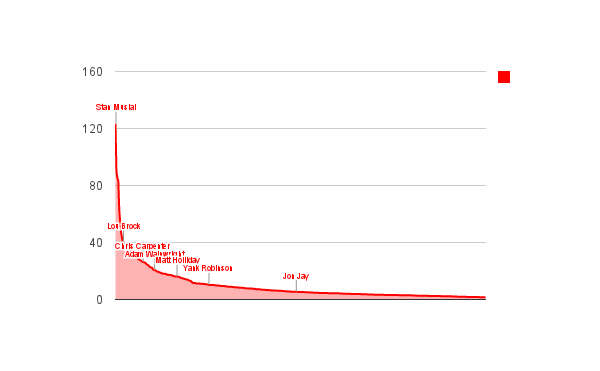 Cardinals since 2000 on the bWAR leaderboard