Share All sharing options for: Brian Fuentes and the Approaching Trade Deadline

In an alternate universe, Tony La Russa, still managing the Cardinals, is thrilled to find out that the team has acquired Brian Fuentes. I can write that today but I could have just as easily written that at the trade deadline in 2008 or during the 2009 offseason.

Back in 2008 after spending six years with the Rockies, Brian Fuentes was on the trading block. The Cardinals were going through a spurt not completely unlike what they are going through today. A struggling bullpen with faltering lefties (prior to the addition of Barrett Browning) is costing the team games. In 2008, the Rockies were looking for a big haul from their prime trade bait in Brian Fuentes. Something along the lines of "two top prospects" was being bandied about and the Cardinals were rightly scared to dip their toes in those waters.

That was back when Fuentes was an elite pitcher. In 2008, Fuentes -- who would not be traded at the deadline -- was in the midst of striking out better than a batter an inning for the 6th time in 7 seasons. The Cardinals were also in the midst of a bullpen renaissance with the emergence of players like Chris Perez and Jason Motte who had so much potential but had most failed to realize it at that point.

In the 2009 offseason, the Cardinals were very much interested in Fuentes. But this was the age of crazy reliever contracts -- Ruben Amaro has studied this era extensively and would like to return -- with Francisco Rodriguez setting the all time saves record and the Cardinals would not participate.

Now, 4 years after kicking the tires on Brian Fuentes and after he signed a $30M dollar deal, they've signed him to a minor league contract.

There's some reason to think that Brian Fuentes may still have a role in the majors. In 2010 & 2011, Fuentes had about 35 innings versus left handers and wasn't terrible. 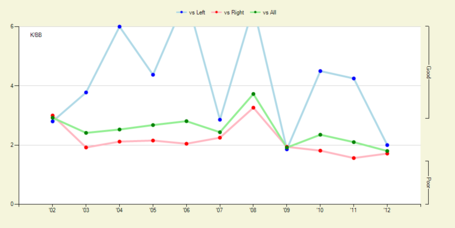 You can see from this fangraphs chart that during 20110 & 2011, Fuentes actually maintained a 4:1 K:BB ration against left handers. He was below 2:1 when facing right handers. If Fuentes is going to be of use to the Cardinals, he has to be employed in the strictest of platoons. There's another important reason to keep him away from right handers. The home runs ... oh god, the home runs ... 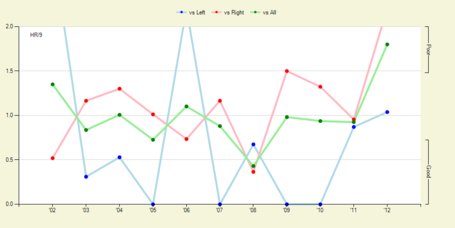 That's some off the charts terribleness against right handers this year but a general susceptibility that dates back to 2009. It seems like adding tinder to a smoldering pile of cinders to toss another home run prone pitcher in the Cardinals bullpen but careful platoon management should help mitigate that.

It's too neat a conclusion to say that Brian Fuentes is done. Relievers are volatile commodities that aren't uni-directional in their fluctuation. A reliever that cleans up a mechanical mistake or simply gets better luck can revitalize a career.

It's certainly worth a minor league deal to see what Fuentes has left in the tank. If the bullpen needs an issue addressed, the right handed relief looks to be the weaker aspect of the pen (I've had my fill of Victor Marte in anything resembling a close game).

In 2008, Brian Fuentes was going to cost the Cardinals far more than he was really worth to them in a trade. This is too often true of trades for relievers. Given the prolonged absence of Chris Carpenter and the lingering uncertainty of Jaime Garcia, the stronger deadline move looks like a starter acquisition to me and a move of Joe Kelly to the pen (though I'm not ready to sell on him as a long time starter). If I'm pining for a starter -- and I don't know that I am -- poaching Francisco Liriano out of Minnesota seems like the best cost/benefit purchase to me. The Cardinals are 2.5 games out of first (as of this writing). They don't need to do anything but they may want to do something.