How To Be a Jim Edmonds Highlight (in Five Steps)

Share All sharing options for: How To Be a Jim Edmonds Highlight (in Five Steps)

(Editor's note: I have one more ridiculous travel weekend coming up here before I'm back in the states, and Samsung is sponsoring a series of posts on the network about our favorite sports highlights. Mine mostly involve this guy. I'll return to analyzing the 2012 Cardinals as soon as I am un-jetlagged and near a consistent internet connection.)

1. Appear to be surprised by your own greatness. Every great Jim Edmonds play appears to surprise Jim Edmonds.

The canonical example as a Cardinal is his leaping behind-the-wall catch of Jason LaRue's home run ball, but after nearly ever Edmonds catch there's an aww-shucks moment like this one. "Did I do that? Me?" he seems to be asking. "I guess I did!" It's not "Look what I found!" so much as, "Can you believe I found this? Huh."

2. Do not actually be surprised by your own greatness. Jim Edmonds was a little slow for a center fielder; I think that wraps it up for a discussion of his faults as a baseball talent. At the plate he had an inevitable-looking uppercut that seemed to come out of a dead stop, without a step forward or a big, threatening waggle or any other power-hitting tics, and in the field he had a basketball player's body control and the perfect understanding of positioning and space that gets written off as instincts.

He was a little slow for a center fielder and he covered more ground than baseball's fastest players, and in everything he did except respond to himself he appeared to know it. (I don't think you can do what he did, for that matter, without knowing you're capable of it.) So I understand that he could be pleased by making a spectacular catch, pleased enough to pump his fists after pulling a Dan Miceli pitch off old Busch Stadium's scoreboard, but I don't think he could actually be all that surprised.

3. Play to the crowd. You don't hear it in that Angels video at the top of this post—maybe that's because it's such an implausible play, or maybe it's because he hadn't been around long enough—but in a really good Jim Edmonds highlight, the crowd begins to murmur about what a great play they might see about a second before it happens. Someone hits a line drive, and the crowd cheers or sighs in loud unison; Edmonds gets closer to the ball than seemed possible at the moment of contact, and everybody's cheering and jumping is converted into quiet, tense potential energy; Edmonds snares the ball and goes, "Wow, did I do that, you guys?" with his shoulders, and the crowd erupts.

4. Appear, most of the time, to be a regular half-shirt-wearing guy. Edmonds wasn't smooth like Carlos Beltran or Ichiro, loping like an Olympian (either definition) who just happens to be playing baseball, or obviously gifted, like Bryce Harper or Ken Griffey, Jr. From a distance, not moving, he looked a little like a randomly generated baseball player from Triple Play 99. He came to the Cardinals with a reputation as a sulker, an overrated novelty—in short, as someone who looked insufficiently like a baseball hero.

When he struck out, he could look like a slow-pitch softball player caught trying too hard in a friendly game.

5. Appear, for an instant, to be superhuman. That might be why Jim Edmonds's best plays hold up so well to the ten-good-seconds medium of the highlight reel. He was remarkably talented, but it sneaked up to you—he'd swing at three bad pitches up in the zone, grit his teeth like he was about to die, and then take the same swing on a better pitch and drive it over the center field wall. One great-looking swing, there and gone in an instant.

Or he'd run—not gracefully or quickly, not like a center fielder—and he'd run, sprint like he was clearly overmatched, toward the place where the ball was going to land, and you'd get quiet only because you'd seen him do it before, however he did it, and then everyone would get quiet at once as he leapt and then 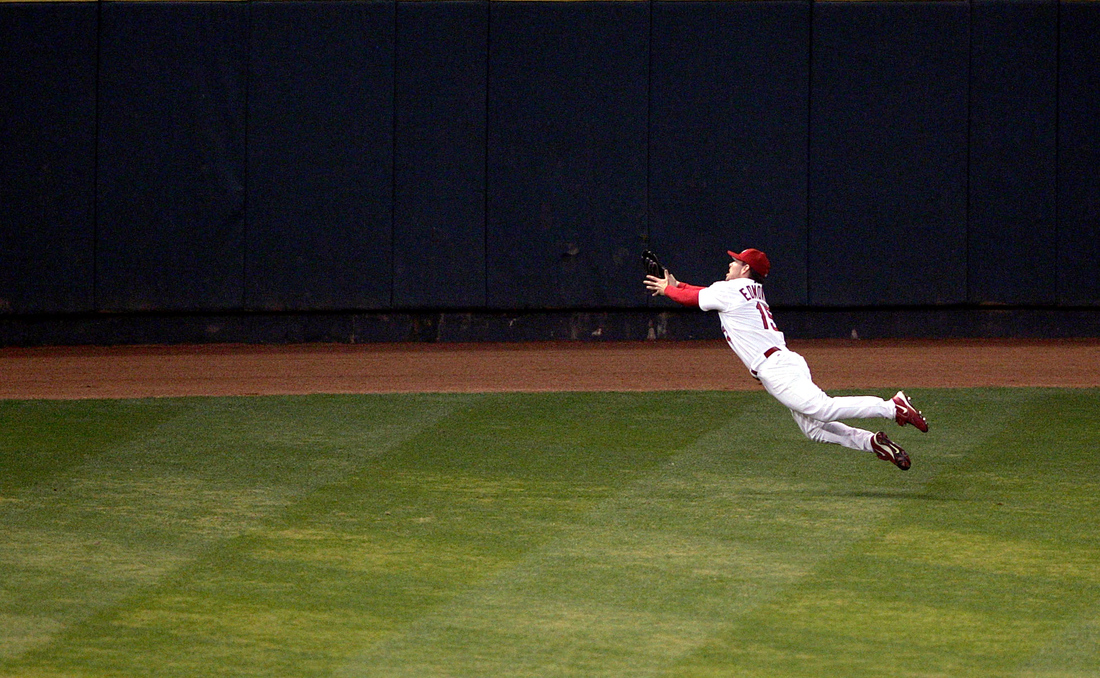