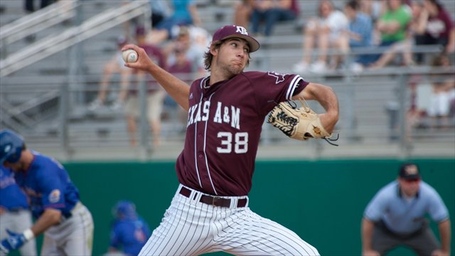 The Cardinals selected Michael Wacha with the 19th overall pick of the first-year MLB player draft. The 6-foot-6, 195-pound right-hander has been the ace of the Texas A&M rotation. Wacha has a decent fastball that has been reported to sit in the low-90s and touch 94-95 MPH. The Aggie starter has a good changeup to complement his fastball and a breaking pitch that reportedly needs work. Similar to Lance Lynn several years ago, Wacha is considered a lower ceiling, higher floor type of pitcher.

The Red Baron had this to say about Wacha in one of his draft reveiws:

Remember up earlier, when I said that thing about college right-handers being kind of the plain best friend of the drafting demographics? Well, I present to you as Exhibit, um, whatever letter you like, Michael Wacha.

Wacha is exactly the kind of unexciting yet oh-so-valuable player that fans hate to see their teams select. It's not because he's bad, or because there's anything wrong with the strategy. It's just not...sexy. He kind of is what he's going to be, at least mostly, and finished products leave so little room for dreaming.

For the record, though, none of those things should keep you from liking Michael Wacha. He's cut somewhat from the Lance Lyn cloth; not physically, necessarily, but in terms of stuff. He works in the low-90s with his fastball, topping out at about 94, and does a nice job keeping the ball down. A solid slider that he likes to throw early in the count when hitters are sitting dead red. A changeup that I really like, with nice sink and fade and really good arm speed. There are outings when Wacha will throw 90% fastball/changeup, with just a handful of sliders thrown in to keep hitters honest.

Wacha's best attributes are the ones that make him so boring, to be honest. He's big and durable, he keeps the ball in the park, and he doesn't walk many. He throws plenty hard to get the job done, and I like his delivery. He does rebound a bit at the end; I would probably try to get him to finish lower, to flatten his back so to speak. Beyond that, though, I like what I see of him mechanically.

Wacha's makeup is a plus as well. He's pitched on the biggest stages college baseball has to offer, and has comported himself well by all accounts. Cool and collected on the mound. Intelligent in his approach. Makes the adjustments he needs to make to be successful. In short, he's got the intangibles to complement his tangibles.

The questions about Wacha are all in regards to his ultimate ceiling. Low-90s fastball, decent breaking ball, plus change, good command. It all adds up to a player who should be successful in pro ball, but just how good can he be? He strikes out a decent number of hitters, but he's still below one strikeout per inning in college, which isn't particularly impressive. His excellent K:BB numbers argue the other direction, though.

Probably the best thing for Wacha, if one wanted him to take the next step, would be to come up with a true swing-and-miss pitch. Of course, that's easier said than done, but a team with an enterprising coach somewhere along the way might be able to try replacing his slider with a curve, or else attempt to add a splitter or something along those lines. Perhaps you catch lightning in a bottle and he turns into Dan Haren. Most likely, though, Wacha is what he is. He's going to settle in the middle of a rotation, give you plenty of good innings, and provide the team that picks him with a ton of very boring excess value. It isn't exciting, but you can build one hell of an organisation with smart, solid draft picks like Michael Wacha.

Wacha's ceiling isn't the highest, but he has a very good chance to be a solid contributor down the road to a big league rotation, I believe. You could do a whole lot worse. And that's assuming he's even still on the board; he's crept into the middle of the first round in some discussions, which means boring or not we may never even get the chance to draft him.