According to Pub Med Health, Thoracic Outlet Syndrome is:

a rare condition that involves pain in the neck and shoulder, numbness and tingling of the fingers, and a weak grip. The thoracic outlet is the area between the rib cage and collar bone.

Here is an image depicting the area described: 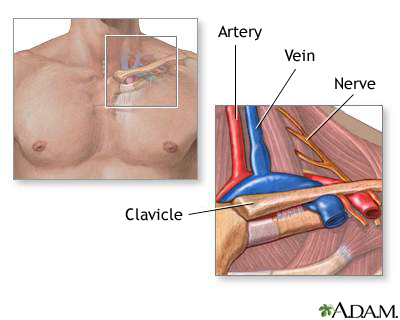 Given the diagnosis and Carpenter skipping such a session earlier in the week, it was somewhat surprising when Jenifer Langosch, Cardinals beat reporter for stlcardinals.com, tweeted that the right-hander had taken to the Busch Stadium bullpen and was throwing. After Langosch's tweet hit my Twitter feed, others rolled in, including this one from Brian Stull of 101 ESPN Radio:

Carpenter felt good about his bullpen session today, will have another bullpen or possible bp session on Monday

Carp diagnosed with Thoracic Outlet Syndrome. Will attempt to pitch through it, then likely undergo offseason procedure, says GM Mozeliak.

The nature of Carpenter's "nerve irritation" has been revealed with a specific diagnosis even if the approach the Cardinals will take toward the condition seems much the same as before. Carpenter will attempt to return to the mound in 2012 without surgical intervention; he will attempt to "pitch through" the condition. Then, after the season, he is likely to undergo surgical intervention.

Right now, Cardinaldom will do what we've been doing for weeks: tracking Carpenter's throwing sessions and their aftermath with bated breath.

The news on injured Cardinals pitchers that broke this afternoon was not only regarding Carpenter. Stull passed along the following news on injured reliever Kyle McClellan and, more importantly, injured starter Jaime Garcia:

If nothing else, the Cardinals ought to have a pretty good idea by late July whether Carpenter and/or Garcia will be able to join the rotation again or whether they will need to explore trading for a starter.