The Cardinals' bats did their best to make the bullpen irrelevant in today's game. After a pair of singles and a walk, Yadier Molina launched a Roy Halladay fastball into the stands in the first inning for a grand slam. Halladay would exit the game in the third inning due to reported shoulder soreness. Yadier Molina would also exit early after showing signs of dehydration.

Meanwhile, Adam Wainwright put up 6 dominant innings allowing just 1 run. Wainwright succeeded in large part by keeping the ball on the ground with a fastball, curveball combination that had 10 of 13 outs on balls in play on the ground. 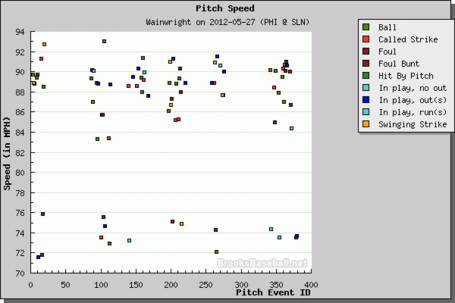 The Cardinals offense would continue to produce throughout the game. In the 5th inning, Carlos Beltran launched his 15th home run. That's good for a three way tie for second in home runs in MLB with the White Sox's Adam Dunn and the Blue Jay's Edwin Encarnacion. It remains 5 home runs behind league leader Josh Hamilton of the Texas Rangers.

The bullpen was largely a non-issue with Marc Rzepcazynski throwing a 1 strikeout perfect 7th inning. Following that Victor Marte struggled a bit to get through the 8th inning aided by some additional stellar glovework from Rafael Furcal. Newcomer Chuckie Fick was unable to close out the 9th with a 6 run lead necessitating Mitchell Boggs to enter and record the last out of the game and give the Cardinals a 8-3 win avoiding the sweep.

The Cardinals play the Atlanta Braves tomorrow at 12:10 CDT.