A New Look A.J. Burnett Blanks the Cardinals in Pittsburgh

Share All sharing options for: A New Look A.J. Burnett Blanks the Cardinals in Pittsburgh

The Cardinals were blanked by the Pirates yesterday in a thoroughly underwhelming affair. Jake Westbrook was effective for 6.2 innings striking out 6. It's at least mildly encouraging to see more strikeouts from Westbrook, whose K/9 continues to dip into dangerously career lows. Westbrook was undone by two players in yesterday game: the speedy Andrew McCutchen who scored both runs and the struggling Pedro Alvarez who collected both RBI.

As Westbrook continues his Best Shape of His Life (R) comeback tour, replete with major weight loss, the Pirates toted out an unexpected starter for yesterday's game. Kevin Correia, the thoroughly mediocre right hander, was replaced by A.J. Burnett who had been expected to make a rehab start in the minors. With 4 mph on his fastball relative to Correia, the former Yankee made the Cardinals look off balance, holding them to a mere 3 hits.

The thing that caught my eye about Burnett's start was not, however, his fastball velocity. I'm reluctant to think that the change in pitching inherently unsettled the Cardinals in a way that caused the bats to go silent. Video scouting reports that they had assembled would have to be revised in rapid fashion and a few of the players probably entered the game less prepared than they'd like to be but Burnett was doing something important yesterday: mixed pitches. 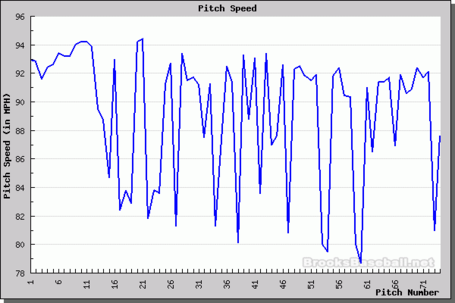 Burnett threw 24 pitches in the first inning, the only inning he needed more than 12 pitches. While it may be coincidental, it was immediately apparent that the first inning was also the only inning he threw more than 5 consecutive fastballs starting out the game with 12 that ranged from just under 90mph to 94mph. Burnett's velocity wasn't particularly impressive -- he looks to have lost 2 mph off his average fastball velocity in the last 2 years.

It wasn't a characteristic outing for Burnett. In the past, Burnett has been hugely reliant on his fastball throwing it 65% of the time. Last year that number started to come down with the Yankees and that trend may be continuing in 2012. It's may be premature to say that Burnett is a new pitcher but it certainly looks as if he's finally gotten the message regarding his declining fastball. That message is learn to throw your curveball and changeup with greater frequency or resign yourself to the ranks of 5th starters.

The Cardinals struggled yesterday but it had more to do with effective pitching from Burnett than it did with the team's surprise that Burnett was on the mound.