The St. Louis Cardinals' most exciting loss of the year and three future relievers

Share All sharing options for: The St. Louis Cardinals' most exciting loss of the year and three future relievers 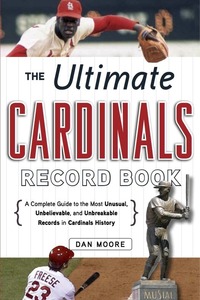 Sorry, guys, but I'm going to be plugging this one for a few more weeks: The book I spent much of last season writing (and rewriting, when the Cardinals did that whole World Series thing), The Ultimate Cardinals Record Book, is now available across the internet. You can read more about it at the official plug/FAQ, and you can buy it, if you're so inclined, on Amazon (that's an affiliate link) or at your local Barnes & Noble. (If your local Barnes & Noble is within like ten miles of St. Louis. If you can see the Arch from the Local Sports section, I can confirm that it is in stock.)

It's got about 50,000 words' worth of me in it, along with—well, a lot of Cardinals Records. More than I thought existed before I was assigned to type all of them into tab-delimited tables. Sometime next week I'll get a sample chapter online.

It's really happening: The Cardinals lost a baseball game yesterday! Kyle Lohse allowed a home run, Carlos Beltran went o-fer, the bullpen was mediocre, and the bats didn't get going until it was too late! As I read the box score post-game I tried to take in every last, boring detail—Steven Hill's surprise appearance, the doubles from three VEB favorites, everything up to and including Pete Kozma appearing as a pinch runner—because a few days from now, none of this stuff is going to be exciting.

Today, it is. The Cardinals played baseball yesterday; they'll be playing it again today, apparently on MLB Network (at a delay) and MLB.TV. You'll get to see Matt Adams do whatever it is he's doing up there, maybe; you'll get to see Jake Westbrook, but also Maikel Cleto.

Speaking of Maikel Cleto: Of all the Cardinals' prospects, I'm least comfortable making a judgment in either direction about his future. John Sickels ranks him 14th, which seems reasonable, but behind John Gast, which seems less reasonable.

I don't know how this works, but I think we're somehow underrating Cleto's performance last season because his stuff is too good. Last year, between high-A and AA, Gast struck out 6.3 batters per nine innings, walked 3.4, and was left-handed across 161 innings. In 134 innings, split evenly between A+-AA and AAA, Maikel Cleto struck out 9.0 and walked 4.3. They're both going to be 23 next year.

I think Cleto's probably just a reliever in the future, but his performance last season suggests we'll need at least another season to know that, much as the Cardinals tried to figure it out early by sending him up three levels in 12 starts.

The Cardinals didn't need another season to know Robert Stock was a relief pitcher. Given the Cardinals' solid(-as-bullpens-can-get), young relief corps I'm a little surprised they didn't wait another season, or at least another few months. Catching prospects—even catching prospects the Cardinals no longer have any room for—seem somewhat more valuable, if they come through, than right-handed relievers, and Stock's collapse, with its weird BAbip action, seemed somehow less conclusive than if he'd just been mediocre for two years.

In any case, Stock joins Scott BIttle on the list of 2009's fascinating early-round gambles that haven't quite panned out. For all that, if we assume he's a second-round-caliber relief prospect, he still has a chance to be one of the first members of his draft class to reach the majors; behind Matt Carpenter, who's already graduated, and Shelby Miller, who will, he'll be competing with Joe Kelly (3), Ryan Jackson (5), and Matt Adams (23), with fellow low-minors reliever Keith Butler another candidate for rapid promotion.

Meanwhile, back in the 2008 draft, Mitch Harris, the Cardinals' 13th-round pick and another fascinating gamble, looks likely to get his first shot at Spring Training in a few weeks. If you're wondering how much time Harris, who was drafted despite a commitment to five years of service in the Navy, has missed, think about how long we've been tossing some of his classmates' names around. The next guy the Cardinals picked was Charles Cutler, 2009's sleeper prospect at catcher and 2012's Pirates farmhand; their second rounder was Lance Lynn, who was, at the time, a lumbering pitch-to-contact Dave Duncan type.

Harris, 26, hasn't pitched at all since he was drafted, and it's far from certain he'll be able to pitch a full season even if he's ready. The discount the Cardinals got was from a baseline of fifth-round-type-talent, which in that draft produced, say, Scott Gorgen. But they've made successful relief pitchers from weirder stuff. And it's something else to root for on Future Redbirds.