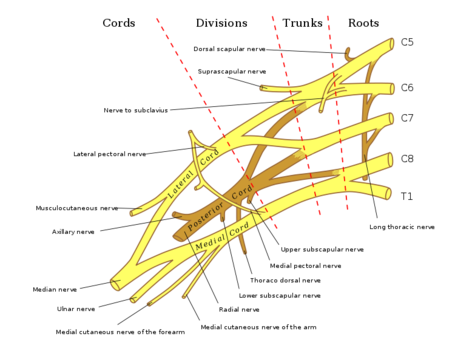 As we are all more than aware of, Chris Carpenter is going to be out for an undetermined amount of time with an injury to one of the nerves in his right shoulder. This post is going to be an attempt to bring everyone up to speed on peripheral nerve injuries, how they are diagnosed, some causes of injury, and various other things that I may find interesting. Bgh had an excellent primer on Carp's history if you are unaware of his previous peripheral nerve injury. Follow me after the jump, if you dare. Warning: there will be medical jargon

We're going to start with a brief anatomy lesson. The above image is the Brachial Plexus. The Brachial Plexus starts where the nerves originate out of the cervical spine and come together and then spread out as they go to various locations in the shoulder, arm, and hand. As the BP progresses, it is divided into roots, trunks, divisions, cords, and finally terminal branches. Terminal branches, or peripheral nerves are what we are interested in here. If you are interested in more on the BP, click the wiki link, or find yourself a first year PT student somewhere, hand them a blank piece of paper and ask them to correctly draw and label it for you. They will greatly appreciate the opportunity to show off their knowledge.

The original belief was that a bulging cervical disc was the issue. As VolsnCards, myself, and Silent Bob each indicated in the comments at various times, this would have been ideal considering the alternatives. I treat bulging discs causing peripheral neuropathy (pain, numbness/tingling, and/or weakness in an area downstream from actual site where the nerve is being compressed in the neck). These can be treated with anti-inflammtory medications, a specific exercise program, manual therapies, and cervical traction to decompress the nerve.

With the way that everything has played out, we can now surmise that Carp was receiving such treatments, as well as resting for the period before he started to throw again. The treatments were believed to be the reason for his improvement and he was allowed to begin throwing again. However, it was probably the rest that allowed for his symptoms to decrease. Once he started to throw aggressively again, the symptoms returned, which indicated to the medical staff that something more was going on.

So, they looked more closely at his peripheral nervous system. We are going to take a more in depth look at a couple of nerves that are possibly the problem here: the Musculocutaneous nerve, and the Suprascapular nerve.

As you can see from the image of the Brachial Plexus, this nerve is a terminal branch off of the lateral cord. If you follow that all the way back (a bit like looking at a tournament bracket and looking back to the first round), you will see that this nerve has contributions from the C5,6, and 7 nerve roots.

You may also note that this nerve is pretty far away from the nerve roots. This means that the muscles and sensory area that it will innervate are further down the arm. The muscles that it supplies include the Biceps, Coracobrachialis, and brachialis. These muscles are mainly elbow flexors, however the corachobrachialis crosses the shoulder and has a role in resisting anterior dislocation of the shoulder. The sensory area that can be affected is the oustide of the forearm.

Mechanism of injury to the Musculocutaneous nerve include: Compression, muscle hypertrophy, direct blow, fracture, anterior dislocation of the shoulder, and shoulder surgery. Side note: I have a patient that had this nerve cut during rotator cuff surgery last Memorial Day. He's still coming in for treatment.

The structures that this nerve innervates include the supraspinatus and infraspinatus as well as the glenohumeral joint itself. These muscles are very important as they are two of the four rotator cuff muscles and are primary external rotators of the shoulder. The sensory effect of this nerve are larger too. Pain in the posterior shoulder and radiating down the arm as well as numbness/tingling in the top of the shoulder.

Mechanism of injury to this nerve are similar to the previous: Compression, Direct blow, presence of a space occupying lesion, and Traction due to scapular protaction+ horizontal adduction.

Bringing it all together: Looking at the two nerves, you will see that the C5,C6, and C7 nerve roots are involved in each. Armed with that knowledge, we can surmise that Carp has bulging discs in at least one of these levels, which would explain why they originally believed the symptoms were coming from the bulging disc.

As far as I know, it hasn't been made clear exactly which nerve Carp is having problems with, but armed with the knowledge Rick Hummel gives us here, I believe that the problem is in the suprascapular nerve (as Silent Bob suggested in the comments of the main thread today). Carp is having shoulder weakness and had made vague comments about pain and weakness in his shoulder earlier this spring.

The mechanism of injury is another key diagnostic tool here: Suprascapular nerve injury occurs through combined scapular protraction and horizontal adduction. This is the position the scapula and humerus are in at the end of the throwing motion, which explains why Carp had relief with a period of rest and progressed with low effort throwing. Once he began to throw off of a mound at or near full speed, he began stressing the nerve again and his symptoms returned.

What does all of this mean for Carp? It means that somewhere Joe Strauss is grinning like a possum eating poopy because this is the worst case scenario for this situation. Rest is going to be Carp's best treatment. Postural exercises to improve control of the scapula during the throwing motion and decrease the stress placed on the nerve during the throwing motion will also be beneficial. He will also receive more anti-inflammatory medications and possibly a steroid injection to decrease any inflammation in the area. If Carp sits for two months and begins throwing, and is symptom free, he may be back in three months. If he fails in a comeback attempt, expect him to be deciding between another surgery and retirement.

Just for fun: here is a link to some clinical diagnostic tools for testing these peripheral nerves and several others in case you decide you want to try to diagnose yourself.

Soapbox moment: Reliance on MRI's for diagnosing the cause for these types of symptoms is a bad practice. MRI's would show that half of VEB has bulging discs and many are asymptomatic. Just because one has bulging discs, doesn't mean that the discs are the cause of the symptoms. I see entirely too many patients that have had an MRI and have been told they have bulging or herniated discs and they believe they have some permanent disability that will never allow them to live pain free. Sadly, many of them end up receiving unnecessary surgical interventions that do not correct the issue because THE BULGING DISC WAS NEVER THE PROBLEM!!!

Information contained in this post that isn't linked came from either my brain or Moore and Dalley's Clinically Oriented Anatomy. Mark Dutton's Orthopaedic Examination, Evaluation, and Intervention used sparingly