For better and worse, the development of smart phones and social media networks has forever changed the nature of reporting from Spring Training. One of the double-edged swords brought about by this revolution in information sharing is the Spring Training pic, often shared via Twitter. The downside of the tweeting of pics from Spring Training has already been memorialized by the creation of a very enjoyable Tumblr, "Bad Spring Training Twitpics." There has been a bit of a TMZ-ification of the coverage from Arizona and Florida, complete with shaky handheld video footage and all-but-indecipherable pics taken by camera phones. That being said, with so many pictures taken by media types, some fun images, however grainy or pixilated, are often captured. One such image, featuring Yadier Molina and the other Cardinals catchers, was tweeted on the Fox Sports Midwest Twitter feed today.

Fox Sports Midwest first tweeted that Molina and the other catchers were discussing catchers masks at length. It then followed up with photographic evidence: 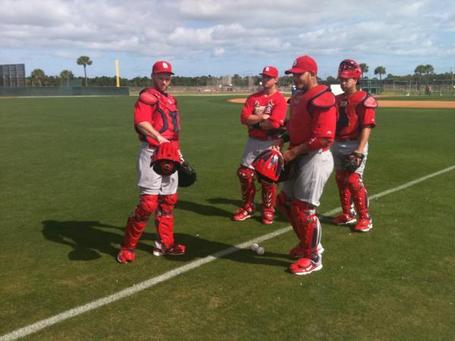 Unfortunately, Fox Sports Midwest did not live-tweet the conversation between the four backstops regarding their tools of ignorance. Through its reptilian Spring Training source, however, we at Viva El Birdos have gotten our hands on a recording of the conversation and transcribed it for our readers.

TONY CRUZ: I like your red mask, Koyie, it's pretty.

BRYAN ANDERSON: Yeah, it really pops against the green fence when you're catching.

YADIER MOLINA: I think you need a navy accent on it, man. In Memphis, the Redbirds' colors are red and navy like the Cardinals. Navy is the predominant road color and red is the predominant home color. That's why I've got navy on mine, see?

HILL: What? Yadi, I've caught for years with the Cubs in the big leagues.

MOLINA: Si, I know. As I say, it's "Senor Molina" to you, former-Cub-minor-leaguer. This isn't Chicago. We win here.

HILL: Okay, um, Senor Molina...Do you think I should get some blue on this mask?

MOLINA: Yes, it will look nice with the navy away caps. Unfortunately, we can't get personal designs like hockey goalies. I had originally wanted to get a World Series trophy on mine, but it's not allowed. So I got it tattooed on my throwing arm instead.

ANDERSON: Really? Can we see it?

MOLINA: Sure. Here it is. [Molina lifts up his sleeve to reveal his new tattoo featuring the World Series trophy.]

MOLINA: I had my tattoo artist design it. He's the same one that designed my neck tattoos.

CRUZ: Do ya think he'd design one for me?

MOLINA: A neck tattoo? Of course! I'll give you his card.

CHRIS CARPENTER: And if you don't like the design, let me know. My wife designs some really $%^#$@& awesome tattoos.

MOLINA: Ahhh! Carp! C'mon man, you scared me! How long have you been standing there!?

CARPENTER: I've been here the whole time, waiting for one of you $%^#$@& to stop chit-chatting and catch my bullpen session.