A Look at the Stats for Randy Choate, the St. Louis Cardinals' Newest Relief Pitcher

Lefty reliever Randy Choate, the Cardinals' latest addition, should be used by manager Mike Matheny to face lefthanded batters frequently and against righthanded batters as rarely as possible.

Share All sharing options for: A Look at the Stats for Randy Choate, the St. Louis Cardinals' Newest Relief Pitcher

Early in the Hot Stove, the Cardinals identified lefthanded relief as one of their offseason priorities. With the club's nucleus returning after a run to Game 7 of the NLCS, it is an understandable priority, especially since lefthanded relief was such a problem for the club throughout the 2012 season. J.C. Romero was signed in the offseason and given his unconditional release early in the year. Lefthanders Barrett Browning, Sam Freeman, and Brian Fuentes all threw innings out of the Cardinals bullpen before being removed from the 25-man roster. In the postseason, Marc Rzepcynszki was the Cardinals' only southpaw in the bullpen.

The Cardinals have forcefully committed to a two-lefty bullpen with the reported signing of Randy Choate.

If ever there was a Lefty One Out GuY, Randy Choate is it.

2012 was a typical season for Choate in that he performed much better against lefthanded batters than righthanders and was used much more often against lefties than righties. The following chart shows Choate's 2012 numbers with the Marlins and Dodgers.

Choate has also been very effective at inducing groundballs throughout his career. His career groundball rate is 58.3 percent and has been below 57 percent in just two seasons. In each of the past four seasons, Choate has posted a groundball rate over 60 percent. 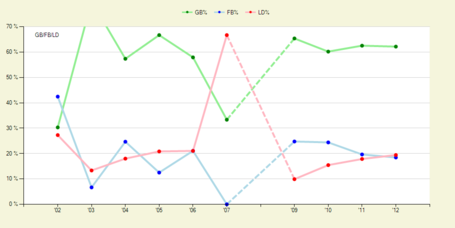 Coincidentally enough, after being traded from the Marlins to the Dodgers in the deal more famous for involving Hanley Ramirez, Choate made his Dodgers debut against our beloved Redbirds. Here's video from that appearance that shows the funky delivery that makes Choate so effective against lefthanded batters.