I think I could watch that mesmerizing GIF of Yadier Molina throwing out Dee Gordon forever. It should be the GIF that retires all GIFs, a perfect, fluid, beautiful defensive play that illustrates how amazing Molina's defense is. [Editor's note: We wrote more about this GIF on Sunday.]

Molina used to be much more about the glove than the bat, but has obviously forged himself into an MVP contender who can hit for both power and average while also providing the ridiculous defense exhibited above. It's an exceptionally weird path, in that he debuted at 21 and was utterly lost at the plate for three years before arduously getting better and better and adding to his offensive profile, outperforming anything he even seemed remotely capable of when he was drafted in 2000. Indeed, since World War II, among catchers with more than 400 games played in their first four seasons, Molina's 70 OPS+ is dead last, a testament to his defensive skills (which kept him in the lineup) and to how far he's come.

So incredible was this transformation that the Cardinals inked Molina to a five-year, $75 million extension before the start of last season, and it didn't seem at all unreasonable. Obviously, after hitting .315/.373/.501 with 22 homers, a 137 OPS+, and being worth somewhere between six and a half and seven wins to St. Louis, everybody's got to be feeling pretty good about that extension right now, which takes Molina through his age-34 season with an option on age-35.

Unfortunately, all the time Molina spent refining and honing his offensive game he also spent squatting down behind home plate. It's become conventional wisdom that catchers tend to be at risk of collapse around 32, but that's not a function of age as much as it is a function of catching so many innings by then. Among catchers who are kneeling in the big leagues in their teens and early 20s, we see that decline start much earlier. Consider the following chart of the yearly rWAR of every player who caught more than 1000 games before turning 30: 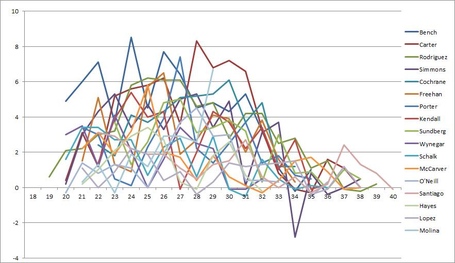 Yeesh. On second thought, don't consider that unsightly, ungodly mess. Here, look at this instead, which is an average of the same data: 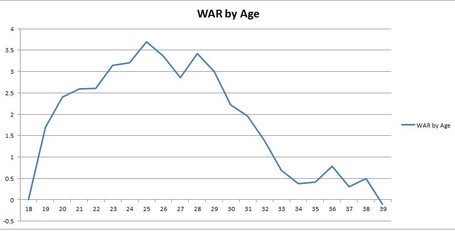 As you can see, these players hit their peak between ages 25 and 28, but then begin a steady, precipitous drop right about nowish in Molina's career. That should be scary if you're a Cardinals fan and your team has signed its catcher through his age-35 season at a premium rate.

Aside from the all-time greats on the list like Bench and Carter and the modern guys like Jason Kendall and Ivan Rodriguez, you're probably also familiar with Ted Simmons, Darrell Porter, and Tim McCarver, Cardinals greats of yesteryear who were heavily used as young catchers.

McCarver was a bonus baby who signed for $60,000 at 17 years old, tore through two levels of the minors and got in eight September games for a bad Cardinals team in 1959. St. Louis sent him down for more seasoning, but he was back for good at 21 in 1963. In the low-offense Sixties, McCarver proved a competent hitter, even finishing second in the NL MVP race in 1967. After being dealt to the Phillies in the infamous Curt Flood/Dick Allen deal, he missed more than 100 games with a broken hand, but bounced back in 1971, at 29. But at 30, it started coming off the rails for Timmy and he would start more than 100 games in 1973 for the last time as a major leaguer. That said, he did become one of the better backups in the game upon returning to the Phillies in 1975.

Simmons debuted at 18, won the starting job for St. Louis at 20, and began hitting at 21. He started 151 games behind the plate in 1973 when he was just 23 years old and 148 games two years later. At one point he played more than 150 games a year for seven straight seasons. Simmons was an offensive force throughout his time with the Cardinals, and even had a productive couple of years in Milwaukee after he was traded to make way for Porter. He began transitioning to DH in 1983. The next year, at 34, he fell off of a cliff offensively and would finish as an unproductive reserve first baseman and pinch-hitter in Atlanta.

By the time the Cardinals acquired Porter, he was 30 and not the offensive force he had been in Kansas City. How much of that drop-off was because of aging and how much reflected the toll drug abuse and alcoholism took on him physically is hard to know. He stopped hitting after two seasons in St. Louis, and struggled to stay healthy throughout 1985. After the World Series (in which Jim Sundberg was able to slide past him to score the winning run in Game 6), Porter was released. He spent two more years as a backup in Texas before retiring at 35.

The Cardinals obviously made the deal with Molina with the first couple of years in mind, before it was entirely clear how much tremendous young talent they had in their minor league system. Holding on to one of the game's best receivers made a lot of sense at the time, especially since their commitment to him stops before he turns 35. Still, there's no doubt that Molina's clock is ticking, and that the heavy load he's borne will take its toll eventually. If the other catchers who took on so much work in their early careers are any indication, it will happen sooner rather than later.

Michael Bates is one of SBN's Designated Columnists and one of the minds behind The Platoon Advantage. Follow him at @commnman.