Say it with a lisp.

Share All sharing options for: Shelby Miller Swings and Mythes

I work in a field that requires most of my peers to have a college degree. Almost everyone I interact with has some level of post-high school education. Some merely took a few college classes; others have Masters degrees and the occasional PhD. That was part of what made it so perplexing when one of my co-workers showed me what he believed to be "photographic evidence" of Bigfoot.

It wasn't a random photo from the internet either. No, this was the next level in belief. Bigfoot was not merely real, he/she was a local phenomenon in the St. Louis area. I'll spare you the details of that conversation but it was one of those indelible moments when I realized that not only did this myth exist but it was such a charismatic and captivating idea that people would ignore logic and reason in order to invest themselves in it.

I ask today that you choose not to believe in myths about Bigfoot. Shelby Miller will be playing the role of Bigfoot. [1]

We'll stick to the minor league data to debunk this one. In 2010, Miller pitched in the Quad Cities as a 19 year old. He walked 7.5% of the batters he faced. Splitting his time between Palm Beach and Springfield in 2011, that number rose to 9.2%. There were few public floggings of the walk rate in 2011 and the explanation for that is quite simple. Miller was busy striking out a ridiculous number of batters in Palm Beach prior to his promotion. And, more importantly, he wasn't allowing a significant number of home runs.

In Memphis last year, Miller's walk rate was actually down from 2011 to 8.4% of the batters he faced. It's easy to debunk the idea that Miller had a walk problem because, well, he didn't. What is less clear is whether he had a "control" problem. Part of the difficulty there is the nebulous definition of control. If Miller was having control issues, they were manifesting in his home run rate rather than his walk rate and the home run rate was a legitimate problem. Gopher balls exploded in Memphis for Miller. [2]

It's worth remembering that, for most of the year, there were not any significant prospects on the position player side in Memphis. St. Louis robbed that lineup of it's talent and left them the likes of Cedric Hunter, Lou Montanez and Jamie Romak. The Memphis Cardinals finished with a .396 winning percentage 26 games out of first place. If Miller grooved a few to many fastballs, I'd have a hard time blaming him.

This was a pervasive rumor that began with a few tweets from prospect analysts and spread quickly. It happened, not coincidentally, while Miller was pitching some of his worst baseball in Memphis. Let's take a quick note from Baseball America's 2011 Top Prospect List:

Miller embraces his Texas gunslinger lineage and has the heat and mound presence to match. His overpowering fastball cooks consistently in the mid-90s and spikes to 97 mph.

Miller would be pilloried last season for that first line but we'll cover that shortly. The important part is that we've got Miller sitting in the mid-90s and touching 97. With those parameters, what did his 2012 pitch f/x data look like? Working with Brooksbaseball's data set, we can see that Miller threw 181 four seam fastballs in 2012 (including the post season). His average fastball velocity was 93.8 mph. His peak velocity was into the 97 vicinity as well. 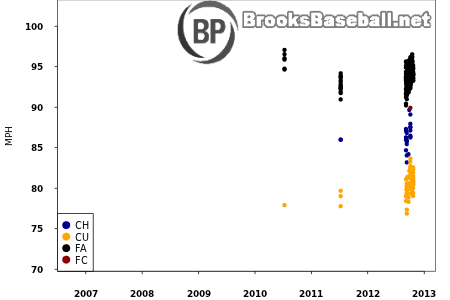 Was Miller's velocity down at points during the season? Probably. I happened to be in attendance for his debut pitching performance. I immediately commented on his velocity (based on the stadium gun). That "issue", if ever there was one at all, was corrected by the time the post season rolled around. Concerns about Miller's velocity moving forward just aren't well founded.

Quasi-Myth #3: Shelby Miller is a tool.

Here are some things I know about Shelby Miller:

I think my favorite is the third bullet point. Stop the presses! A young man showed up to baseball camp TOO FIT! Some speculate he's worried about ... [gasp] looking good. I don't remember Lance Lynn or Matt Adams receiving such breathless commentary on their physique relative to what was written about Miller.

It's not a free pass but Miller was drafted out of high school, handed millions of dollars and separated from whatever structure (family, friends, school) had previously inhabited his life. Since then, he's done some very typical things that guys his age will do. I'd probably be more worried if Shelby Miller wasn't a tool at his age. (I know I was.) There's a delicate tipping point for fans where articles about whether Miller is having some struggles in Memphis can transform into him being uncoachable or stubborn.

Realistically, fan's sentiment will have little impact on his career. His coaches know whether Miller is responding to coaching in a suitable manner for someone at his age and talent level. Being a first round draft pick, however, brings this kind of coverage. That doesn't make the din of falsehood ring any less gratingly. So when, 2013 rolls around and questions about Miller's preparedness start to arise or questions about his control or his velocity, just remember the facts:

Shelby Miller did just fine as a prospect in 2012. Let yourself enjoy what he does in the majors in 2013 without preconception -- there's just no need to worry about Bigfoot or Shelby Miller.

[1] The only possible way to make this transition more awkward would be a segue into Bigfoot mating techniques. I just thought it was important to share a story about my co-worker (with a college degree!) who explained to me how Bigfoot lived in his area. I'm pretty sure VEB has exactly 41 weekend readers this offseason so I can't damage traffic any further with my terrible transitions.

[2] There's a sample size argument to be made since Miller capped off his performance in Memphis with something like a 4 walks in his last 50 innings. To me, this more reflects the instability of data sets that are less than a single year's sample. It's certainly possible (a la Lance Lynn in 2010) that Miller picked up something or fixed a mechanical problem late in the season.