Four Surprises for the Future

As the 2012 season comes to a close in Detroit, the Cardinals have built a steady future for their organization.

Share All sharing options for: Four Surprises for the Future

Joe Kelly
Key Stats: 51.7% GB Rate, 7.3% Swinging Strike Rate
2012: Entering the season, Kelly was pitching in Memphis with lots of questions about when the Cardinals would move him back tot he pen. His mediocre secondary offerings were often cited in conjunction with a modest strikeout rate in the minors. Kelly, however, kept doing what he'd always done -- generate ground balls -- until injury struck the St. Louis rotation and he got his shot. 16 starts and 107 innings later, Kelly had an above average ground ball rate and a 2:1 K:BB ratio. He ended the season with an above average groundball rate but a below average swinging strike rate.
The Future: If 2012 was a correction of overly pessimistic about Kelly's future as a potential starter, it would be entirely unsurprising to see the pendulum swing too far in the other direction. Kelly struggled badly against left handed hitters this season who posted a .313/.389/.528 line against him. Kelly as a starter remains largely dependent on his ability to neutralize opposite handed hitters.

Jon Jay
Key Stats: .355 BABIP
2012: Jon Jay just hits balls. He's accumulated enough at bats that we can say, with some degree of certainty, that he posses an above average skill on balls in play. More aptly put, there is some component of Jay's game (bat control, speed, velocity off the bat, etc) that leads to a consistently higher batting average on balls in play.
The Future: The big question for the future probably doesn't come next year but may come in 2014. That question is where does Oscar Taveras play. With Beltran's departure, there's an opportunity in RF and little urgency to trade Jay who would be entering his first year of arbitration. Jay looks like an integral part of the team for the near term regardless of Taveras' arrival.

Trevor Rosenthal
Key Stats: 97.6 mph Average Fastball
2012: No player raised their stock in the same way that Trevor Rosenthal did. With a fastball that touched 100 mph, he surprised in much the same way that 2011's Lance Lynn did. A few extra miles on the fastball, a chance in the big league bullpen and never looking back led to a big year for the 22 year old.
The Future: Rosenthal showed very little of his secondary offerings. He's still a starter in the long term but the question will be just how good of a starter he'll be. There will be a lot of temptation to view him as a better prospect than Shelby Miller but it's an arguable case. Miller maintained better numbers throughout the minor leagues until last season when he stumbled in AAA while Rosenthal excelled in a relief role. There's a case for either player -- it's a pedigree versus recent history argument -- but both prospects still have all the appearances of top shelf starters. For fun, here is Rosenthal's velocity chart from the season 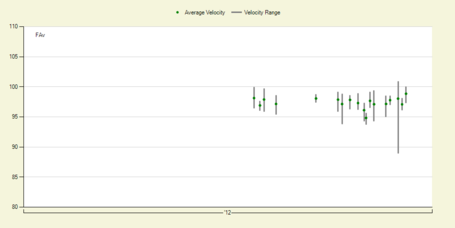 Matt Carpenter
Key Stats: 340 PAs, .355 wOBA
2012: Carpenter ended the season with the same wOBA as Carlos Beltran and a batting profile remarkably similar to that of David Freese. This is not the Matt Carpenter of the minors with little power and incredible plate discipline. The new Matt Carpenter traded away some free passes for an improved ability to drive the ball or so the story goes.
The Future: No where do the Cardinals have a more perplexing problem of what to do with a player than with Matt Carpenter. In the outfield, Matt Holliday and Carlos Beltran represent equal or better hitters and clearly better defenders. At first base, even with the loss of Lance Berkman, Allen Craig's bat justified far more playing time. Add to that the impending arrivals of Matt Adams and Oscar Taveras and Carpenter is a man without a home. In the immortal words of Pinky and the Brain: "What'll we do tonight, Brain?" "Try and play second base." While this experiment seems marginally more likely to succeed than Skip Schumaker's transition, that's more attributable to Carpenter's prowess at the plate than in the field.

So, who surprised you the most this year? Lance Lynn as a starter? Pete Kozma as a hitter? There are plenty of choices on the 2012 Cardinals. The second part to that question is whether you think they'll continue that surprising performance.