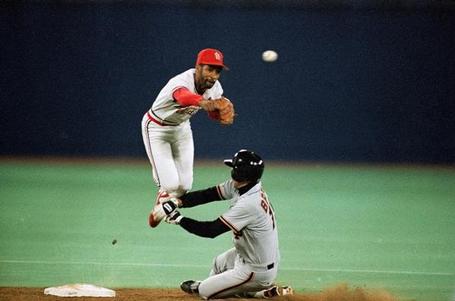 In these, his age 34-38 seasons, Ozzie continued to accrue numbers despite entering the normal decline phase for baseball players generally and middle infielders in particular. 1989 was likely Ozzie's second-best season. His defense was otherworldly according to Total Zone. He posted a 3.1 dWAR (!), which was almost half his value. With a batting line of .273/.335/.361/.696 (97 OPS+), Ozzie accrued 6.3 rWAR that year.

That Milt Thompson is third on this cumulative rWAR list tells us all we need know to about these years in Cardinals history. Rather than focus on Thompson, though, I wanted to mention the emergence of Ray Lankford. Over this time period, Lankford posted a line of .265/.346/.417/.763 (113 OPS+) and totaled 39 homers. In 1991, No. 16/12 led the league in triples and, in 1992, Lankford had the dubious distinction of leading the league in times caught stealing (24) and strikeouts (147). It won't be until the next five-year segment that Lankford emerges as the Lankford we (especially DanUp) remember fondly.

The Cardinals acquired Mark McGwire in 1997. In 1998, he rewarded them for having done so with one of the greatest seasons in baseball history. McGwire hit for a .299 average and led the league in OBP (.470), SLG (.752), OPS (1.222), OPS+ (216), walks (162), and, of course, home runs (70). That Sammy Sosa won the National League MVP award is a travesty. McGwire's 1998 was worth 7.2 rWAR. McGwire's production was so ridiculous and the Cardinals that preceded and surrounded him (not named Lankford or Jordan) so lackluster that he is ranked third on this cumulative rWAR list for the five season from 1994 through 1998 despite his only having played in St. Louis for one full season and a couple of months. Does anyone know when the Cardinals will install his statue outside of Busch?

To witness the MV3 season of 2004 was to live an entire summer constantly pinching oneself to see if it was a dream. It wasn't. Our trio of WARmongers really did lay waste to the National League in historic fashion. The numbers speak for that fireworks-filled season.

Rather than five seasons, the final block of time is only three. Matt Holliday's rWAR total comes over about two and a half seasons wearing The Birds On The Bat. His line during that time is .314/.394/.543/.937. He has been elite but not Pujolsian. Despite declining production, Pujols is still a ridiculous talent. These last three seasons, his line is .313/.409/.598/1.007.

Adam Wainwright has only pitched in two of the three seasons that make up this cumulative rWAR exercise, yet his two-year 11.9 rWAR total is only 0.9 rWAR behind Carpenter's three-year total. This is a great indicator of just how excellent Wainwright was in 2009 and 2010. During those two seasons, he pitched 463.1 innings with a 2.53 ERA (157 ERA+) while posting a K/9 of 8.3 and BB/9 of only 2.4. His K/BB ratio was 3.48. The Cardinals' 2012 fortunes largely depend on the return of a healthy Wainwright, capable of dominating like he did prior to his elbow injury and corrective surgery.

It will be interesting to see whether Holliday, Carpenter, or Wainwright can surpass Pujols in rWAR by the end of 2013.