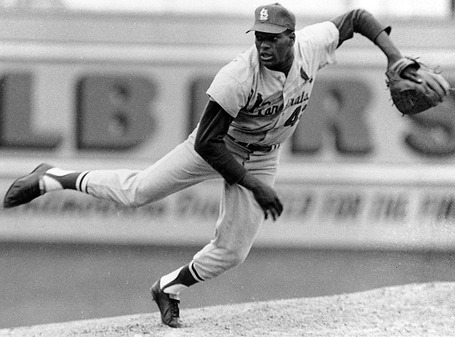 A little while back, Dave Schonefield wrote a terrific post on ESPN's Sweet Spot blog, "Five Best Players in Baseball: A History." Using cumulative WAR for five-year periods, Schoenfield listed the five top players in Major League Baseball. The post inspired me to do something similar for the St. Louis Cardinals. Using Schoenfield's formatting, I began in 1959 (the eve of the El Birdos era, in a way) and worked forward to the present day.

If one is ranking the best Cardinals, one must include Bob Gibson. It's non-negotiable. However, Schoenfield's list included no pitchers, a fact that hardly seemed equitable to me. I began to wonder why this was. Was it because Fangraphs does not have pitcher WAR prior to 1974? Was it simply an exercise in position player valuation? Does Schoenfield have a problem an intermingling of pitchers and position players ranked by WAR? So, I used Baseball-Reference's WAR (rWAR) rather than Fangraphs WAR (fWAR) because Fangraphs lacks WAR prior to 1974. (Posts on WAR in general and the difference between rWAR and fWAR can be found here.)

This post was a fun trip down memory lane that produced some interesting results. I thought it would prove a fun late-winter read. But, it ballooned in size. Because of it's length, I cut it in half. The first half, which is below (and still rather long), covers 1959 through 1988. I decided it best to divide it after the conclusion of the Whiteyball era. The second half, covering the years 1989 through 2011 will be posted later.

Over this time period, Boyer was exemplary. He hit for average and power while also posting a walk rate of 10.2%. His slash line of .304/.375/.504 equaled a .384 wOBA. On top of this elite offensive production, Boyer also provided first-rate glove work at the hot corner. He was head-and-shoulders above his teammates during this five-year stretch.

Bob Gibson's 34.0 rWAR led the Cardinals over this five-year period as well as all Major League pitchers. This should not be at all surprising to Cardinals fans who are well aware of the great Gibby's stunning accomplishments over the span of this golden era in the franchise's rich history: four All-Star Game appearances, four Gold Glove awards, a Cy Young, a National League Most Valuable Player award, and Major League Baseball lowering the pitcher's mound.

Joe Torre put together an excellent five-year run for the Cardinals. Torre's best season was his MVP season of 1971. That season Torre posted 6.8 rWAR on the strength of an excellent offensive performance. Torre led the league in BA (.363), hits (230), total bases (352) and RBI (137). While his .976 OPS did not lead the league, it did equal an OPS+ of 171. His bat was worth 9.5 WAR but his glove was worth -2.6 WAR. His poor defense explains the seemingly low rWAR total given his superb offensive production.

Steve Carlton was traded after the 1971 season in one of the worst personnel decisions in franchise history. Even though his 16.1 rWAR represents only three seasons worth of production for the Cardinals. In 1972, his first season with the Phillies, Lefty won the first of his four Cy Young awards en route to accumulating 61.8 rWAR after leaving St. Louis.

The three-way tie of pitchers that expands this five-year span's list to six is an interesting one. Despite accruing the same rWAR totals, Forsch pitched 975 innings to Denny's 729.2 to McGlothen's 681.1.

It should also be noted that 64% of Lonnie Smith's rWAR total from 1979-1983 came in the World Series championship season of 1982. I will also take this opportunity to note that Lonnie Smith was on the Cardinals during every season that Ozzie Smith wore a powder blue away jersey. This makes every powder blue throwback jersey that doesn't read "O. Smith" on its back historically inaccurate. During Ozzie's powder blue jersey days, the Cards had an "L. Smith" and an "O. Smith" but no one with just "Smith" on their jersey back. Majestic is swindling Cardinals fans with the historically inaccurate apparel they are peddling.

In 1987, Ozzie Smith had his greatest season. Ozzie posted the following line: .303/.392/.383/.775 (105 OPS+). He added exceptional defense worth 1.4 dWAR to this batting line and accrued 7.1 rWAR. The Cardinals won the pennant but Andre Dawson robbed The Wizard of what should have been an MVP award because the writers split the Cardinals vote between Jack Clark and Ozzie, who finished in second place.