I don't think anything can express how weird Prince Fielder's free agency experience was quite as well as the company he kept in free agency—the last few days have seen Fielder's nine-year, $214 million deal, which was not a great idea; Francisco Cordero's one-year, $4.5 million deal with the Blue Jays, which, okay, I guess; and Jeff Francis's minor-league deal with the Cincinnati Reds, which, sure.

For my own sake as much as yours and Prince Fielder's (I'm sure it will make a nice keepsake), here's some of what you've missed if your 2012 baseball senses haven't quite kicked in.

The Blue Jays grabbed ex-shortstop Sergio Santos in December, got Cordero a few days ago, and completed their all-name-brand bullpen by reacquiring Jason Frasor, who'd been floating around near the top of their bullpen since 2004, who was ballast in one of the interlocking Edwin Jackson trades.

How poor could the A's possibly be, that they're pawning minor league outfielders off on the Orioles? You don't see a lot of players bought and sold anymore, so I'm going to assume the A's simply put Jai Miller in a prepaid Cash 4 Outfielders envelope, dropped him in the mailbox, and hoped for the best.

Miller is a fifth outfielder who might really be a fourth outfielder, but he's at least a fun one—last year, at 26, he hit .276/.368/.588 in the PCL while stealing 16 bases in 16 attempts and striking out 179 times in 410 at-bats. That's far and away the best season of his career, and entirely unfathomable in the major leagues, but the Athletics have already traded away all the veterans—now they're selling the minor league veterans?

In case you were wondering where all the highly touted slugging prospects of 2004 were.

I've been getting a little antsy about baseball season lately, and I think part of that might be because the other NL Central teams have been relatively active—the Cardinals, by comparison, have seemed done for a while. The Zambrano trade makes perfect sense for the Cubs, though it's terrible that things got so bad that it does—Zambrano only makes sense for a team without a lot of money and resources that wants to compete, and that's not the Cubs.

This just made me antsy because, so far as I can tell, the Cubs stole a great first baseman for a pitching prospect with shoulder problems.

Of course the Cardinals weren't done after all.

January 10: The Chicago Cubs sign Paul Maholm for one year, $4.75 million with a team option.

Last year I was somehow convinced that Jake Westbrook at two years with a team option was kind of a bargain.

This is the team that got Daric Barton, Dan Haren, and Kiko Calero for two years of Mark Mulder. 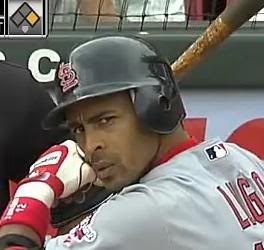 Last year Mortensen had a 9.42 ERA in 15 PCL starts. (Shane Peterson had a nice little year, though!)

I know the Cardinals must like Kyle McClellan, and I can understand wanting him back on the team, but last year Colon struck out 7.4 batters per nine innings and qualified for the ERA title with an ERA+ of 111. He was a genuine free agent and he cost the Athletics $2 million.

Omar Vizquel will be 45 next year. He was signed out of Venezuela the same year Michael Jordan was drafted; if Ozzie Smith had stuck around as long as Vizquel has, he probably would have gone to Spring Training with Albert Pujols.

Okay, okay. Jamie Moyer is just a year older than Michael Jordan. He was the ninth-oldest player in the American League in 2001.

Should Moyer make a Major League appearance in 2012, we'll remain seven Oldest Players removed from the beginning of time. When he was a rookie in 1986, the oldest player in baseball was Phil Niekro. When Niekro was a rookie in 1964, it was Warren Spahn. Spahn, in 1942, causes a setback in Joe Heving, who got a late start and only goes back to 1930, but it's okay because Heving gets us Jack Quinn, who was a rookie in 1909; Quinn begets Arlie Latham, the Freshest Man on Earth, who takes us back to 1880; Latham brings us to Joe Start, who was 33 when the National League was founded, and that's all the baseball there is.

I had to check, after I put this list together, to make sure I wasn't sleep-general-managing for the Reds, which is not to say that all of these are good decisions—it's just that all of these are the kind of decisions I would make if I were a GM based simply on remembering that I liked a player once, or thinking, "Man, haven't thought about Joel Guzman in a while." This might offer some insight into Walt Jocketty's style.

Quickly: Brackman is the equivalent of the Cardinals' Shooter Hunt acquisition; Madson was a fine job of taking advantage of an evaporating market, although I'd rather have Roy Oswalt; Mahay is cool because it means someone will still show up in this year's video game as Roster Pitcher 99; Navarro is not as obviously superior to Koyie Hill as I thought; Guzman once slugged .522 as a 19-year-old shortstop in AA and was, last year, a 27-year-old first baseman in AA; Harris is the ultimate Walt Jocketty signing; and Francis would have made a nice Bryan Augenstein-style pickup if it really only took a minor league deal.