When Ryan Theriot Was A Shortstop: The Golden Age

Share All sharing options for: When Ryan Theriot Was A Shortstop: The Golden Age

Oftentimes a golden age isn't recognized as such until it ends. After the Bronze Age collapse Homer discovered in the conflicts of the Trojan War the patterns of heroes and gods—the foundations of new myths. After the middle ages the renaissance was devoted to a rediscovery of the beautiful roots of Western Civilization, taken for granted in their own time.

Yesterday, Ryan Theriot reminded us that a wonderful time was gone, gone forever—out of our hands permanently, lost in the stifling embrace of nostalgia, of hindsight, of memory. "When I was playing shortstop," he said, serving as his era's tragic spokesman, "we were in first place. I know that. It is what it is."

He speaks with the heavy weight of the reluctant survivor—fallen Adam, disgraced Fitzgerald. I want to share that burden with Ryan Theriot, and I want you to share it with me. So allow me to remind you of that golden age, lately past.

1. A division lead for the Cardinals. It is what it is.

Things were different in the summer, when Ryan Theriot was shortstop. 3D movies? Do you want Harry Potter ($378) or Transformers 3 ($351)? if you liked cars, you could have seen Cars 2 ($189) or Fast Five ($209). How about a remake of every Steven Spielberg movie at the same time? Super 8 made $127 million! Forget it, Hollywood—these returns, they are what they are.

3. A healthy professional basketball league. In June, while Ryan Theriot was starting at shortstop for the Cardinals, the NBA had what many consider to be its best finals ever, when Dirk Nowitzki and the Dallas Mavericks upset the Hated Miami Heat in six games. Labor relations have disintegrated since Rafael Furcal was installed; now it looks like the league might not even play this year.

Needless to say, it will be what it will be. Have fun in China, Wilson Chandler—I hope you won't miss Twitter. 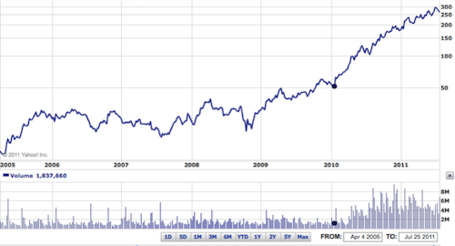 Morning in America (for Netflix stock owners) (and Netflix users, once Roku came out.)

It is what it is. It was what it was.

It's weird to see such an ostensibly disappointing Cardinals team at 84-69, but the more I think about it the more I think this is right—this is the way these Cardinals have been disappointing all along. It's not that they're a terrible team, or even a just-average one; they've had great years from Matt Holliday and Lance Berkman, Albert Pujols looks more or less like the last down-season-Pujols we've seen. The pitching's good, the bullpen's young.

Now that the on-field underperformance is gone—they're two games over their Pythagorean record now—we can be disappointed a little more purely in the way the season's turned out. The win-now move has helped the Cardinals win now, but not enough to really justify it; the team's played well, but it seems, in hindsight, clearly worse than the Brewers.

The disappointment's not about the on-field product any more; I'm not even bothered by Tony La Russa's managerial style, though I realize I hold the minority opinion. The disappointment's about how the Cardinals continually undermine that on-field product. Now they're close enough that trading Brendan Ryan, who's led the Mariners in batter WAR, could be the difference-maker; now they're close enough that it seems absurd that Miguel Batista was in a position to make 26 appearances, or Ryan Franklin to blow four saves.

Mainly, though, now that the on-field underperformance has shown up less frequently I'm willing to forget about all of this for the rest of the season. There's not a lot of baseball left this year whether the Cardinals win the Wild Card or don't; if they don't have a plan for next year, well, I'll wait until I have to wait until next year to write another jeremiad about it.

Kyle Lohse just outpitched the best pitcher in the world. He did it decisively, with genuinely great peripherals; he did it dramatically, pitching around Nick Punto's defensive miscue extravaganza;  and he did it with his bat, too, while he was at it. Let's stick with that for the day—it's what Ryan Theriot would have wanted.