Share All sharing options for: Lance Lynn: A History

The Cardinals have been stretched thin in the bullpen this year. With the utter meltdowns of both Ryan Franklin and Miguel Batista plus injuries to Bryan Augenstein and Eduardo Sanchez, pre-season depth on the right side of the bullpen quickly turned into a thin spot. The Cardinals recently augmented their pen with Lance Lynn who has appeared in 5 games but has been rather impressive.  While Lynn was and likely will be in the future targeted as a starting rotation prospect, he's been an interesting arm out of the pen.

Lynn was drafted with the 39th overall selection in the 2008 draft, which was headlined by Brett Wallace now with the Houston Astros.  Advertised as a big, durable, workhorse starting pitcher, Lynn was effective with the location and command of his pitches rather than any overpowering stuff. Baseball America's pre-draft comments on Lynn:

Lynn mixes all four pitches [fastball, slider, curveball, changeup] with command and pitchability, making him a safe bet to be a fourth or fifth starter and an innings-eater in the major leagues within a few years. Lynn was drafted by the Mariners in the sixth round of the 2005 draft and should improve on that this year. While never stellar, scouts are impressed with his undeniable track record of success.

And, true to form, Lynn moved quickly through the system finishing his draft season in Quad Cities after a stop in Batavia. The following year, he would rocket through three levels from Palm Beach all the way to Memphis.  Lynn's results were always good but never great with a strikeout rate that generally resided somewhere in the 7K/9IP area and a walk rate about half of that. He generated a slightly above average number of groundballs for what can only be described as a thoroughly effective and mediocre set of results from a scouting perspective. That's not to say Lynn wasn't good, he was. But he was never great and he never flashed moments of being more than what he looked like at draft time: a back of the rotation starter.

At the end of 2009, I spent some time reviewing video of Lynn.  Re-reading the section on his delivery, I don't see many of the same quirks from 2009 in his major league delivery. The hand no longer pushes the ball but acts as a more natural whip extension of his arm. He's better about focusing on the catcher's target as well. If these are small changes that the Cardinals have made to his delivery, I'm impressed.

The fastball from 2009 sat around 90mph (more on that in a moment) and would touch 92mph.  He's always had two different varieties of his fastball (as most pitchers do) and the second features more movement to it. This may be an early iteration of the cut fastball that he currently throws.  Lynn complemented that with a curveball and a changeup. While neither are what could be called plus pitches, the ability to throw them when and where he wants helps the pitches to be more effective.

2010 was an interesting year for Lynn. In the first half of the season, he was a mess. Battling some nagging minor injuries, he routinely got shelled allowing hits in bunches capped off by some big homeruns. Things started to change in the second half of the year climaxing with an incredible final minor league game. Lynn tossed 7 innings on September 10th against the Texas Rangers' AAA affiliate in Round Rock. Lynn would allow 3 hits and just 1 run while striking out 16. It had taken Lynn 5 games at the start of the season to reach 16 strikeouts. In the second half of the season, Lynn managed 3 separate double digit strikeout performances. Something was different.

In fact. Lynn had made some changes to his mechanics that led to a velocity game. Farm Director John Vuch shed some light on this earlier this year:

Since earlier in the year he would sit at 90 MPH with the occasional 92-93,  the gain in velocity is significant, at least in terms of where he finished the season.  Much of Lynn’s success stems from the deception in his delivery, which allows his fastball to "jump" out of his hand, making his fastball a swing and miss pitch.

Going from a 90mph fastball to a 92mph fastball is significant and it has changed the look of Lynn's arsenal. He's not just an average stuff control pitcher but has the ability to, on occasion, reach back for a 96mph strikeout fastball.  Lynn will still focus on mixing his pitches and generating groundouts off his sinker but his fastball has taken an unexpected step forward with the mechanical tweaks.

Lynn has thrown 146 fastballs in the majors this year with an average velocity of 92.3 mph.  He's supplemented that with a cut fastball, a curveball and a changeup.  He's shown a nice tight release point which is critical to the deception of his offspeed pitches. 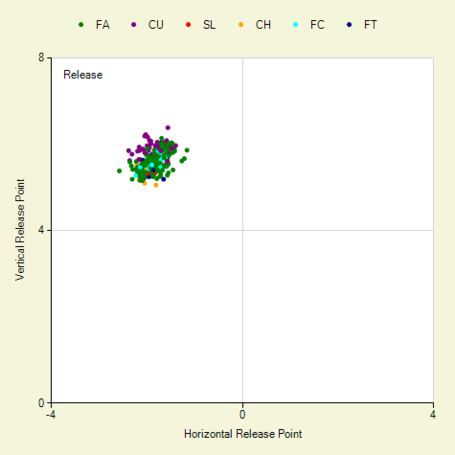 While Lynn has pitched just 16.1 innings in the majors so far, he's struck out a healthy 16 batters against 4 walks. The addition of a pitcher in the pen who can effectively pitch multiple innings with strikeout stuff and keep the club in close games has been a welcome addition to the team. Lynn's performance has to endear him to a managing group that may have openings in the 2012 rotation to fill. Lynn may also have made a case to be the first line of defense should a 2011 starter go down with an injury.

Lynn hasn't been with the organization for terribly long. In less than three years, he's gone from Batavia to the St. Louis bullpen and become an intriguing arm for future consideration.