How Do You Fix What Isn't Broken

Share All sharing options for: How Do You Fix What Isn't Broken

"Losing stinks," said Carpenter, who said, however, he had no doubt his team would respond.

After dropping seven in a row, at least Chris Carpenter maintains faith in the soul of the baseball club. The reality is that the club is on a nasty skid with key players repeatedly coming up empty both on offense (Colby Rasmus) and defense (Ryan Theriot, Albert Pujols).  The last seven games is a demonstration that teams can lose in a variety of ways. It's something that's easy to forget -- we'll build the narrative of our losses around just a few individuals once the season is over -- but, in the midst of these seven games, the team likes to show us it's range. A new loss, a new heartbreak each night.

"I don't know what the deal is. I thought I had good stuff. It's been good for a while. I didn't pitch well enough to win."

Chris Carpenter had a record of 16-9 in 2010. He was barely a step behind Adam Wainwright as staff ace.  In 2011, he's currently sporting a 1-7 record. Most of us do not consider pitching wins as an explanatory statistic anymore but there is still a reflexive reaction when you hear that a player is 1-7.

This feels like an understandable sentiment from Chris Carpenter because, frankly, I don't know what the deal is either. His fastball velocity is steady compared to previous years, but he's getting terrible results on it.  According to the Texas Leaguer's pitch f/x site, Carpenter's whiff rate on his fastball is nearly twice the league average. Fangraphs' paints a slightly more descriptive story with their mappings of the pitchf/x data last night. 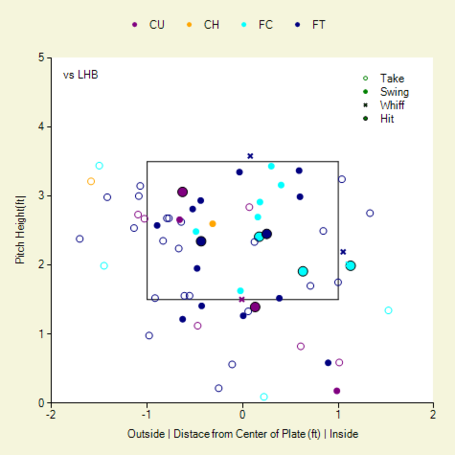 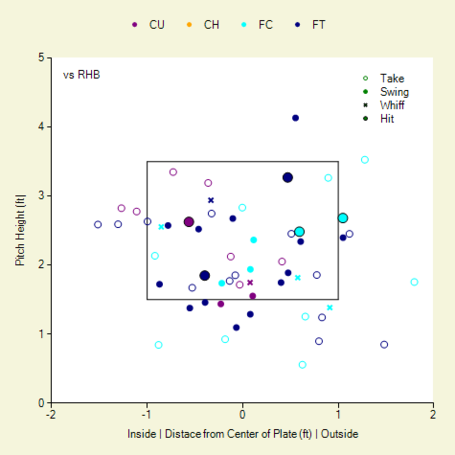 Carpenter's peripheral stats are very similar to last year and remain very good if not elite. He's posting a 3.52 FIP on the back of a slightly improved strikeout rate.  He continues to average 6 IP on the season per game and while that's not fantastic, this is part of what happens with a downgraded defense.  The one change is a 6% drop in his groundball rate from 51% to 45%, which would be the lowest rate of his career.  While that's a substantive drop, it's too much to read into at this point in the season; it's not unreasonable to suspect that it will be closer to career norms as we progress through the season.

But Carpenter added, "I'm not going to sit here and fret on what's going on. I'm not scared to call myself out or question myself if I'm not doing what I need to do. There are all kinds of silly things you can analyze in a game, but if I sit there and do that, I'll have no chance to pitch the next time. I'll drive myself crazy."

That's a good sentiment to hear from a starter especially when they don't seem to be doing anything actually wrong but rather are affected by some outcome of bad luck and poor defense.  It may not be as simple as that but there's nothing obvious in Carpenter's performance to warrant the results that he's gotten so far.

Yet there's a part of me that still can't quite shake the visceral reaction to his results this year. The part of me that is least rational that wonders whether we're watching the decline of Chris Carpenter.  The story of the Cardinals in the 2000s is, while not equal parts, about the emergence of Albert Pujols and, in the latter half of the decade, the late take-off of Carpenter's career. At age 36, I know that Carpenter won't last forever but I wonder what "not forever" is. 1 year? 2 years? 5 years? I don't know. It's not even clear to me, after looking through the statistics and pitch charts above that he's truly in decline. Some part of me continues to wonder though.

Carpenter probably won't ever be among the all-time greats in the Cardinals pantheon of pitchers. Guys like Bob Gibson, Bob Forsch or Dizzy Dean had both longer and more storied careers than Carpenter has had with the Cardinals. Carpenter does fit nicely into that niche that Matt Morris did. A good pitcher that spent the bulk of his career in St. Louis and was beloved by the fans in his day. The sun hasn't quite set on Carpenter -- this year probably isn't his twilight -- but how much longer he'll be an impressive pitcher, bad results or not, remains to be seen.